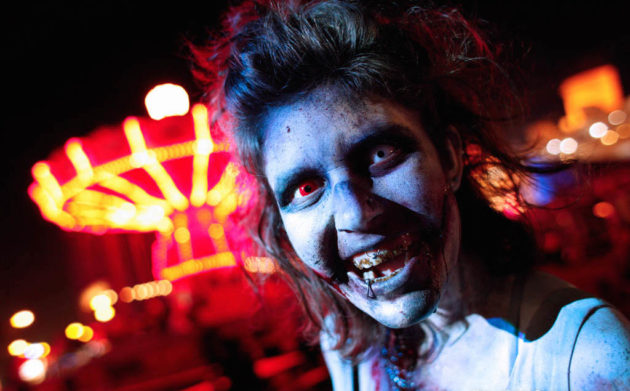 “Halloween is no longer hostage to the fall, and a growing number of consumers are beginning their shopping prior to September 1,” said David Markland, Midsummer Scream Executive Director. “Halloween is an over $7 billion business in the United States, and nowhere is it more popular than Southern California – home of the most diverse haunts and popular events in the nation. Midsummer Scream has not only found the perfect timing but also the perfect location.”

A highlight of Midsummer Scream will be its main stage auditorium, which will accommodate more than 1,000 horror fans gathered to witness a world-class lineup of panels and presentations, including exciting reveals and announcements for the 2016 Halloween season in California.

Highly-anticipated panels and attractions include:

Jim Henson’s Creature Shop has been creating family-friendly scares and whimsical creatures around the world for 37 years. Midsummer Scream will welcome this incredibly talented team as they discuss the history of their craft, as well as what the future has in store for their style of puppetry and design.

Some of the sinister minds behind the acclaimed anthology series American Horror Story check in at Midsummer Scream to discuss the gritty world of Hotel, which aired from October 2015 to January 2016 on FX. From makeup design and effects to stunning character development and overall look, the panel will celebrate the terrifying beauty of Hotel Cortez and its other-worldly residents.

The Museum of Paranormal History will be a unique collective of vendors, experts, authors, and local tour guides specializing in all things supernatural and including more than a dozen exhibitors. Bearded Lady’s Mystic Museum will showcase their vintage Ouija boards, ParaXplorer Project, Dearly Departed Tours, Haunted Vegas Tours, Planet Paranormal known for their wide variety of fantastic radio talk shows, Orange County Ghosts and Legends tour and paranormal investigation group, and the Winchester Mystery House will have actual pieces from the famous Northern California mansion on display – some for sale – at their booth. To ensure nothing gets out of hand, members of the Southland Ghostbusters cosplay group will be present throughout the weekend.

Universal Studios Hollywood’s Halloween Horror Nights will host a presentation by the guiding force behind Halloween Horror Nights in Los Angeles, John Murdy and Chris Williams. Knott’s Berry Farm will lift the veil and share some of its spine-tingling plans for Scary Farm 2016. Six Flags Magic Mountain will provide fans an amazing preview of things – and screams – to come this Halloween at Fright Fest, and Queen Mary promises a major new character and maze reveal, giving Midsummer Scream fans an exclusive look at the horrors rolling in with the tide this fall at Dark Harbor.

Rounding-out the paranormal offerings at Midsummer Scream will be two additional panel presentations: Haunted Theme Parks on Saturday, July 30 will delve into infamous ghost stories surrounding the attractions at Disneyland, Knott’s Berry Farm, Six Flags Magic Mountain, and Universal Studios Hollywood. On Sunday July 31, Spirits with Spirits: Haunted Bars of Southern California will be on tap, serving up a round of blood-chilling stories about the most “active” drinking holes in the region.

Oingo Boingo Dance Party will headline the Noche de los Muertos (Night of the Dead) celebration and ‘80s costume contest on Saturday, July 30. With an underlying thematic style commonly centered around Dia de los Muertos, the band became synonymous with Halloween in Southern California in the ‘80s and ‘90s, performing shows at Irvine Meadows each October. Tickets to the 21 and over event, as well as a limited number of passes for a personal meet-and-greet opportunity with the band, are available now at MidsummerScream.org.

Hall of Shadows will occupy more than one third of the Halloween festival’s 90,000 square-foot show floor this year, giving thousands of fans the opportunity to preview nine stand-alone home and professional haunt experiences each day. In addition to the haunted attractions, the Hall of Shadows will feature Toxicity, an immersive experience by Larry Bones (creator of makeup applications and prosthetics at Universal Studios Hollywood’s Halloween Horror Nights.) Set within the walls of a genetics lab that has suffered a toxic explosion, twisted, mutated scientists will “attack” guests from all sides. Meanwhile, high-energy performances by the Decayed Brigade slider team will take place three times each day; “sliding” is a scare tactic created approximately 40 years ago at Knott’s Scary Farm where performers push their bodies and the laws of gravity to the limit to create a heart-stopping fright.

Joe Kleimanhttp://wwww.themedreality.com
Raised in San Diego on theme parks, zoos, and IMAX films, InPark's Senior Correspondent Joe Kleiman would expand his childhood loves into two decades as a projectionist and theater director within the giant screen industry. In addition to his work in commercial and museum operations, Joe has volunteered his time to animal husbandry at leading facilities in California and Texas and has played a leading management role for a number of performing arts companies. Joe previously served as News Editor and has remained a contributing author to InPark Magazine since 2011. HIs writing has also appeared in Sound & Communications, LF Examiner, Jim Hill Media, The Planetarian, Behind the Thrills, and MiceChat His blog, ThemedReality.com takes an unconventional look at the attractions industry. Follow on twitter @ThemesRenewed Joe lives in Sacramento, California with his wife, dog, and a ghost.
Share
Facebook
Twitter
Linkedin
Email
Print
WhatsApp
Pinterest
ReddIt
Tumblr
Previous articleJason Pontius Joins Smart Monkeys as Senior Manager of Special Projects
Next articleAVAILABLE LIGHT Provides Architectural and Exhibit Lighting Design for Grammy Museum in Cleveland, Mississippi