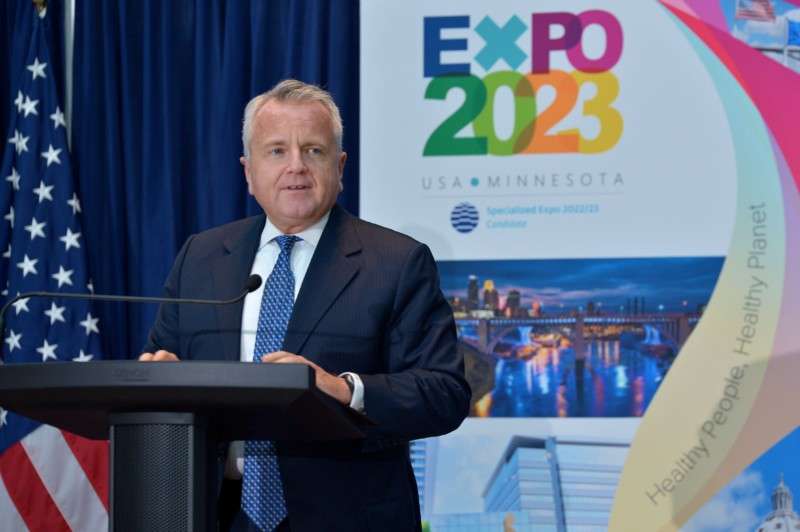 “There is a hunger throughout the planet for things that bring us together. We believe this Expo is one of those opportunities” said Ritchie.

The speakers shared their support for Expo 2023 to be in Minnesota and thanked ambassadors across the world for showing their support in helping the USA bid reach the final round.

“Many have moved mountains to get us here to this point” said Deputy Secretary of State Sullivan. “I look forward personally to traveling to Paris next month to cast the U.S. vote in support of this expo, the first in more than 15 years.”

Coordinated by the Bureau International des Expositions (BIE), large, six-month expos are organized every five years with one smaller, three-month “Specialized Exposition” held in-between. The United States seeks to host the 2023 Specialized Expo in Minnesota focused on health and wellness. The U.S. bid enjoys strong bipartisan support at the national, state, and local level. In May, President Trump signed legislation authorizing the United States to rejoin the BIE in support of the Expo 2023 USA-Minnesota bid. Citizen groups from across the state and from all corners of the nation have supported this effort to host the first Expo in the United States in nearly 40 years. The United States is competing with Poland and Argentina to host the Specialized Expo. The BIE General Assembly will select the 2023 host city at its November 15th meeting in Paris, France.

Joe Kleimanhttp://wwww.themedreality.com
Raised in San Diego on theme parks, zoos, and IMAX films, InPark's Senior Correspondent Joe Kleiman would expand his childhood loves into two decades as a projectionist and theater director within the giant screen industry. In addition to his work in commercial and museum operations, Joe has volunteered his time to animal husbandry at leading facilities in California and Texas and has played a leading management role for a number of performing arts companies. Joe previously served as News Editor and has remained a contributing author to InPark Magazine since 2011. HIs writing has also appeared in Sound & Communications, LF Examiner, Jim Hill Media, The Planetarian, Behind the Thrills, and MiceChat His blog, ThemedReality.com takes an unconventional look at the attractions industry. Follow on twitter @ThemesRenewed Joe lives in Sacramento, California with his wife, dog, and a ghost.
Share
Facebook
Twitter
Linkedin
Email
Print
WhatsApp
Pinterest
ReddIt
Tumblr
Previous articleRCI to Manufacture and Distribute Clip ‘n Climb Climbing Structures in the Americas
Next articleExpo Live: Dubai 2020’s unique program – James Ogul reports