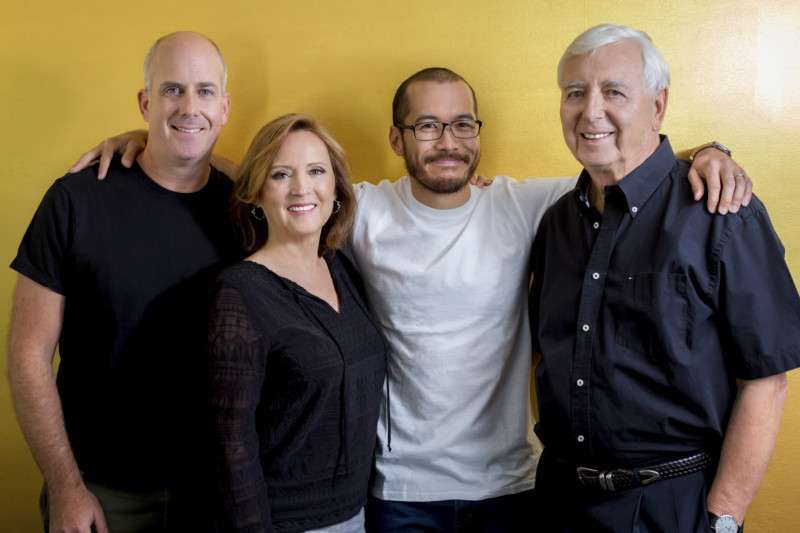 A new era of Miziker Entertainment

Miziker Entertainment is celebrating its 35th anniversary with all eyes focused on the future. The new era of the award-winning, Burbank-based show design and production firm is igniting a future even more spectacular than its storied past. Led by the dynamic partnership of Chief Creative Officer Ryan Miziker and CEO/Executive Producer Charlotte Huggins, the company has adapted to recent industry shifts by offering its signature expertise in parades and shows to operators worldwide, advancing the craft of oversized kinetic puppetry, and having recently patented an innovative, modular float and chassis design that promises to revolutionize digital signage and parade float technology.

“For 35 years, we have enjoyed producing a vast portfolio of shows and parades, media-based attractions, and memorable guest experiences for clients around the world,” said Ryan. “Now, more than ever, we’re bringing the best creative minds and innovative product offerings to every project we undertake.”

Like most themed entertainment firms with decades of experience, Miziker Entertainment has faced the challenge of an industry that is evolving.

“We took a good, hard look at the way the industry is changing and recognized that we can’t act only as creators and producers anymore,” said Charlotte. “We invested in our own products and systems, and challenged our expectations about what Miziker Entertainment could become. From there, we developed creative strategies, new systems, and unique products that we believe will propel our company and clients forward.”

This philosophy/methodology is reflected in the working environment in Miziker Entertainment’s Burbank, California offices. The walls of the studio are covered in storyboards and sketches for new live shows, multi-media entertainment and parades in the works. Fabric samples, wire frames, sketches, storyboards and miniature sculpts give the conference room the feel of a workshop rather than a meeting space. But that is the way they like it – because Miziker is a perpetual workshop, drawing on its rich history and experience to gauge and respond to the needs of the global markets it serves today.

Parades and spectaculars are at the heart of the Miziker Entertainment story. Founder Ron Miziker built his career producing live entertainment and parades for Disney theme parks, the Olympics, and NFL Super Bowls, among many others. He is recognized for his role as project director alongside creator Robert Jani of the beloved Main Street Electrical Parade at Disneyland and Walt Disney World.

Today, parades remain the company’s sweet spot and more specifically Ryan Miziker’s passion. He is a lifelong student of people and places, especially the way they celebrate. Around the world, passages of seasons, religious observances, and cultural festivals all use parades to mark important dates and unite their communities. Ryan also recognizes the unique and important role parades play in today’s theme park experience.

“Parades are a grand expression of the human experience,” said Ryan. “Theme park parades tap into that part of our cultural history. Disney pioneered the genre; now, people of all backgrounds around the world can come together in a beautiful park, in a shared experience, to be entertained, celebrate life, and laugh together – every single day of the year.”

Technological sophistication is the hallmark of shows produced by Miziker Entertainment. In 2018, the Journey of Lights Parade at Chimelong Ocean Kingdom – created and developed by Miziker to realize Chimelong’s vision – was honored with a TEA Thea Award for Outstanding Achievement (Live Show). This nighttime cavalcade represented a leap forward in the evolution of mobile spectaculars with the first parade-wide lighting event made possible by powerful new show control systems and over one million color-changing LEDs. By offering precise control over park-wide show lighting, audio, and special effects, the project suggests a new precedent for live entertainment events that can be applied in myriad ways and that would have been impossible only a few years ago. Based on the expressions of interest Miziker has received, “parade wide” may well soon become “resort-wide.”

Rooted in the traditions of worldwide Carnival celebrations and drawing on their decades of live event design experience, Miziker Entertainment has added oversized, kinetic puppetry to their suite of services. In 2017, the company introduced Mas Fiesta, a business unit that designs and fabricates kinetic puppets and costumes for parades and live entertainment.

“We recognized a lack of resources in the market for fabricating these elaborate pieces,” said Ryan, “so we decided to develop something that would fill that gap – something we could call our own. We brought our experience to bear and began to design and build them ourselves.”

Miziker’s approach to puppetry springs from the low-tech traditions of the craft while making use of high-tech solutions to advance it. Mas Fiesta puppets are constructed of lightweight carbon fiber, laser-cut fabric, and fiber-glass sculpture which provide complexity, durability and performance versatility for each figure. The result is greater unity between costume and performer.

Another way Miziker Entertainment is adapting and advancing its brand offerings is through the creation and patenting of unique technology products for applications in themed entertainment, based on their understanding of industry needs. “People come to us for technological solutions,” said Ryan, “and we’re able to apply our creativity and show design expertise along with the new technologies we develop.”

“NOMADS is a revolutionary platform for product and event promotion at live events, for storytelling along parade routes, and for producing unforgettable mobile events, dance parties, and shows,” said Sean. “Utilizing Videro’s unique digital ecosystem, NOMADS provides networked control over every aspect of show action including lights, video, sound, interactivity, messaging, and special effects, all packaged into a system that is easy to deploy and use in any type of venue.”

More details about NOMADS will be revealed in Orlando this November at IAAPA Expo 2019, at the Panasonic booth, #857. Panasonic will celebrate Miziker Entertainment’s 35th anniversary at the booth on Thursday, November 21, 3:00-5:00 p.m.

Another key ingredient in the Miziker business mix is special venue film production. When Charlotte Huggins partnered with the company several years ago, she brought with her two dozen years of film production mastery (in addition to theme park experience) that has broadened the portfolio of services. Charlotte supervises Miziker’s live show and media productions, offering her own blend of filmmaking and attractions expertise.

Charlotte’s pioneering work in film production includes a wide variety of theatrical releases, 3D live action and animated features and special venue cinema. Her work includes commercial features such as the “Journey to the Center of the Earth” series and the Grammy-nominated “Metallica Through the Never,” as well as giant screen and ride films for the likes of Disney, de Efteling, Aquarium of the Pacific, IMAX, and OCT.

Adam Ellison, a feature film producer who worked with Charlotte on “Journey 2” and the Metallica film, experienced her passion for themed entertainment first-hand – so much so that he was soon drawn to join the Miziker team as a project director. “Before I met Charlotte, I couldn’t have imagined myself doing anything other than film,” said Adam. “But now I’m working with artists who are so passionate, who work with such an incredible level of freedom to create, it brings me real joy. She showed real perseverance in opening my eyes and convincing me to come over to this world. I am very thankful that she did. “

Charlotte released her 11th giant screen movie at the Giant Screen Cinema Association annual conference in September 2019. “Back From the Brink: Saved From Extinction” is a documentary directed by award-winning nature filmmaker Sean Casey, with Jen Casey as Charlotte’s producing partner, and executive produced by the Russo Brothers and the Huayi Brothers. The film, sponsored by The Nature Conservancy, follows several endangered species and the human initiatives that have allowed them to return from near extinction.

An exciting area of strategic growth for Miziker is in the Pacific Rim. They have shepherded projects in Japan, China, Korea, Singapore, and Malaysia. Each country and region presents richly different cultures and projects, but they have in common, as Ryan said, “a remarkable hunger for original ideas and live entertainment. Every trip to Asia is worth it for the opportunity to create brand new concepts for an audience that yearns for entertainment all their own.”

Miziker has formed invaluable relationships throughout the region. Their close partnership with Chimelong Group, a leading theme park developer in China, has given rise to many opportunities to create new experiences for Chinese theme park guests. “Chimelong Group has made live shows an important part of their guest experience,” said Sean. “And we believe it is absolutely a huge factor in their continued growth at both their theme parks and their waterpark.”

Miziker China is the company’s satellite office located in Guangzhou. Lei Zhenchuan is Miziker’s full-time project coordinator on-site in China. With his background as a filmmaker and producer, both in the US and China, Lei is indispensable in developing a variety of international projects for the company.

With 35 years behind them, and a passion to chase down new opportunities, Miziker Entertainment’s core strength continues to be the people that make up their team.

“Our number one resource and joy as a company is our people,” said Charlotte. “Themed entertainment is on the rise as theme park attendance worldwide continues to grow. We are proud to have a company of artists, producers, technicians, composers, lighting and sound experts; all of them bring an expertise for creating unique and memorable guest experiences.”

“Everyone has a voice here at Miziker,” said Sophia Chan, the company’s newest Associate Art Director. “There is an openness and enthusiasm for getting the details right. We all want to create projects that will spark joy.”

As the company moves into its 36th year, Ryan is confident that his team of creative and technical pioneers will meet every challenge and exceed expectations. “When Ron started out on his own 35 years ago,” Ryan reflected, “his vision was to create the most spectacular live entertainment studio in the world. Our incredibly talented team has taken hold of that vision, infused it with expertise and passion, and made it their own.” • • •

Freddy Martin ([email protected]) is a writer, storyteller, and independent consultant. He began his theme park voyage as a skipper on the Jungle Cruise at Disneyland. Freddy co-hosts the Themed Attraction Podcast with Mel McGowan of Storyland Studios and is a regular contributor to InPark as well as ThemedAttraction.com. He also blogs at FreddyMartin. net.

Joe Kleimanhttp://wwww.themedreality.com
Raised in San Diego on theme parks, zoos, and IMAX films, InPark's Senior Correspondent Joe Kleiman would expand his childhood loves into two decades as a projectionist and theater director within the giant screen industry. In addition to his work in commercial and museum operations, Joe has volunteered his time to animal husbandry at leading facilities in California and Texas and has played a leading management role for a number of performing arts companies. Joe previously served as News Editor and has remained a contributing author to InPark Magazine since 2011. HIs writing has also appeared in Sound & Communications, LF Examiner, Jim Hill Media, The Planetarian, Behind the Thrills, and MiceChat His blog, ThemedReality.com takes an unconventional look at the attractions industry. Follow on twitter @ThemesRenewed Joe lives in Sacramento, California with his wife, dog, and a ghost.
Share
Facebook
Twitter
Linkedin
Email
Print
WhatsApp
Pinterest
ReddIt
Tumblr
Previous article
Alterface: Dark rides
Next article
Joe Kleiman: Fan power