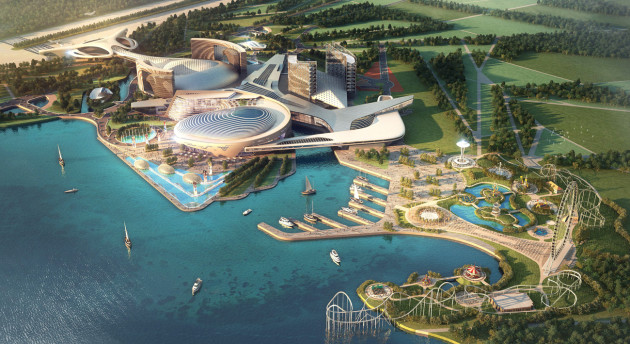 Uncasville, CT, USA and Incheon, South Korea, (June 30, 2015) — The Mohegan Tribal Gaming Authority (“MTGA” or the “Authority”) operator of Mohegan Sun, Mohegan Sun Pocono and Resorts Casino Hotel, and Incheon International Airport Corporation (“IIAC”) today announced that they have finalized a concept agreement and unveiled new details of its proposed partnership to develop, build and operate a first-of-its-kind gateway entertainment district adjacent to the airport on the IBC-2 site in Incheon, South Korea.

The proposed resort will be named the Inspire Integrated Resort (“Inspire”), and will create an epicenter for Korea’s growing entertainment, tourism and hospitality industry. The project will lead a paradigm change from shopping-centered tourism to culture and entertainment-based tourism, will connect with the airport’s transit tour program, and will create synergy with the “Paradise City” development located on IBC-1 site adjacent to the airport. Upon its completion, the visionary integrated resort will create the only “Airport City” development and will firmly establish Incheon International Airport as among the most unique destinations in the world while providing significant benefits to South Korea’s economy.

Bobby Soper, President of MTGA, said, “We are pleased to progress to the next stage of our proposed partnership with IIAC by finalizing a conceptual agreement on Inspire, a visionary, first of-its-kind resort that represents the next major evolution in the global hospitality, tourism and gaming industries. We are excited to extend the unique Mohegan Sun brand with the support and collaboration of IIAC as we work to develop a must-visit destination. We also look forward to playing a meaningful role in contributing to Korea’s dynamic economy.”

President and CEO of Incheon International Airport Corporation, Park Wan-su, said: “We have enjoyed working with the Mohegan Tribal Gaming Authority and are pleased that we share the same vision for enhancing Incheon Airport. We believe that when combined with our existing services and amenities, Inspire will not only cement Incheon Airport’s position as the best airport in the world but also as a top leisure destination in Asia. MTGA’s performance track record and ability to attract world-class entertainers will help usher in an exciting new phase for Korea’s flourishing tourism industry. We look forward to benefiting from MTGA’s expertise and collaborating with our existing partners and 40,000 employees to execute on this vision and deliver exceptional experiences for our guests.”

Inspire will feature world-class entertainment and hospitality attractions. The development is expected to house more than 300,000 sq. meters of gaming and entertainment space and will also include, but not be limited to the following features:

The first phase of development for Inspire is expected to contribute $1.6 billion (USD) in Foreign Direct Investment to South Korea. At the same time, approximately 24,000 jobs are expected to be created during the first phase of development of the resort. Construction costs estimated for the development of the private FBO are $35 million (USD), approximately $320 million (USD) for the entertainment arena and $140 million for the theme park, Inspire is expected to provide significant benefits to the South Korean economy and advance the Korea Tourism Organization’s (KTO) goal of attracting 20 million international visitors annually by 2020. Details of Inspire will be available in the coming days at www.MoheganSunInspire.com.

The Authority and IIAC expect to agree to terms on a scope of work proposal by the end of the year. Consummation of the conceptual agreement and development of the project is subject to certain governmental and regulatory approvals, including, but not limited to, MTGA securing a gaming license from the Korean Ministry of Culture, Sports and Tourism.

Joe Kleimanhttp://www.themedreality.com
Raised in San Diego on theme parks, zoos, and IMAX films, Joe Kleiman would expand his childhood loves into two decades as a projectionist and theater director within the giant screen industry. In addition to his work in commercial and museum operations, Joe has volunteered his time to animal husbandry at leading facilities in California and Texas and has played a leading management role for a number of performing arts companies. Joe has been News Editor and contributing author to InPark Magazine since 2011. HIs writing has also appeared in Sound & Communications, LF Examiner, Jim Hill Media, and MiceChat. His blog, ThemedReality.com takes an unconventional look at the attractions industry. Follow on twitter @themedreality Joe lives in Sacramento, California with his fiancé, two dogs, and a ghost.
Share
Facebook
Twitter
Linkedin
Email
Print
WhatsApp
Pinterest
ReddIt
Tumblr
Previous articleCarnegie Mellon University to Host TEA SATE ’15 on September 17-18
Next articleExperience Rock History with Rare Artifacts During Rolling Stones’ EXHIBITIONISM at London’s Saatchi Gallery