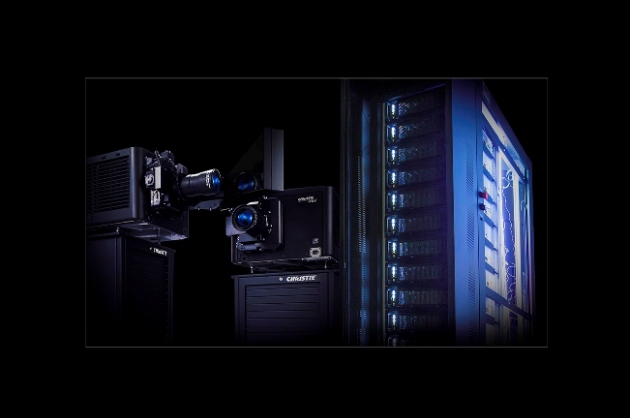 Galveston, TX, USA —  D3D Cinema and Moody Gardens have announced the grand opening of the MG3D Laser Theater at Moody Gardens, the first institution in the world to feature a giant screen 6-Primary (6P) laser projection system. Audiences will now experience films on a world-class 60 by 80-foot white screen – the largest in Texas – at nearly three and a half times brighter than the current industry standard, with vibrant colors and new 3D glasses technology. The 6P laser-illuminated 4K-resolution 3D dual projector system is manufactured by Christie, a world leader in advanced cinema technologies and visual displays. The 6P eyewear is designed and manufactured by Infitec GmbH. The 1.4 gain premium white screen was provided by MDI.

“This installation marks a great step forward for giant screen projection technology – and Moody Gardens has once again taken a pioneering step with D3D to create a truly great theater experience for their audience,” said Don Kempf, president of D3D Cinema. “Their continuing willingness to forge ahead with new cinema technology and branding will help push the museum cinema market forward into a new era of cinema clarity, brightness and profitability. This industry has been waiting for lasers for a long time.”

“There is a bit of nervous excitement with being the first institutional theater in the world to implement laser technology,” added John Zendt, President and CEO of Moody Gardens. “But, when I walked into the theater and saw my screen light up like never before, I was thrilled! And that first impression was only at 75 percent of our brightness capability. I can now happily invite my giant screen colleagues to come and see firsthand what D3D, Christie and Infitec are capable of delivering on an 80 foot screen. To be first to market is very exciting. But the results themselves are amazing and it is an experience our guests will certainly appreciate.”

“We can confidently say that Christie’s 6P laser design is a real breakthrough for the industry,” said Don Shaw, senior director of product management, Christie. “Our non-flashing 6P architecture is without question the most light-efficient 3D technology on the market, providing four times the 3D brightness versus the competition, and enhanced color gamut and a remarkable contrast ratio as well. On a speckle-free premium white screen, Moody Gardens has achieved a peerless cinematic presentation.”

Infitec’s new 6P glasses deliver a startling 90 percent efficiency – unsurpassed in the industry. It’s the perfect complement to the 80 foot wide screen in the MG3D Theater, which is now capable of light levels over 16 foot-lamberts in 3D (measured through Infitec’s glasses). This is many times brighter than the theater’s previous 3D 70mm system and far exceeds any “ultra-bright” industry standards.

“We’re thrilled to be a part of this project,” said Markus Fritz, COO of INFITEC GmbH. “We had to move a few mountains to make this happen but the results are incredibly gratifying. INFITEC is now uniquely positioned to provide 6P eyewear technology as giant screen venues turn to laser 3D in the coming years. Moody Gardens is now a flagship theater for us, and we will continue to improve on efficiency capabilities and giant screen eyewear designs in 2015.”

“I’m so happy with the final result, the brightness and clarity is amazing,” added Ronald La Faver, President of INFITEC Inc. “The vision of INFITEC on a pure laser based system came true.”

This latest collaboration between D3D and Moody Gardens builds on a longstanding partnership. In January 2011, D3D and Moody co-hosted the first annual Digital Cinema Symposium, showcasing 4K projection technology on a giant screen for the first time, including the first 4K versus 70mm split screen shootout. The following year, at the 2012 Digital Cinema Symposium, D3D showcased the first 4K 3D, 11.1 3D audio, high frame rate demonstration as well as a prototype laser on a giant screen, all industry firsts. The 2012 event was a milestone, marking the first time that industry professionals overwhelmingly acknowledged that a digital presentation exceeded the quality of a 70mm film in a side-by-side comparison. A case study was recently published by D3D and Moody Gardens, illustrating the financial benefits and qualitative success of digital presentation and rebranding.

Joe Kleimanhttp://wwww.themedreality.com
Raised in San Diego on theme parks, zoos, and IMAX films, InPark's Senior Correspondent Joe Kleiman would expand his childhood loves into two decades as a projectionist and theater director within the giant screen industry. In addition to his work in commercial and museum operations, Joe has volunteered his time to animal husbandry at leading facilities in California and Texas and has played a leading management role for a number of performing arts companies. Joe previously served as News Editor and has remained a contributing author to InPark Magazine since 2011. HIs writing has also appeared in Sound & Communications, LF Examiner, Jim Hill Media, The Planetarian, Behind the Thrills, and MiceChat His blog, ThemedReality.com takes an unconventional look at the attractions industry. Follow on twitter @ThemesRenewed Joe lives in Sacramento, California with his wife, dog, and a ghost.
Share
Facebook
Twitter
Linkedin
Email
Print
WhatsApp
Pinterest
ReddIt
Tumblr
Previous articleTwo New Products Introduced by Alcorn McBride at IAAPA Attractions Expo
Next articleMore than $120,000 Raised for Give Kids the World Village at IAAPA Attractions Expo