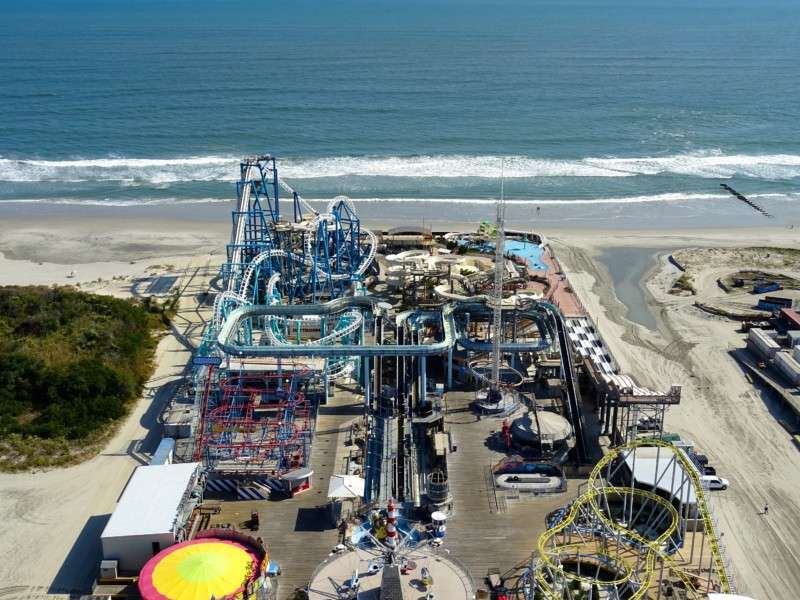 For the second year in a row Morey’s Piers has contracted the New Jersey based MISTRAS Group to complete off-season ride inspections using the Aeryon SkyRanger, a $60,000 piece of equipment that looks like a mechanical spider with four legs.

Typically reserved for oil and gas refineries, this is a relatively new technology within the amusement park industry, and one that increases the safety and efficiency of the inspection process. For years this process involved scaling entire coasters by hand or renting heavy, expensive lifts to achieve necessary access.

“Anything can happen in October, like inclement weather or cold, damp days preventing or delaying the climbing of rides,” says Joe DeLuca, maintenance planner at Morey’s Piers. “Inspections that used to take a month to complete while climbing steel tracks now only take one week and are much safer.

The eight-pound aircraft, using a built-in custom camera, provides high-resolution pictures of tight spaces, odd angles and hard-to-reach areas on rides like the Giant Wheel, which reaches 156 feet high. The photos are sent through an encrypted network to the screen of a pilot’s control unit in real time. They’re also saved to a memory card for examination later. Structural imperfections, like loose bolts or rusted welds, are flagged for repair by the Morey’s Piers grounds crew.

“We can capture the words of your beach read from 70 feet away,” says drone pilot Matt Phillips, pointing to a 30-times optical zoom. A hobby drone, like an iPhone camera, would need to be right on top to get the same shot. “It’s like looking through a telescope.”

Among the challenges of drone inspection are heavy winds (30mph is the threshold) and hawks, who can sometimes mistake a drone for prey and attempt to dive-bomb it. A co-pilot is always on site to watch out for such flight hazards. Seagulls, on the other hand? They’re cool with the tech.

“I feel like they’re impressed,” says Nick Harwood, operations manager with Aetos, the drone division of MISTRAS. “I’m told the machine was once invited by a certain seagull to share a piece of scrap pizza from the boardwalk. We do not promote fraternization during work hours.”

Joe Kleimanhttp://wwww.themedreality.com
Raised in San Diego on theme parks, zoos, and IMAX films, InPark's Senior Correspondent Joe Kleiman would expand his childhood loves into two decades as a projectionist and theater director within the giant screen industry. In addition to his work in commercial and museum operations, Joe has volunteered his time to animal husbandry at leading facilities in California and Texas and has played a leading management role for a number of performing arts companies. Joe previously served as News Editor and has remained a contributing author to InPark Magazine since 2011. HIs writing has also appeared in Sound & Communications, LF Examiner, Jim Hill Media, The Planetarian, Behind the Thrills, and MiceChat His blog, ThemedReality.com takes an unconventional look at the attractions industry. Follow on twitter @ThemesRenewed Joe lives in Sacramento, California with his wife, dog, and a ghost.
Share
Facebook
Twitter
Linkedin
Email
Print
WhatsApp
Pinterest
ReddIt
Tumblr
Previous articleIsland H20 Live! receives Leading Edge Award from World Waterpark Association
Next articleWeihai Huaxia Scenic Spot: Moving mountains