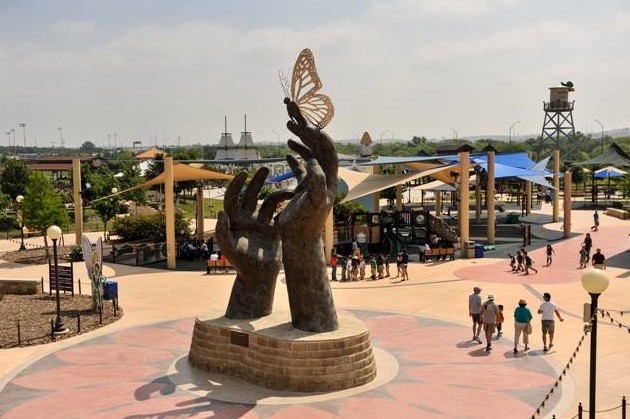 Located adjacent to Morgan’s Wonderland, CRIT USA opened this past November and is already treating 600 children with neurological, muscular and skeletal disabilities from 41 states across the U. S. and five other countries.

The opening-day festivities will include remarks by Gordon Hartman, who along with wife Maggie created Morgan’s Wonderland; entertainment by the Mistick Legion Drumline; a chain of friendship with CRIT USA patients and Monarch Academy at Morgan’s Wonderland students joining hands; a release of colorful butterflies; and a parade for guests through the 25-acre park.

“Morgan’s Wonderland will enable us to carry over therapeutic activities and exercises outside the rehab setting,” said Ricardo Guzmán, CRIT USA CEO.  “For example, the park’s playgrounds can play an important role in physical therapy, supplementing strengthening and climbing activities in a fun atmosphere.  The park also will be extremely valuable in a wide range of occupational and speech therapy interventions.” Celebration of the park’s 5th birthday and the 25th anniversary of the Americans With Disabilities Act will be themes throughout the 2015 season.  Details of a Friday, April 10, Morgan’s Wonderland birthday party will be announced soon.

“Morgan’s Wonderland held its grand opening April 10, 2010, with NBA legend David Robinson and actress Eva Longoria as special guests,” Morander said.  “Since then, we’ve welcomed more than 500,000 guests from all 50 states and 54 other countries.  And recently,  VactionalHomeRentals.com, an affiliate of TripAdvisor, named Morgan’s Wonderland the ‘best family attraction’ in Texas.”

Offering more than 25 elements including rides, playgrounds and gardens for everyone’s enjoyment, Morgan’s Wonderland is the center of a family fun destination now known as Wonderland, Texas.  The former Longhorn Quarry is also the location of Toyota Field, home of the North American Soccer League champions, the San Antonio Scorpions; the STAR (South Texas Area Regional) Soccer Complex, with 13 first-class fields for tournament and league play; and Monarch Academy, a school for students with special needs next door to Morgan’s Wonderland.

Net profits from the Scorpions, Toyota Field and STAR Soccer help non-profit Morgan’s Wonderland meet its financial obligations as well as expand services and programs for the special-needs community. The inspiration for Morgan’s Wonderland came from the Hartmans’ 21-year-old daughter Morgan.  Her soaring spirit despite personal challenges sparked within them a deep desire to create a haven not only for those with special needs but also for their families, caregivers, invited friends and the general public.

“Inclusion is the overarching objective for Morgan’s Wonderland,” Gordon Hartman explained.  “Our vision is to play an instrumental role in helping establish more ultra-accessible family fun parks throughout the nation and the world.”

Comprised of high school seniors and older, the Mistick Legion Drumline performs regularly at Traders Village in San Antonio and at special events throughout the community.  The group also seeks to inspire young percussion players.  For more information, visit www.mistickdrumline.com.

Morgan’s Wonderland is located in Northeast San Antonio a half-mile west of IH 35 at the intersection of Wurzbach Parkway and Thousand Oaks Drive.  In addition to visiting the park’s website, interested individuals can call (210) 495-5888 for more information.