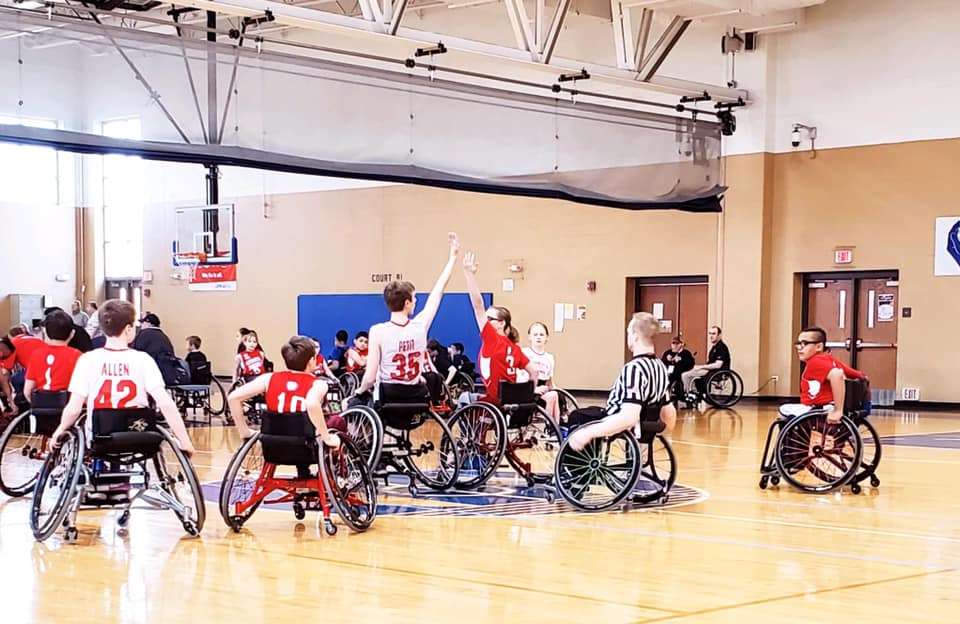 “We’re all about bringing together those with and without special needs in safe, colorful, non-judgmental, barrier-free environments where the common denominator of play leads to acceptance and understanding,” said Gordon Hartman, co-founder of The Gordon Hartman Family Foundation, which spearheaded the parks’ creation.

Morgan’s Wonderland Sports will provide 8,000 square feet of covered space for wheelchair sports – basketball, softball, baseball, football, soccer, pickleball (12 courts) and tennis (six courts).  Two acres of concrete playing surface will be tinted to minimize heat from the sun and striped in accordance with regulation dimensions for the various sports.  Hartman said one of the most-critical aspects of the project will be use of laser technology to pour 2,000 cubic yards of concrete and ensure the playing surface will be completely level.  Weather permitting, Morgan’s Wonderland Sports will be ready for play in early 2020.

Support facilities will include special LED lighting for visually-impaired athletes, wheelchair-accessible restrooms, numerous water fountains, offices and sports fencing for tennis, pickleball and other sports to keep balls in play.

“We appreciate Gordon Hartman’s passion and commitment to bring those with and without special needs together in an inclusive environment,” Dr. Maika said.  “We’re pleased that we could partner with him on his latest project.  This facility will be enjoyed by the students of NEISD and surrounding communities for years to come.”

Morgan’s Wonderland Sports also will accrue to the benefit of Special Olympics Texas’ Summer Games, which Morgan’s Wonderland hosted in May for athletes from all over the state and plans to do so again in 2020, Hartman said.  And the new complex will significantly expand the STRAPS (South Texas Regional Adaptive and Para Sports) program that Morgan’s Wonderland unveiled in 2012.

“STRAPS has been a great success, currently involving several hundred athletes in a dozen sports, and its growth now requires a more-spacious venue,” Hartman said.  “For example, we’ve had to play wheelchair softball in our parking lot, but Morgan’s Wonderland Sports will give us plenty of room for multiple sports.”

Non-profit Morgan’s Wonderland, which is completely wheelchair-accessible, features more than 25 attractions including rides, playscapes and gardens.  It recently qualified for TripAdvisor’s Certificate of Excellence Hall of Fame.  Next-door Morgan’s Inspiration Island offers lots of get-wet fun in the summer sun, thanks to sprays, geysers, dumping buckets and the like.  The splash park last year earned a spot on TIME Magazine’s list of 100 World’s Greatest Places.

Recently-announced Morgan’s Wonderland Camp, now under construction, will provide a summer-camp-like experience for approximately 500 campers with and without special needs at a time in a rustic, Hill Country setting on San Antonio’s northern outskirts.  For more information, visit www.MorgansWonderland.com. Morgan’s Wonderland and Morgan’s Inspiration Island are located in Northeast San Antonio at 5223 David Edwards Drive a half-mile west of IH 35 at the intersection of Wurzbach Parkway and Thousand Oaks Drive.

Joe Kleimanhttp://wwww.themedreality.com
Raised in San Diego on theme parks, zoos, and IMAX films, InPark's Senior Correspondent Joe Kleiman would expand his childhood loves into two decades as a projectionist and theater director within the giant screen industry. In addition to his work in commercial and museum operations, Joe has volunteered his time to animal husbandry at leading facilities in California and Texas and has played a leading management role for a number of performing arts companies. Joe previously served as News Editor and has remained a contributing author to InPark Magazine since 2011. HIs writing has also appeared in Sound & Communications, LF Examiner, Jim Hill Media, The Planetarian, Behind the Thrills, and MiceChat His blog, ThemedReality.com takes an unconventional look at the attractions industry. Follow on twitter @ThemesRenewed Joe lives in Sacramento, California with his wife, dog, and a ghost.
Share
Facebook
Twitter
Linkedin
Email
Print
WhatsApp
Pinterest
ReddIt
Tumblr
Previous articleEntech Innovative Engineering partnering with NASA on development of transparent and translucent moldable composites
Next articleTwo ADG designed parks win Leading Edge Awards from the World Waterpark Association

Six Flags Offers Thrills, Inclusivity and Safety for Everyone