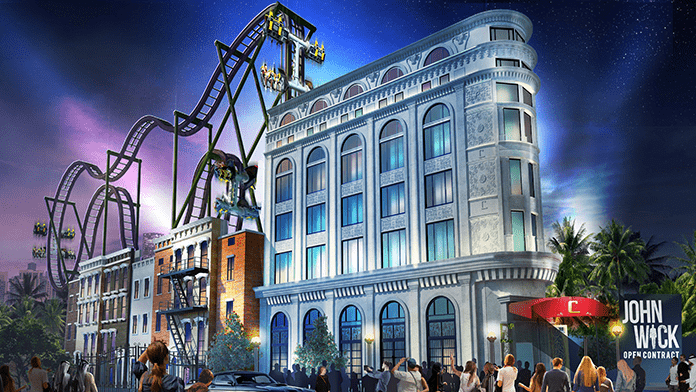 MOTIONGATE™ Dubai will start 2021 on a high note when it launches two brand new, thrilling rides as part of its expansion of the Lionsgate® Zone.

Thrill-seekers and fans of the major motion picture franchises John Wick and Now You See Me, will be able to experience two record breaking new rides in early 2021. MOTIONGATE™ Dubai becomes home to the first ever theme park rollercoaster inspired by the global hit action franchise John Wick, whose first three installments have grossed nearly $600 million at the worldwide box office. The Lionsgate Zone will also introduce the world’s fastest single-car spinning coaster based on the popular twists and turns of heist thriller franchise Now You See Me. The launch of these two, world first coasters will earn MOTIONGATE™ Dubai the impressive record for the maximum number of rollercoasters in a single theme park in the Middle East.

Denis Pascal, General Manager at MOTIONGATE™ Dubai commented: “We’re starting 2021 with a bang and offering our guests never before experienced attractions! We’re continually looking at ways to enhance the MOTIONGATE™ Dubai experience and we cannot wait to break some world records with these two brand new coasters. They will not disappoint even the most daring amongst us.”

Set over a 310-meter track, and reaching speeds of up to 64km per hour, John Wick: Open Contract will deliver up to 2.8 G-force from the 4D free spin coaster. Inspired by the events of the recent films, after stepping inside The Continental, guests will embark on a journey that simulates the epic action of the John Wick world as the coaster races down a 4D track that provides both forward and backward, freestyle spins.

Reaching speeds of up to 70 km per hour, riders of Now You See Me: High Roller will feel like they are part of a daring Horsemen escape as they race to expose the antics of a criminal mastermind. Riders won’t find a more intense coaster experience anywhere due to its drops, non-inverted loops, and Immelmann turn sections which will see riders make a full 180-degree turn after entering a thrilling half-loop section of the track, followed by a half twist. For tickets and more information please visit www.motiongatedubai.com

Joe Kleimanhttp://wwww.themedreality.com
Raised in San Diego on theme parks, zoos, and IMAX films, InPark's Senior Correspondent Joe Kleiman would expand his childhood loves into two decades as a projectionist and theater director within the giant screen industry. In addition to his work in commercial and museum operations, Joe has volunteered his time to animal husbandry at leading facilities in California and Texas and has played a leading management role for a number of performing arts companies. Joe previously served as News Editor and has remained a contributing author to InPark Magazine since 2011. HIs writing has also appeared in Sound & Communications, LF Examiner, Jim Hill Media, The Planetarian, Behind the Thrills, and MiceChat His blog, ThemedReality.com takes an unconventional look at the attractions industry. Follow on twitter @ThemesRenewed Joe lives in Sacramento, California with his wife, dog, and a ghost.
Share
Facebook
Twitter
Linkedin
Email
Print
WhatsApp
Pinterest
ReddIt
Tumblr
Previous articleUniversal Beijing Resort shares new details on themed lands
Next articleIn a virtual format, TEA Thea Awards Digital Case Studies showcase best of human experience