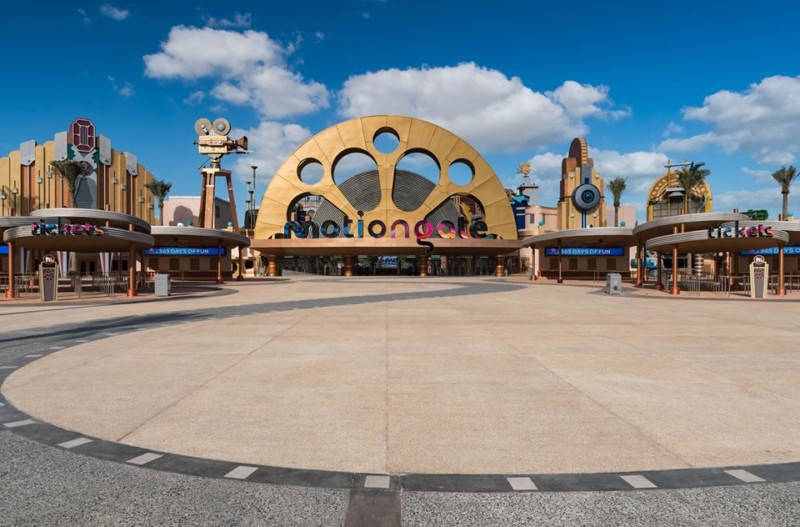 Parques Reunidos expands its international presence with the management of a new park in Dubai – Motiongate. Motiongate, the only park in the world bringing together three of Hollywood’s most top movie studios – DreamWorks Animation, Columbia Pictures and Lionsgate – is part of Dubai Parks & Resorts, the Middle East’s largest multi-themed leisure and entertainment destination in which around 3.422 million Euro has been invested.

Motiongate’s attractions are inspired by 13 of Hollywood´s most memorable live action and animated films such as The Hunger Games, The Smurfs, Kung Fu Panda, Shrek and Ghostbusters. The park is divided up into five thematic areas and offers 27 attractions, 21 of which are indoor, along with 4D motion simulators, more than 15 live shows, 15 shops and 9 themed restaurants.

The opening of Motiongate and Dubai Parks & Resorts was held last weekend and boasted the attendance, among others, of the Prime Minister of the United Arab Emirates, the CEO of DXB Entertainments PJSC, owner of Dubai Parks & Resorts and, on the part of Parques Reunidos, its CEO Fernando Eiroa.

Fernando Eiroa declared that: “One of the main strategies of Parques Reunidos’ business plan is to continue expanding internationally and consolidate itself as one of the most diversified operators in the world. With the opening of Motiongate within the Dubai Parks & Resorts complex we are taking another step into a market which is key for us, the Middle East”.

The opening of Motiongate joins the recent inauguration of Bollywood Parks, also managed by Parques Reunidos. This is the first-of-its-kind theme park that showcases rides and attractions based on some of Bollywood’s biggest blockbusters.

By means of this operation, Parques Reunidos expands its territorial presence in the Middle East and is now present in 62 parks in 14 countries, with around 20 million visitors per year.

Motiongate has five distinct zones, each of which offer a unique cinematic experience:

The Studio Central zone is the park’s entry boulevard that is designed to replicate ‘real’ working movie sets in New York City, and where guests can access services and retail shops to prepare for the day

The DreamWorks zone is entirely indoors and will feature 12 attractions inspired by the popular animated hits How to Train your Dragon, Kung Fu Panda, Madagascar and Shrek

The Lionsgate zone features the world’s first two theme park attractions inspired by the phenomenally successful The Hunger Games franchise along with a 1,000-seater theatre which will host a dance stage show based on Step-Up: All In and Step-Up: Revolution

Joe Kleimanhttp://wwww.themedreality.com
Raised in San Diego on theme parks, zoos, and IMAX films, InPark's Senior Correspondent Joe Kleiman would expand his childhood loves into two decades as a projectionist and theater director within the giant screen industry. In addition to his work in commercial and museum operations, Joe has volunteered his time to animal husbandry at leading facilities in California and Texas and has played a leading management role for a number of performing arts companies. Joe previously served as News Editor and has remained a contributing author to InPark Magazine since 2011. HIs writing has also appeared in Sound & Communications, LF Examiner, Jim Hill Media, The Planetarian, Behind the Thrills, and MiceChat His blog, ThemedReality.com takes an unconventional look at the attractions industry. Follow on twitter @ThemesRenewed Joe lives in Sacramento, California with his wife, dog, and a ghost.
Share
Facebook
Twitter
Linkedin
Email
Print
WhatsApp
Pinterest
ReddIt
Tumblr
Previous articleMonterey Bay Aquarium’s David Rosenberg Elected Second Chair of IAAPA
Next articleSeaWorld San Antonio Expands Partnership With Texas Marine Mammal Stranding Network