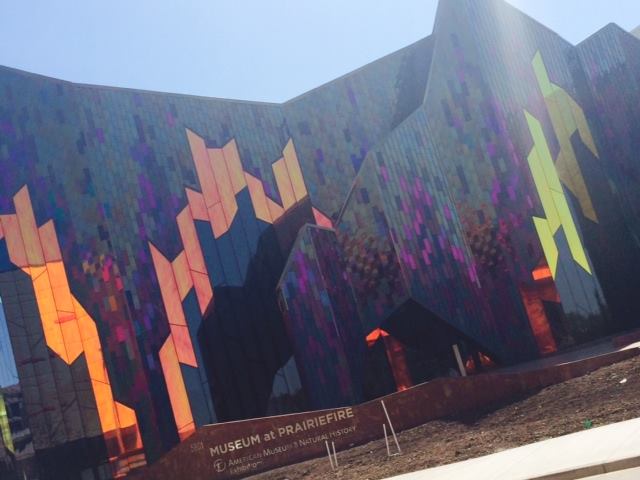 Overland Park, KS, USA (May 12, 2014) — Matt Campbell reports in the Kansas City Star on the Museum at Prairiefire, the institutional anchor to a 60-acre residential/retail/entertainment project in Overland, KS, USA, which opened today.  The museum’s main hall will feature exhibits direct from New York’s American Museum of Natural History:

“The $28 million museum, which opens Monday, is the cultural centerpiece of a 60-acre residential and entertainment district called Prairiefire that is rapidly rising at 135th Street and Nall Avenue. A bowling and bocce bistro and a cutting edge movie theater are also opening.

“The museum emphasizes the sciences and will feature changing exhibits as well as permanent attractions. Although the American Museum of Natural History disseminates content around the world, its relationship with the Museum at Prairiefire is said to be unique in its depth and continuity.

“Developer Fred Merrill Jr. knew he wanted to have some kind of civic component for his planned mixed-use development. Seven years ago he placed a cold call to the American Museum of Natural History and struck a vein.

“’I hit them at a time when they were looking to expand their brand,’ Merrill said. ‘I said why don’t we build a museum at Prairiefire that will have a continuous display and why don’t we sign a long-term contract? They were checking us out and checking the area quite a bit and after a couple of years we came to an agreement. We were definitely trailblazing.’

“The woman he first talked to at the museum, Uli Sailer Das, even agreed to come here to be executive director of the new venue.”

Joe Kleimanhttp://wwww.themedreality.com
Raised in San Diego on theme parks, zoos, and IMAX films, InPark's Senior Correspondent Joe Kleiman would expand his childhood loves into two decades as a projectionist and theater director within the giant screen industry. In addition to his work in commercial and museum operations, Joe has volunteered his time to animal husbandry at leading facilities in California and Texas and has played a leading management role for a number of performing arts companies. Joe previously served as News Editor and has remained a contributing author to InPark Magazine since 2011. HIs writing has also appeared in Sound & Communications, LF Examiner, Jim Hill Media, The Planetarian, Behind the Thrills, and MiceChat His blog, ThemedReality.com takes an unconventional look at the attractions industry. Follow on twitter @ThemesRenewed Joe lives in Sacramento, California with his wife, dog, and a ghost.
Share
Facebook
Twitter
Linkedin
Email
Print
WhatsApp
Pinterest
ReddIt
Tumblr
Previous articleIhu’s Breakaway Falls Dropping Without Warning at Aquatica Orlando
Next articleDiggerland USA Construction Theme Park Announces Opening Date