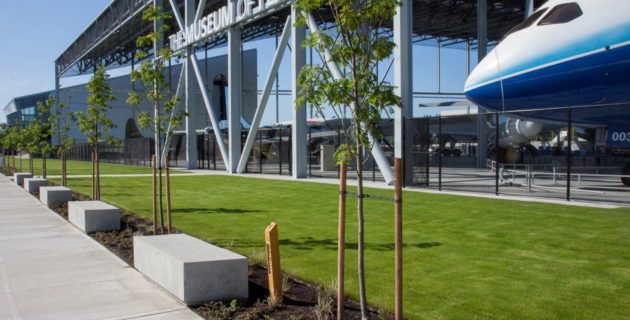 Seattle, WA, USA — The Museum of Flight will open its new, 3-acre Aviation Pavilion on June 25. The 9-story high, roofed outdoor gallery doubles the Museum’s exhibit space with the biggest expansion in its 51-year history, establishing a new Seattle landmark and one of the world’s top displays of historic aircraft.

The Pavilion exhibit focuses on the dramatic development of large aircraft and commercial airliners from the 1930s to the present, and includes planes that cannot be seen anywhere else. The Pavilion also offers a cafe and children’s play area with a mini airport terminal under the wings of the first 747 Jumbo Jet.

The Museum of Flight’s Aviation Pavilion is a covered, outside gallery with 15 rare and unique commercial and military airplanes. The Pavilion also offers the first-ever exhibit about the business of air freight. The FedEx Air Cargo exhibit, housed within a 34 ft. fuselage section of a former FedEx Boeing 727 freighter, is an interactive, behind-the-scenes exploration into the world of air deliveries. The Museum’s Boeing 747 prototype, Boeing 787 Dreamliner and Concorde will be open to the public daily. The building covers more area than two football fields, and is 90 ft. high.

For the first time, the Museum’s unrivaled collection of large commercial aircraft can be seen in one place. The airliner exhibit includes the world’s only presentation of the first Boeing 737 and 747 jets, the extremely rare Douglas DC-2 airliner from the 1930s, the only Concorde on the West Coast, and the new Boeing 787 Dreamliner. The military line-up includes three big bombers-World War Two’s B-17F Flying Fortress and B-29 Superfortress, and the Cold War’s B-47 Stratojet; plus jet fighters spanning the wars from Korea to the Persian Gulf. 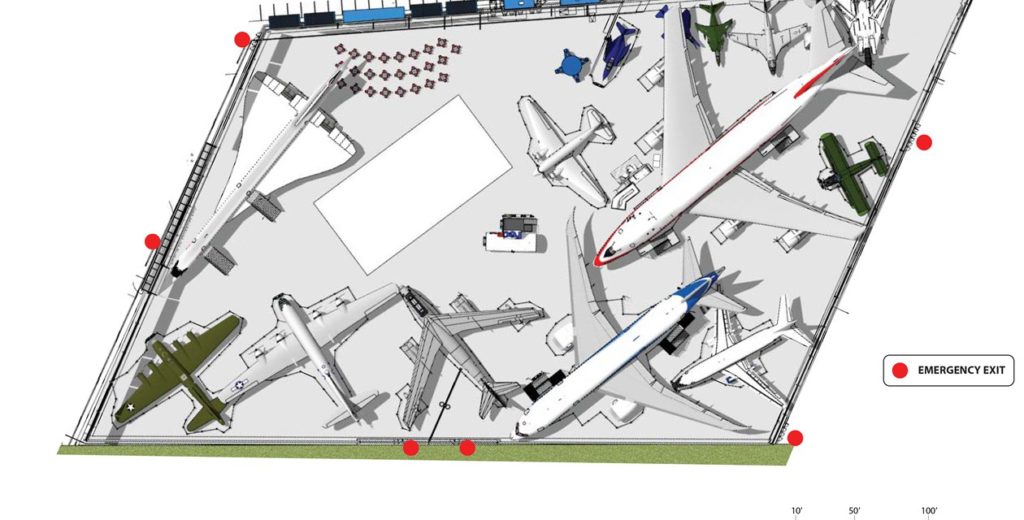 *Aircraft located on the Museum East Campus until September 2016, then relocated to Aviation Pavilion.

Joe Kleimanhttp://wwww.themedreality.com
Raised in San Diego on theme parks, zoos, and IMAX films, Joe Kleiman would expand his childhood loves into two decades as a projectionist and theater director within the giant screen industry. In addition to his work in commercial and museum operations, Joe has volunteered his time to animal husbandry at leading facilities in California and Texas and has played a leading management role for a number of performing arts companies. Joe has been News Editor and contributing author to InPark Magazine since 2011. HIs writing has also appeared in Sound & Communications, LF Examiner, Jim Hill Media, and MiceChat. His blog, ThemedReality.com takes an unconventional look at the attractions industry. Follow on twitter @ThemesRenewed Joe lives in Sacramento, California with his fiancé, two dogs, and a ghost.
Share
Facebook
Twitter
Linkedin
Email
Print
WhatsApp
Pinterest
ReddIt
Tumblr
Previous articleMidsummer Scream Introduces its “Hall of Shadows” Dark Zone
Next articleLeading Indonesian and Chinese Companies Sign Agreement for Indonesia’s First Integrated Themed Park Resort