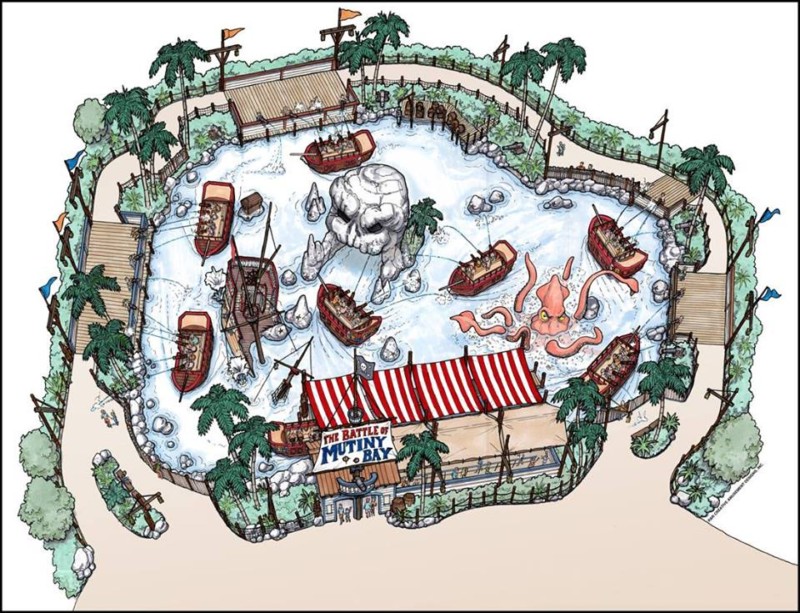 [quote]Whether you’re a landlubber or a salty sea dog you’ll want to be part of the action!”[/quote]

Calverton, NY, USA — Already known for unique rides, Splish Splash Waterpark will debut for the 2014 season, The Battle of Mutiny Bay, This all new interactive water attraction will take you and your fearless crew on a captivating voyage! The passengers inside the boats utilize their water cannons to shoot against the other vehicles and against the people around the circuit. The people around the circuit will have fixed water cannons to shoot against the riders. Man those water cannons and be prepared to defend yourself against roving bands of pirates and pesky sea creatures.

With 96 acres of slides and attractions, Splish Splash truly offers fun for everyone.  After your battle with pirates and seas creatures why not experience the one and only water coaster in New York, Bootlegger’s Run. Bootlegger’s Run will take your four-person raft uphill, just like a theme park coaster, for a series of breathtaking drops, including one from nearly five stories high. Bootlegger’s Run debuted in 2013 and quickly became our guest’s all-time favorite ride. After that thrill packed ride why not catch some sun at the Kahuna Bay wave pool, enjoy one of our VIP rental Cabanas, order lunch and relax a while. After lunch, grab your family and friends and hop on the Mammoth River, see our Tropical Bird Show, brave the Alien Invasion or just float on down the Lazy River.  From the devoted thrill seeker, to the laid back sunbather, to the tiniest of tots, there is something for everyone at Splish Splash.

Joe Kleimanhttp://wwww.themedreality.com
Raised in San Diego on theme parks, zoos, and IMAX films, InPark's Senior Correspondent Joe Kleiman would expand his childhood loves into two decades as a projectionist and theater director within the giant screen industry. In addition to his work in commercial and museum operations, Joe has volunteered his time to animal husbandry at leading facilities in California and Texas and has played a leading management role for a number of performing arts companies. Joe previously served as News Editor and has remained a contributing author to InPark Magazine since 2011. HIs writing has also appeared in Sound & Communications, LF Examiner, Jim Hill Media, The Planetarian, Behind the Thrills, and MiceChat His blog, ThemedReality.com takes an unconventional look at the attractions industry. Follow on twitter @ThemesRenewed Joe lives in Sacramento, California with his wife, dog, and a ghost.
Share
Facebook
Twitter
Linkedin
Email
Print
WhatsApp
Pinterest
ReddIt
Tumblr
Previous articleQube Cinema Showcasing KeySmith.biz Website at NAB
Next articleWin Free Pass to Jackson Hole Science Media Symposium