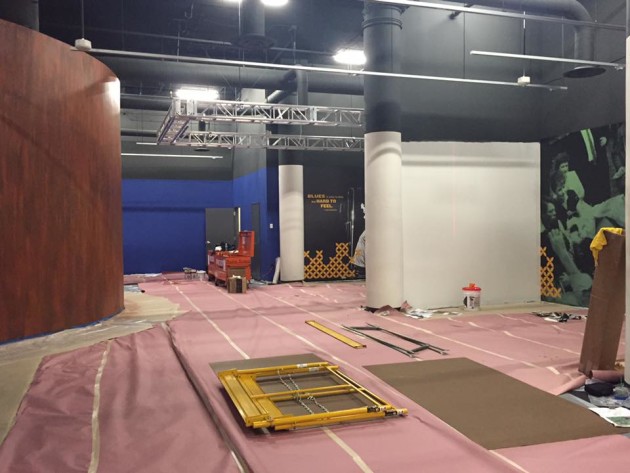 St. Louis, MO, USA (December 17, 2015) — The National Blues Museum announced today that it has received a $40,000 grant from American Express to help with interior and exterior restoration of its 6th and Washington Avenue location in the Mercantile Exchange (MX) District.

As part of its Honor the Past-Build for the Future of the Blues campaign, the museum secured funding from both private and public supporters to help restore and renovate the 23,000 square foot facility. The museum houses artifact-driven exhibits and highly-interactive galleries, in addition to performance, classroom and special event spaces. “By awarding this grant to the museum, American Express demonstrates they understand the importance of historic preservation – not only for the building, but for the deep historic roots that Blues music holds in all American music,” said Dion Brown, the museum’s Executive Director.

Scheduled to open to the public on April 2, 2016, the museum will lead visitors through various Blues styles and trace its history and American music influence from the Mississippi Delta through St. Louis to Chicago, and its ultimate expansion across the U.S. and internationally. “We are expecting students and guests from all over the globe,” says Brown. “We want them to be inspired by not only what they learn, but by the feel of the physical space.”

“We are grateful to American Express and its support of The National Blues Museum”, said Rob Endicott, Chairman of the Board of Directors, and partner at the international law firm, Bryan Cave LLP. “Corporate partners who invest in the local community are vital to organizations like the museum. Through this grant, we were able to honor our commitment to the community by maintaining the historical integrity of the building.”

Joe Kleimanhttp://wwww.themedreality.com
Raised in San Diego on theme parks, zoos, and IMAX films, InPark's Senior Correspondent Joe Kleiman would expand his childhood loves into two decades as a projectionist and theater director within the giant screen industry. In addition to his work in commercial and museum operations, Joe has volunteered his time to animal husbandry at leading facilities in California and Texas and has played a leading management role for a number of performing arts companies. Joe previously served as News Editor and has remained a contributing author to InPark Magazine since 2011. HIs writing has also appeared in Sound & Communications, LF Examiner, Jim Hill Media, The Planetarian, Behind the Thrills, and MiceChat His blog, ThemedReality.com takes an unconventional look at the attractions industry. Follow on twitter @ThemesRenewed Joe lives in Sacramento, California with his wife, dog, and a ghost.
Share
Facebook
Twitter
Linkedin
Email
Print
WhatsApp
Pinterest
ReddIt
Tumblr
Previous article
National Cowgirl Museum and Hall of Fame Saddles Up with Electrosonic on Overhaul
Next article
TDC Brings Projection Mapping to Two Sydney Landmarks for the Holidays