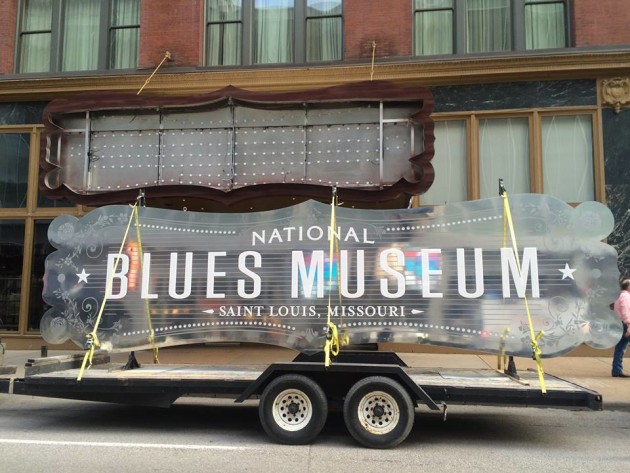 St. Louis, MO, USA — The National Blues Museum is pleased to announce the lineup of festivities in honor of its Grand Opening Day, taking place on Saturday, April 2.

Sixth and seventh streets between Washington Avenue will be blocked off between 9:00 a.m. and 10:10 a.m. in order to allow for visitors and museum supporters to have space to enjoy the outdoor festivities. The day will begin with a musical procession from the Normandy High School marching band at 9:30 a.m. The band will start marching at the corner of Sixth and Washington Avenue and lead a procession to the front door of the museum.

The procession will be followed by remarks from Chairman of the Board Rob Endicott, Executive Director Dion Brown, and Mayor Francis Slay. After the ribbon cutting, the museum will officially open its doors to the public at 10:00 a.m.

“It has been such a pleasure to see the museum undergo so many phases of growth and development, and to finally arrive at the opening day,” says chairman of the board Rob Endicott. “We greatly appreciate all of the support that has been provided by the City of St. Louis and the State of Missouri, our donors and the general public. We couldn’t be more pleased to share it with the world.”

Once the doors open, there will be an all-day rotation of live entertainment inside the Lumière Place Legends Room until 4:00 p.m. Blues rock band Phi will kick off the day, followed by performances from blues musicians David Dee, Jeremiah Johnson, Marquise Knox, Jim McClaren, Mickey Rogers, and Renee Smith. Rogers, a singer-guitarist, and McClaren, a harmonicist, are both featured within the museum. The concerts will be emceed by Big Llou, host of Sirius XM’s Bluesville channel.

Visitors can also tour artist H.C. Porter’s “Blues @ Home: Mississippi’s Living Blues Legends” exhibition, which will be on view in the Scott and Diane McCuaig and Family Gallery. Porter created 31 paintings of Mississippi-based blues artists and has paired them with oral histories from each subject. The exhibition includes images of world-famous performers, including the late David “Honeyboy” Edwards,the late B.B. King, and Bobby Rush.

“This is a landmark day that will be packed with education and entertainment, and we can’t wait to let visitors explore everything the museum has to offer,” says Executive Director Dion Brown. “This is a place that will enrich the history and culture of not just blues music, but also the city of St. Louis, and we are glad to be a part of the area.”

The museum will charge regular admission, and will remain open until 5 p.m. Information on parking, transportation, lodging, and food can be found on the National Blues Museum’s website at nationalbluesmuseum.org/news/grand-opening-weekend/.

Joe Kleimanhttp://wwww.themedreality.com
Raised in San Diego on theme parks, zoos, and IMAX films, Joe Kleiman would expand his childhood loves into two decades as a projectionist and theater director within the giant screen industry. In addition to his work in commercial and museum operations, Joe has volunteered his time to animal husbandry at leading facilities in California and Texas and has played a leading management role for a number of performing arts companies. Joe has been News Editor and contributing author to InPark Magazine since 2011. HIs writing has also appeared in Sound & Communications, LF Examiner, Jim Hill Media, and MiceChat. His blog, ThemedReality.com takes an unconventional look at the attractions industry. Follow on twitter @ThemesRenewed Joe lives in Sacramento, California with his fiancé, two dogs, and a ghost.
Share
Facebook
Twitter
Linkedin
Email
Print
WhatsApp
Pinterest
ReddIt
Tumblr
Previous articleMichigan’s Adventure Honors its Past By Bringing Baaack a Treasured Family Attraction
Next articleElectrosonic Engineers and Installs New Appeasement Exhibit for The Museum of Tolerance in Los Angeles