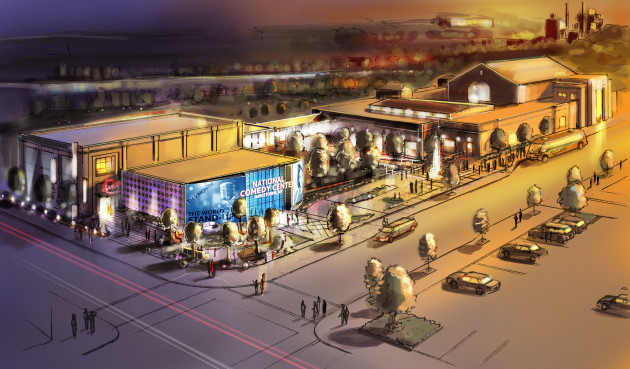 Albany, NY, USA — Governor Andrew M. Cuomo has announced that the new National Comedy Center in Jamestown, New York has officially broken ground. The $45 million center celebrates the history of comedy, the craft, and its contributors. To celebrate the start of construction, more than 40 events on groundbreaking weekend (July 30 – August 1) included comedy greats such as Jerry Seinfeld, Melissa Rivers, Regis Philbin, Nick Offerman, Kelly Carlin, the family of Harold Ramis, and many others.

“New York is proud to be home to many legends in entertainment, and building the new National Comedy Center in the hometown of Lucille Ball is a great honor that will bring both visitors and economic growth,” Governor Cuomo said. “This administration and the Regional Economic Development Council is committed to moving Western New York forward, and we’re proud to help fund and host this incredible new attraction.” ‎

The National Comedy Center project includes the renovation of two historic buildings as well as the construction of a new building. It is expected to attract over 114,000 visitors each year and give a $23 million boost to the local economy annually, while also sparking further economic development and helping to improve the economic environment in the region. The National Comedy Center is anticipated to generate 218 jobs and $6.5 million in wages per year in the three counties of Chautauqua, Cattaraugus, & Erie.

Project Chairman Tom Benson said, “By virtue of receiving funding from New York State, the National Comedy Center has been formally adopted as part of the State’s long-term, state-wide tourism strategy and we are looking forward to creating a place of laughter and learning for generations to come.”

Journey Gunderson, Executive Director, said, “It’s great to partner with New York State on this project. Jamestown already brings visitors from 37 states to its annual Lucille Ball Comedy Festival and with Governor Cuomo’s support we are moving forward with the creation of a national visitor experience in comedy that is sure to receive worldwide attention.”

In December 2014, Governor Cuomo awarded the National Comedy Center project an Economic Development Grant of $1,500,000. With this award, the project became a key part of the long term economic development and tourism strategy for New York State which will allow it to play a partnership role in regional, statewide and national marketing campaigns such as the revitalized I Love NY Program.

Howard Zemsky, President and CEO of Empire State Development said, “The National Comedy Center deserves a standing ovation for showcasing the region, by placing Jamestown on a worldwide stage, and instilling a sense of pride in all of us who love Lucy.”

“NYS Tourism experts and leaders in the comedy industry and are partnering with the nonprofit National Comedy Center, Inc. to place Jamestown on the worldwide stage, and see the National Comedy Center through to reality. This project deserves a standing ovation for boosting the appeal of the region for visitors and instilling a sense of pride in the residents, who will always love their Lucy.” 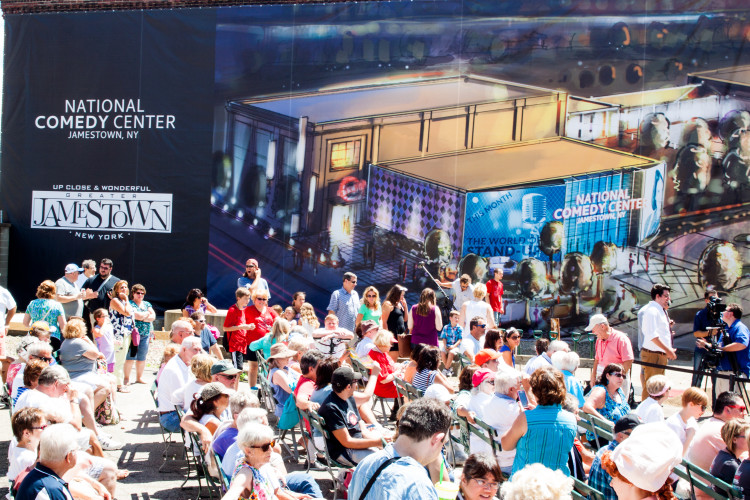 Lucie Arnaz said, ““Desi and I are thrilled for and very happy that this is actually coming to fruition so spectacularly. We know that Mom would be completely gobsmacked at the scope of what her Jamestown was doing. And I am sure that she would be especially grateful that her life and career could have been an inspiration for this, the first ever National Comedy Center becoming a reality. It represents everything she wanted and exactly what she hoped would happen.”

Construction will begin in the spring of 2016. Fabrication and installation of the attraction components along with the content acquisition process will follow and a target opening in late spring 2017 has been established.

The 501(c)(3) non-profit National Comedy Center is designed by renowned creative firm Jack Rouse Associates and interactive specialist Local Projects to honor the craft and its legendary contributors with its interactive exhibit experience, celebrate the best of contemporary comedy with its programming, and cultivate the comedic arts with professional development and support for artists. The National Comedy Center represents the expansion of the National Comedy Center, Inc. and fulfills its mission to enrich the world through the healing power of laughter with its commitment to the celebration of the comedic arts.

The National Comedy Center will include:

Senator Charles E. Schumer said, “Jamestown has a very rich comedy tradition. It’s only fitting that the birthplace of Lucille Ball becomes a destination for comedy lovers across America. I can’t wait to see this new facility and the energy that it will bring to Chautauqua County. If this year’s current program is any indication, the rich tradition started by Lucy and Desi will flourish in Jamestown for decades to come.”

Congressman Tom Reed said, “I care about the future of this region and because of that, I continue to fight for this project. I visited the site earlier today and am very excited about the impact this will have on Jamestown and our region. It’s expected to bring roughly 200 jobs to the community both directly and indirectly. It’s only fair that we give the people of our region every opportunity succeed and this is another reminder that Jamestown and the Southern Tier are coming back.”

Senator Catharine Young said, “Lucille Ball and Desi Arnaz are already beloved figures around the world. The new National Comedy Center will take that legacy to new heights, celebrating the accomplishments of all those who bring joy and laughter to people as an art. Visitors will pump new life into our region’s economy and this attraction will expand recreational venues for our residents. It’s one of the most exciting projects ever tackled in the Southern Tier.”

Assemblyman Andy Goodell said, “Jamestown takes comedy seriously. We appreciate Governor Cuomo’s support for this important smart growth project that will contribute to the economic revitalization of the region.”

Chautauqua County Executive Vince Horrigan said, “The National Comedy Center is a game changer for Chautauqua County and the Western NY Region. Clearly a National level attraction this wonderful project will bring young and old from far and wide to laugh and enjoy all that our region offers. We are so thankful to our NY State and area Foundation partners who are making this a dream come true. “

Jamestown Mayor Sam Teresi said,” I am thrilled that after years of planning and fund raising efforts, this significant new development opportunity for New York’s Pearl City of Jamestown and the entire Western Region has finally reached the point of implementation. Clearly, this unique and major addition to the economy of Southwestern New York is the product of ongoing cooperation and collaboration on numerous fronts, including; the tenacity of the Board of Directors and staff of the National Comedy Center, the generosity of the Gebbie Foundation of Jamestown and Oishei Foundation of Buffalo, the dedicated efforts of the City of Jamestown staff and last but certainly not least, the vision of Governor Cuomo and financial assistance of Empire State Development. As Mayor of this great City, it is my pleasure and honor to thank and congratulate this entire team that has invested the necessary resources, made the sacrifices and undertaken all of the hard work to make this project possible. Now, I’m looking forward to and truly can’t wait for ‘Opening Night’! “

Joe Kleimanhttp://wwww.themedreality.com
Raised in San Diego on theme parks, zoos, and IMAX films, InPark's Senior Correspondent Joe Kleiman would expand his childhood loves into two decades as a projectionist and theater director within the giant screen industry. In addition to his work in commercial and museum operations, Joe has volunteered his time to animal husbandry at leading facilities in California and Texas and has played a leading management role for a number of performing arts companies. Joe previously served as News Editor and has remained a contributing author to InPark Magazine since 2011. HIs writing has also appeared in Sound & Communications, LF Examiner, Jim Hill Media, The Planetarian, Behind the Thrills, and MiceChat His blog, ThemedReality.com takes an unconventional look at the attractions industry. Follow on twitter @ThemesRenewed Joe lives in Sacramento, California with his wife, dog, and a ghost.
Share
Facebook
Twitter
Linkedin
Email
Print
WhatsApp
Pinterest
ReddIt
Tumblr
Previous articleOrlando Visitors Will Soon Be Able to Waste Away at 300 Acre Margaritaville Resort
Next articlePicsolve Acquires Maxifoto and its Portfolio of Attractions Including Efteling

Pittsburgh’s Moonshot Museum opens, promoting the future of the space industry to guests