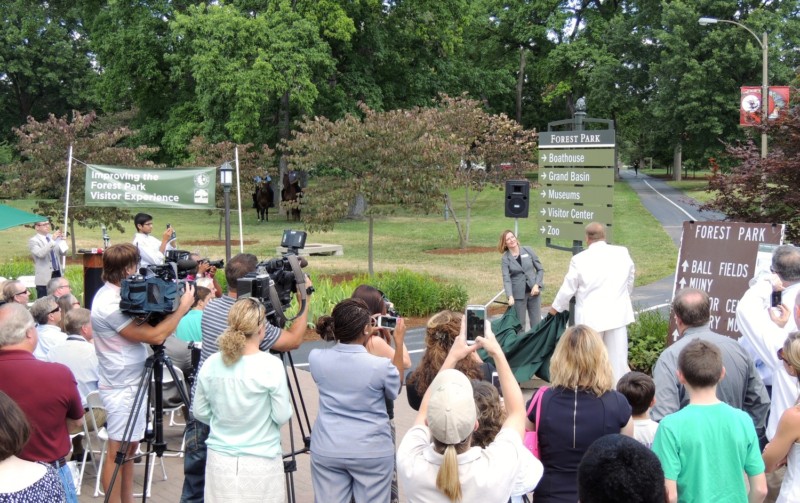 St. Louis, MO, USA — Forest Park Forever and the City of St. Louis announced that the City has begun installing an intuitive and visitor-friendly Park-wide way-finding system, consisting of 239 new directional signs, Park maps, informational kiosks and banners that will greatly assist the Park’s 13 million annual visitors in successfully navigating the Park. The organization and City also announced that the first phase of improvements to Forest Park’s restrooms and drinking fountains will begin this fall, starting with the restroom near the Park’s highly trafficked Hampton entrance.

The announcements were made at an event in Forest Park, with remarks City Parks Director Gary Bess, Board of Public Service President Richard T. Bradley, Josh Wiese from the Mayor’s Office, Forest Park Forever Board Chair Steve Finerty, Forest Park Forever President & Executive Director Lesley S. Hoffarth, P.E.and Rick Ausick, Brown Shoe Company Division President for Famous Footwear. The community gathering, which included project donors, leaders from a range of Park institutions, Forest Park Forever Board members, local officials and members of the public, was capped off by an unveiling of one of the new signs, viewings of additional renderings and a community lunch of local food truck fare and ice cream.

“This is an exciting announcement for St. Louis, Forest Park and the Park’s users and visitors,” said Mayor Francis G. Slay. “These two comprehensive projects will enhance the Forest Park experience for millions of visitors — every day of the year.”

“Forest Park’s transformation in recent decades has been remarkable,” said Gary Bess, City Parks Director.“But there are still areas where critical upgrades are needed. Better signage and restrooms have been at the top of the visitor wish list for years. We’re thrilled to be moving forward with these projects.”

“Together, these projects will dramatically improve the experience of millions of visitors,” said Lesley S. Hoffarth, Forest Park Forever President & Executive Director. “The top two requests we receive from visitors are to help them better navigate Forest Park and to improve our drinking fountains and restroom facilities. Forest Park Forever is grateful to our donors and partners — particularly the City — for making these initiatives possible.”

It is estimated that a quarter of Forest Park’s 13 million annual visitors are not from the St. Louis area. Even for those who are, the Park’s existing brown navigational signs — intended to be temporary when they were installed years ago — can appear confusing or incomplete to visitors. 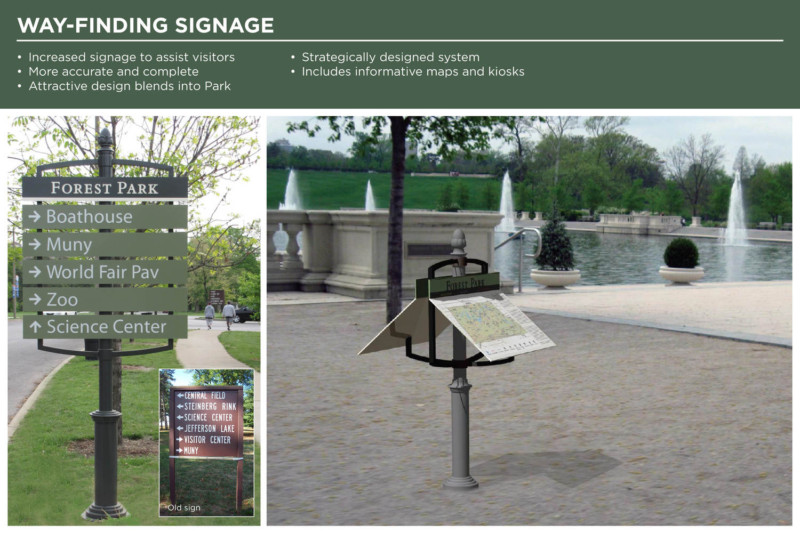 After the initial design stage was complete, Forest Park Forever led the project and raised private funds for further design as well as construction and installation. When installed by the City this summer, the Park’s resulting new permanent way-finding system will greatly assist walkers, runners, cyclists and drivers in finding their way through the Park. The signage system has many important features, including:

The way-finding project has been designed by a team led by Corbin Design. A team led by ASI Signage Innovations — including Edwards-Kamadulski (MBE), Tramar Contracting (WBE) and J.P. Collier (WBE) — is managing fabrication, construction and installation.

Installation of the Park’s new way-finding system — Forest Park’s most comprehensive Park-wide project since the completion of the recreational Dual Path in 2011 — will be complete by fall 2014.