The project is expected to be completed by September 2014, according to Eng. Mohammed Nour Mashroum, the Director of General Projects Department, who disclosed the details of the proposed project on the occasion of celebrating the 1000th meeting of the technical committee of Dubai Municipality. The meeting was held at DM’s Main Building in Deira, Dubai.

The theme park located in Al Khawaneej has been specially designed from an Islamic perspective to introduce the miracles of Quran through a variety of surprises for the visitors, DM said in a press release..

The 60-hectare park will have all available plants mentioned in the holy Quran along with facilities such as an attractive main entrance, an administration building, an Islamic garden, children’s play areas, Umrah corner, an outdoor theatre, areas for showing the miracles of the Quran, fountains, bathrooms, a glass building, a desert garden, a palm oasis, a lake, a running track, a cycling track and a sandy walking track.
The plants mentioned in the Holy Quran are 54 and include fig, pomegranate, olive, corn, leek, garlic, onion, lentil, barley, wheat, ginger, pumpkin, watermelon, tamarind, seders, vineyards, bananas, cucumbers and basil.

“The glass building will accommodate of 15 items of plants, and other items will be planted in different specific gardens. These plants are expected to stimulate the visitors to think about the reason behind mentioning the names of these plans in the Quran,” Mashroum said.

The area allocated for “the miracles of Quran” will include an air-conditioned tunnel to show miracles and stories of the Quran, he explained. 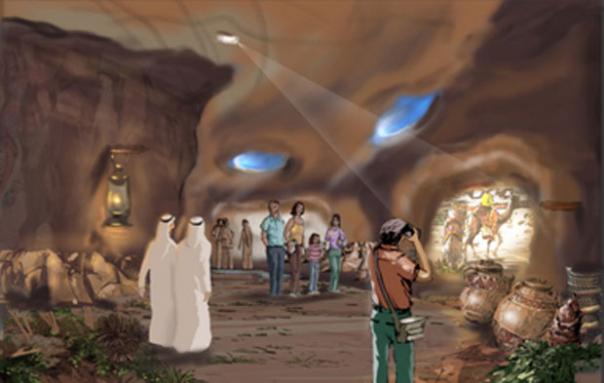 The total cost of the project is estimated at around Dh27 million as per the current tenders, and may be slightly varied as per the final design approved by the technical committee.

He noted that the initial site preparation works, tracks and service buildings have been completed. The second phase of the project will start in July 2013 and to end in July 2014 and third stage will start in august 2014 to end in September 2014.

Joe Kleimanhttp://wwww.themedreality.com
Raised in San Diego on theme parks, zoos, and IMAX films, InPark's Senior Correspondent Joe Kleiman would expand his childhood loves into two decades as a projectionist and theater director within the giant screen industry. In addition to his work in commercial and museum operations, Joe has volunteered his time to animal husbandry at leading facilities in California and Texas and has played a leading management role for a number of performing arts companies. Joe previously served as News Editor and has remained a contributing author to InPark Magazine since 2011. HIs writing has also appeared in Sound & Communications, LF Examiner, Jim Hill Media, The Planetarian, Behind the Thrills, and MiceChat His blog, ThemedReality.com takes an unconventional look at the attractions industry. Follow on twitter @ThemesRenewed Joe lives in Sacramento, California with his wife, dog, and a ghost.
Share
Facebook
Twitter
Linkedin
Email
Print
WhatsApp
Pinterest
ReddIt
Tumblr
Previous article
Enchanted Tiki Room, The Birthplace of Audio-Animatronics, Turns Fifty
Next article
Launching in Four Days….