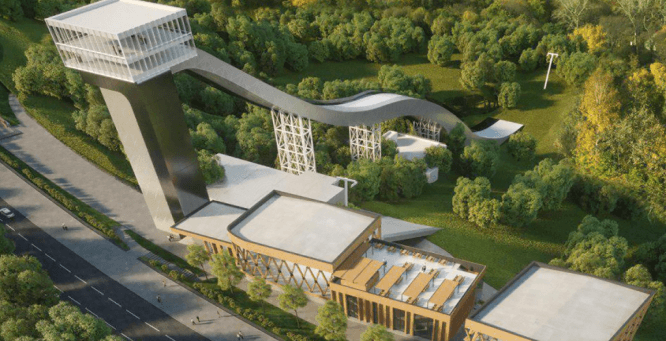 The new cable car, that will make three stops, will glide 140 meters above the Moskva River. The panoramic location on Sparrow Hills will eventually become the site of an important sports area, dedicated to international events. By the end of 2018, the old ski jumping ramp dating from 1953 will have been restored and reopened. In addition to the usual passengers, the cable car will also carry amateur and professional athletes heading for the ski slopes or the ramp in winter, and, all year round, to the sporting events at the Luzhniki Stadium. The system will also constitute a tourist attraction, thanks to the views from the panoramic cable cars.

The headquarters of NIS in Montebello Vicentino, a center of world excellence in the development of cutting edge systems for cableways, in conjunction with Bartholet Maschinenbau AG (BMF), leader in the mechanical lifting systems sector, has designed the electronic equipment that complies with European directives for the automation and safety of transport passenger systems. More specifically, NIS has provided the drives, motors, communication systems and wiring, support during the start up stage and the training of local operators, that is required in order to ensure that the entire facility operates flawlessly. The technology used makes this cableway system totally unique. In fact, while the cable cars travel the system’s entire route, the seats take a shorter run over the hill, thanks to a speedy exchange method. This cable car system is the third of its kind produced by the two companies in Russia.

“Strengthened by our experience in the design and development of industrial control and automation systems for cable transport, that dates back more than 40 years, our team of engineers, based in North Italy, have devised a customized system capable of enhancing the territory both by facilitating transport and offering tourists an unforgettable experience, by using a turnkey technological solution that is safe, dependable and long-lasting”  commented Kaila Haines, Marketing & PR Director for Nidec Industrial Solutions. “We are particularly proud of this project, that we have developed and put together in conjunction with local institutions and BMF. It will benefit the entire population, visitors and the development of the local economy and culture.”

The 737-meter cable car system has thirty-five, eight-seater cable cars and will handle 1600 passengers an hour. It also has VIP Deluxe cars. Nidec ASI’s cutting edge technology and the four main drives installed, will provide variable power of between 120 and 150 kw, producing a cruising speed of 3 meters per second. The system consists of two different sections – the first overflies the Moskva River whilst the second travels to the top of the hill – with an intermediate interchange that makes the ascent and descent of the passengers possible. It will be possible to make a stop, along the route, before crossing the river and arriving at the stadium. The flow will be coordinated and managed by the control room located at the top of the futuristic Luzhniki station.

Joe Kleimanhttp://wwww.themedreality.com
Raised in San Diego on theme parks, zoos, and IMAX films, InPark's Senior Correspondent Joe Kleiman would expand his childhood loves into two decades as a projectionist and theater director within the giant screen industry. In addition to his work in commercial and museum operations, Joe has volunteered his time to animal husbandry at leading facilities in California and Texas and has played a leading management role for a number of performing arts companies. Joe previously served as News Editor and has remained a contributing author to InPark Magazine since 2011. HIs writing has also appeared in Sound & Communications, LF Examiner, Jim Hill Media, The Planetarian, Behind the Thrills, and MiceChat His blog, ThemedReality.com takes an unconventional look at the attractions industry. Follow on twitter @ThemesRenewed Joe lives in Sacramento, California with his wife, dog, and a ghost.
Share
Facebook
Twitter
Linkedin
Email
Print
WhatsApp
Pinterest
ReddIt
Tumblr
Previous articleInfinity Falls at SeaWorld Orlando marks milestone as highest point of ride is completed
Next articleComcast drops offer for Fox