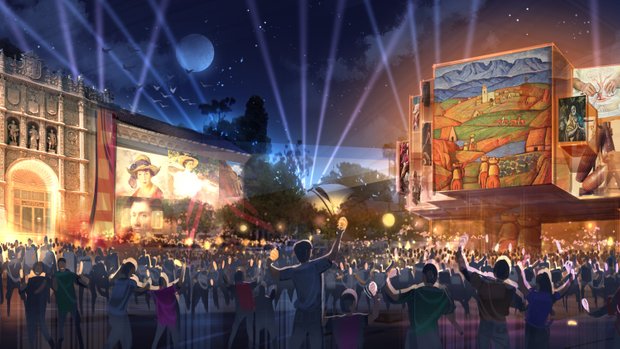 San Diego, CA, USA — Jeff McDonald reports in the San Diego Union-Tribune on the nonprofit given $2.8 million to plan a commemoration of the 1915 Panama-Pacific Exposition but showing little progress.  Themed entertainment design firms associated with the project include BRC Imagination Arts and Utopia Entertainment:

“For reasons too varied and complex to enumerate, sponsorships have not materialized and, after discussions with and mutual agreement by the City of San Diego, at its meeting this morning the BPCI board of directors voted to return to the City, authority for organizing the 2015 Centennial Celebration in Balboa Park,” board member Patricia McQuarter announced Tuesday afternoon. ‘It is anticipated that the transition process will take place over the next 30 days and BPCI (the corporation) will be dissolved at the end of its fiscal year on July 31,2014.’

“In her email, McQuarter promised transparency as the organization winds to a close.

“No one from Balboa Park Celebration returned messages Tuesday, so it was not clear beyond the McQuarter statement what specifically led to the decision.

“Mayor Kevin Faulconer released a statement saying the city plans ‘to move forward with a more practical and realistic celebration that recognizes the character and history of Balboa Park. This new celebration would focus on the existing cultural institutions within the park.’

“Balboa Park Celebration was granted unprecedented control over Balboa Park to pull off the centennial party, envisioned as a yearlong series of events with a budget of $50 million or more that was supposed to attract millions of tourists — and their money — to the city.”

Joe Kleimanhttp://wwww.themedreality.com
Raised in San Diego on theme parks, zoos, and IMAX films, InPark's Senior Correspondent Joe Kleiman would expand his childhood loves into two decades as a projectionist and theater director within the giant screen industry. In addition to his work in commercial and museum operations, Joe has volunteered his time to animal husbandry at leading facilities in California and Texas and has played a leading management role for a number of performing arts companies. Joe previously served as News Editor and has remained a contributing author to InPark Magazine since 2011. HIs writing has also appeared in Sound & Communications, LF Examiner, Jim Hill Media, The Planetarian, Behind the Thrills, and MiceChat His blog, ThemedReality.com takes an unconventional look at the attractions industry. Follow on twitter @ThemesRenewed Joe lives in Sacramento, California with his wife, dog, and a ghost.
Share
Facebook
Twitter
Linkedin
Email
Print
WhatsApp
Pinterest
ReddIt
Tumblr
Previous article
Shedd Aquarium Welcomes Newest Rescue Dog as Aquarium Amabassador
Next article
Ferrari Expands Theme Park Portfolio at PortAventura Resort in Spain