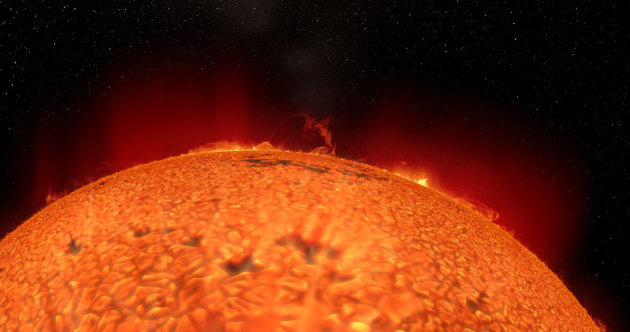 [quote]We expect to reach millions of viewers worldwide over the life of these films.” — Mike Bruno[/quote]

Urbana, IL, USA – The National Science Foundation (NSF) has awarded $1.5 million to an NCSA-led project that will develop and widely distribute a series of science documentaries highlighting visualizations of computational and digitally-enabled science. The project assembles a creative team of producers, technologists, artists, and educators who will collaborate with scientists and researchers across the country to raise public awareness about the Centrality of Advanced Digitally ENabled Science (CADENS).

The CADENS project is led by Donna Cox, director of the Advanced Visualization Lab (AVL) at the National Center for Supercomputing Applications (NCSA) and professor in Art and Design at the University of Illinois at Urbana-Champaign. AVL has created cinematic data visualizations seen by millions of people at museums, planetariums, and IMAX theaters.

“The ability to generate and analyze giant data sets has produced a paradigm shift across all fields of inquiry. Compelling visualizations of these data will connect with broad audiences and provide insight into a wide range of natural phenomena,” says Cox.

“We’re excited to support Donna Cox and her team at NCSA in this ambitious effort,” said Rudolf Eigenmann, a program director in the advanced cyber-infrastructure division at NSF who oversees the award. “Our hope is that through visualization and visual storytelling, the project will help educate the public about what computational science is and how it impacts our lives.”

The project team includes veteran science producer/writer Thomas Lucas; fulldome show producer/distributor Mike Bruno, the creative media director of Spitz; and the leaders of the NSF-supported Blue Waters and XSEDE projects, which enable thousands of people across the country to carry out computational and data-driven research.

CADENS will produce three ultra-high-resolution digital documentaries that will premiere at giant screen fulldome theaters and will be scaled for wide distribution to smaller theaters found at a growing number of museums, planetariums, science centers, and academic institutions.

The first fulldome documentary, “Solar Superstorms,” will focus on the sun’s effects on earth’s atmospheric, communications, and power systems and will include supporting educational materials.

The CADENS team also will produce nine high-definition documentary programs covering a wide range of science subjects. These shows will be distributed online via YouTube, Hulu, and other outlets.

Through a call for participation, the team will cast a wide net to find new research collaborators. “We anticipate topics ranging from census analyses to pandemic modeling, earthquakes, lifecycles of stars, severe weather, and deep mysteries inside our planet,” said Lucas. “We hope to open people’s eyes to whole new ways of seeing the world, and to show the passion of scientists on the verge of profound discoveries.”

Joe Kleimanhttp://wwww.themedreality.com
Raised in San Diego on theme parks, zoos, and IMAX films, Joe Kleiman would expand his childhood loves into two decades as a projectionist and theater director within the giant screen industry. In addition to his work in commercial and museum operations, Joe has volunteered his time to animal husbandry at leading facilities in California and Texas and has played a leading management role for a number of performing arts companies. Joe has been News Editor and contributing author to InPark Magazine since 2011. HIs writing has also appeared in Sound & Communications, LF Examiner, Jim Hill Media, and MiceChat. His blog, ThemedReality.com takes an unconventional look at the attractions industry. Follow on twitter @ThemesRenewed Joe lives in Sacramento, California with his fiancé, two dogs, and a ghost.
Share
Facebook
Twitter
Linkedin
Email
Print
WhatsApp
Pinterest
ReddIt
Tumblr
Previous articleWhiteWater Awarded IAAPA Best New Product Brass Ring Award for AquaPlay RainFortress at Columbus Zoo
Next articleAO&A and Mousetrappe Partner with Sydney’s Taronga Zoo to Create Iconic Multimedia Experience