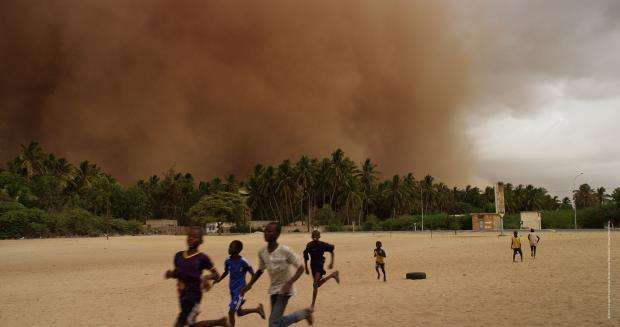 Opening at the California Science Center on October 11, 2017, Hurricane 3D introduces audiences to the strength of the Atlantic hurricane, one of the most powerful forces on the planet. In this season of recent devastating hurricanes, including Harvey, Irma, Maria and others, Hurricane 3D gives insight into the science behind this phenomena, as well as a sense of the visceral impact experienced by those affected. Learn how hurricanes are monitored to keep people safe, and the ways rescue teams mobilize to help. Discover that, although hurricanes are shatteringly destructive, they play a surprisingly beneficial role in revitalizing earth’s ecosystems.

Filmmakers teamed up with NASA to follow the footsteps of a hurricane, which begins its journey as a sandstorm in Senegal, heads west across the Atlantic, building momentum, then blows into the jungles of the Caribbean. With winds up to 124 mph, impacting 12 countries in its path, the hurricane is the film’s main character. The supporting cast consists of the men, women, plants and animals that it encounters on its journey.

As Hurricane 3D explores the chaos and disruption of homes and lives, it reveals the amazing stories of emergency management teams and first responders, who bring hope to those living in the path of the hurricane, and the strength of new purpose in their recovery efforts. With visions of resilient nature and rainforests revitalized by the storm, Hurricane 3D captures a timeless cycle of destruction and renewal.

“Hurricane 3D offers the closest approximation to experiencing a hurricane, while remaining safe,” notes California Science Center President Jeff Rudolph. “We hope that audiences in California can gain insight from this, and empathize with the victims of hurricanes across the world.”

From opening day, October 11, until October 31, the California Science Center and nWave Pictures Distribution will donate a dollar from each ticket sale for Hurricane 3D to the ‘One America Appeal,’ to help hurricane victims.

Hurricane 3D is one of two new films to open the California Science Center’s new IMAX with Laser system, a next-generation, cutting-edge technology theater experience. With the new system, guests will discover the future of cinema with crystal clear light, sights and sounds.  A 12-channel surround sound system, delivering the extraordinary audio of the film, will debut simultaneously, engaging viewers through multi-sensory immersion. Hurricane 3D also illustrates the incredible audio capabilities of the IMAX with Laser system. Audiences will almost be able to feel the strength of the wind through the new IMAX sound system, helping to further the California Science Center mission of stimulating curiosity and inspiring science learning in visitors of all ages.

“We are delighted to bring Hurricane 3D to the newly upgraded IMAX Laser Theater at the California Science Center,” added Janine Baker, SVP of nWave Pictures Distribution. “This giant-screen film perfectly captures the sound and fury of nature, as we fly through the eye of the storm on-board one of NOAA’s hurricane-hunter planes; watch the growing threat as seen from the International Space Station high above earth; and dive below the surface of the ocean to witness the impact of the storm surge on coral reefs and surrounding coastal areas.”

The film was shot over 280 days, in 12 countries, and took five years to produce. Hurricane 3D is an nWave Pictures Distribution release of an Ouragan Films production. The film is produced by Jacqueline Farmer, directed by Cyril Barbançon, Andy Byatt & Jacqueline Farmer, and features music by Yann Tiersen.

Joe Kleimanhttp://wwww.themedreality.com
Raised in San Diego on theme parks, zoos, and IMAX films, InPark's Senior Correspondent Joe Kleiman would expand his childhood loves into two decades as a projectionist and theater director within the giant screen industry. In addition to his work in commercial and museum operations, Joe has volunteered his time to animal husbandry at leading facilities in California and Texas and has played a leading management role for a number of performing arts companies. Joe previously served as News Editor and has remained a contributing author to InPark Magazine since 2011. HIs writing has also appeared in Sound & Communications, LF Examiner, Jim Hill Media, The Planetarian, Behind the Thrills, and MiceChat His blog, ThemedReality.com takes an unconventional look at the attractions industry. Follow on twitter @ThemesRenewed Joe lives in Sacramento, California with his wife, dog, and a ghost.
Share
Facebook
Twitter
Linkedin
Email
Print
WhatsApp
Pinterest
ReddIt
Tumblr
Previous article
Philadelphia Zoo Receives Top Honors at AZA 2017 Conference
Next article
WhiteWater details company highlights at EAS 2017