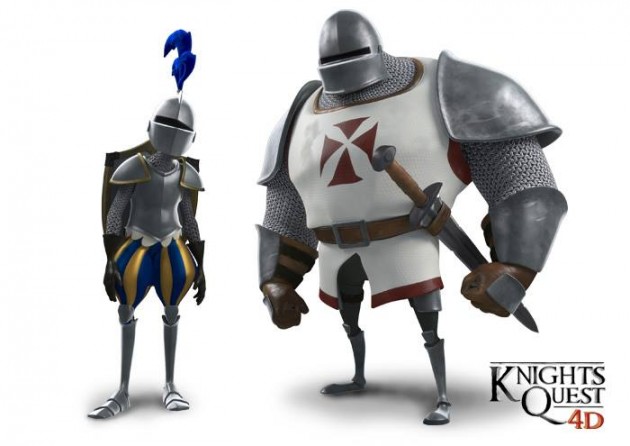 [quote]It’s a family-friendly film, produced with 4D effects in mind, fully immersing the viewer in the battle sequences; but the story has a light-hearted and comedic tone which will appeal to all audiences.” — Ben Smith, Red Star Creative Director[/quote]

Brussels, Belgium and Sheffield, UK (October 07, 2014) /PRNewswire/ — nWave Pictures Distribution is pleased to announce the premiere of its newest 4D/3D attraction film “Knights Quest 4D” at the IAAPA Attractions Expo in Orlando (FL), November 18-21. Distributed exclusively by nWave, the 12-minute experience is available in 4D and 3D to theme parks and attraction exhibitors worldwide. IAAPA attendees will be invited to view the premiere of the film during the IAAPA Trade Show at nWave’s Booth #4836, which will have a specially designed 3D screening facility programed with spectacular 4D special effects.

Directed by James Rodgers and produced by British animation studio Red Star 3D, the film features two medieval knights, each on a quest to be the hero who frees a princess from captivity. Battling against ingenious but deadly traps and puzzles, the knights try every trick to out-run each other, using increasingly desperate maneuvers. But when they discover the castle fortress holds a sinister secret, the two realize that to succeed, they must work together against a common enemy.

IAAPA Attractions Expo is the largest international tradeshow for the global amusement industry, with more than 27,000 attractions professionals attending from around the world.

“The medieval theme is always popular and, together with nWave, we were very excited to explore this classic theme with a modern twist. Our two heroes, strong and silent knights, are complete opposites in every way, but they end up working together to save their lives.” explained Ben Smith, Red Star’s creative director.

Joe Kleimanhttp://wwww.themedreality.com
Raised in San Diego on theme parks, zoos, and IMAX films, InPark's Senior Correspondent Joe Kleiman would expand his childhood loves into two decades as a projectionist and theater director within the giant screen industry. In addition to his work in commercial and museum operations, Joe has volunteered his time to animal husbandry at leading facilities in California and Texas and has played a leading management role for a number of performing arts companies. Joe previously served as News Editor and has remained a contributing author to InPark Magazine since 2011. HIs writing has also appeared in Sound & Communications, LF Examiner, Jim Hill Media, The Planetarian, Behind the Thrills, and MiceChat His blog, ThemedReality.com takes an unconventional look at the attractions industry. Follow on twitter @ThemesRenewed Joe lives in Sacramento, California with his wife, dog, and a ghost.
Share
Facebook
Twitter
Linkedin
Email
Print
WhatsApp
Pinterest
ReddIt
Tumblr
Previous articlePGAV Destinations and COSI Announce New Partnership to Advance Informal Science Education in Developing Countries
Next articleCartoon Network Amazone Opens in Thailand Featuring Unique Attractions from Polin