Set against the backdrop of the record-breaking Solar Impulse 2 round-the-world flight, the 40-minute “FULL CHARGE – The Power of Innovation” (working title) will explore how breakthrough technologies can be developed and applied to solve our planet’s increasing need for clean, efficient, economic and renewable sources of energy.

nWave Pictures announced the agreement with Paris-based N3D LAND Films for the co-production and distribution of the giant screen documentary film. “FULL CHARGE – The Power of Innovation” will be released in Spring 2017 in both 38-minute and 20- minute versions to IMAX® theaters, DCI-compliant digital cinemas and dome theaters. Available formats include: 3D and 2D – 4K/2K digital, IMAX® digital, IMAX® laser and 15-perf./70mm 2D film.

“nWave Pictures is excited to partner with one of our industry’s most respected filmmakers to bring “FULL CHARGE – The Power of Innovation” to the giant screen”, said Eric Dillens, Chairman of nWave Pictures. “With this new film, Pascal’s team at N3D LAND Films builds on their record of award-winning giant screen films that both entertain and inspire audiences worldwide. At nWave Pictures Distribution we have a dedicated sales and marketing team who are committed to bringing films of the highest standard to our giant screen audiences, while providing exceptional educational support and promotional tools for our theater partners.” 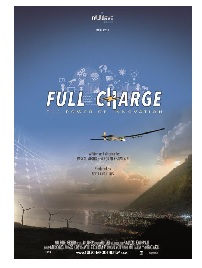 “I am now convinced that an IMAX 3D film is an innovative and very entertaining way of storytelling, and I am sure it is the medium that best matches the importance and greatness of what we are trying to accomplish,” stated Bertrand Piccard, Initiator and President of the Solar Impulse project.

Catherine Vuong, N3D LAND CEO and producer, says, “We are thrilled to have signed with nWave Pictures Distribution, a company that shares not only our love of the big screen but also our ambition to reach, entertain and educate audiences of all generations.”

“While the human adventure is enthralling and captivating, it’s not that simple to make environmental issues – and, in particular, renewable energies – exciting and thrilling for an all-age audience,” says director Pascal Vuong. “With this film, Ronan Chapalain and I are exploring new and immersive ways to educate family audiences on energy issues. Above all, we aim to inspire them to action by examining some of the truly innovative technological solutions being developed throughout the world in the race to reduce global warming and to preserve our future on earth. ‘To both teach and entertain’ was Jules Verne’s motto. It is definitely ours now at N3D LAND.”

Judith Rubin
Judith Rubin ([email protected]) is a leading journalist, publicist, strategist, blogger, content marketing specialist and connector in the international attractions industry. She excels at writing about all aspects of design and technical design, production and project management. Areas of special interest include AV integration and show control, lighting design and acoustics, specialty cinema, digital video and world’s fairs. Judith has ties to numerous industry organizations. From 2005-2020 she ran communications, publications and social media for the Themed Entertainment Association (TEA). In 2013, she was honored with the TEA Service Award. She was development director of IMERSA, and co-chair of the 2014 IMERSA Summit. She was publicist for the Large Format Cinema Association in the 1990s, now part of the Giant Screen Cinema Association (GSCA) and has also contributed to the publications of PLASA, IAAPA and the International Planetarium Society. Already making her mark as a magazine and book editor, Judith joined World’s Fair magazine in 1987, which introduced her to the attractions industry. Launching as a freelancer in the mid 1990s she has contributed to dozens of publications and media outlets including Funworld, Lighting&Sound America, Sound & Communications, Urban Land, The Raconteur and The Planetarian. She joined InPark in 2010. Judith earned a Bachelor of Fine Arts from Pratt Institute. She has lived in New York City and the San Francisco Bay Area, and now makes her home in Saint Louis, where she is active in the local arts and theater community.
Share
Facebook
Twitter
Linkedin
Email
Print
WhatsApp
Pinterest
ReddIt
Tumblr
Previous articleLions and people at ZSL London Zoo: Land of the Lions opens (includes video)
Next articleThe Internet of things, drones and other aspects of InfoComm 2016, Las Vegas