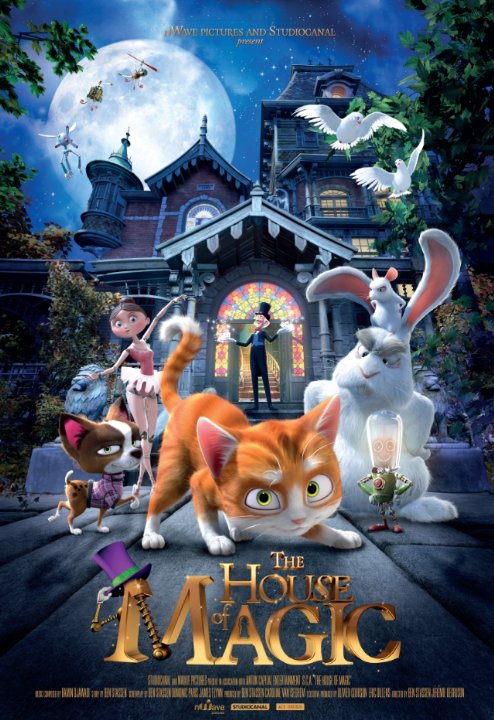 Brussels (Belgium) and Burbank (Calif.) — nWave Pictures is proud to announce the release of the new feature-length 3D animated film”The House of Magic” opening this Christmas in theaters in France, Belgium,South Korea, Singapore and Italy. The 85-minute film, budgeted at $34 million, is produced by nWave Pictures in association with StudioCanal and media fund Anton Capital Entertainment. “The House of Magic” is directed by renowned 3D filmmakers Ben Stassen (“Fly Me to the Moon”, “Sammy’s Adventures: Escape from Paradise”) and Jeremie Degruson, with original music by Ramin Djawadi (“Pacific Rim”, “Game of Thrones”).

“The House of Magic” tells the story of Thunder, an abandoned young cat who stumbles into a magical old mansion operated by a dazzling array of
automatons and gizmos. Owned by a retired magician, the house is occupied by an assortment of his wacky assistants who don’t all welcome the new house guest. But when the magician lands in hospital and his scheming nephew puts the mansion up for sale, our young hero and his new friends join forces to save their magical home.

“This holiday season, our new adventure brings to moviegoers a fun, immersive and engaging experience for the entire family, set in an
intriguing mansion full of wacky and endearing animals like our young hero Thunder the Cat, Lawrence the Magician, Kiki the Chihuahua, Maggie Mouse and Jack Rabbit,” said Ben Stassen, Producer and Director. “During the first twelve of the thirty months we spent in production, we devoted our entire energy to fine-tuning our script and the design of our fifty different characters, always keeping mind our ambition to deliver the best 3D
cinematic experience ever, with the most spectacular ‘in your face’ 3D effects.”

“The upcoming release of our biggest animation achievement so far – bringing to life a unique story with a great sense of humor, positive values
and universal appeal – coincides with the celebration of our company’s 20th anniversary, “said Eric Dillens and Caroline Van Iseghem, nWave Studios’ Chairman and CEO respectively. “We could not dream of a better Christmas gift, thanks to the extraordinary creativity and expertise of our team of artists led by Jeremie Degruson.”

“The House of Magic 3D” is written by James Flynn, Domonic Paris and Ben Stassen, based on an original story idea from Ben Stassen. The film is
produced by Caroline Van Iseghem and Ben Stassen, executive produced by Olivier Courson and Eric Dillens, and features original music by Ramin
Djawadi on his fifth collaboration with nWave Pictures.

nWave also confirms its plans for the 2014 launch of two new 4D attraction films designed for theme park and attraction exhibitors worldwide. “The House of Magic: The 4D Experience” and “The Haunted Mansion 4D” will be available this spring and Halloween respectively. Based on the animated characters from the feature film, and incorporating original material, the two 12-minute films are designed to maximize the impact of visual and special effects for the theme park audience.

To extend the experience, nWave has developed an interactive videogame incorporating the film’s main characters.  Available in English, French, Dutch,German, Italian and Korean and compatible with iOS and Android devices, the game is available from Apple’s App Store and Google’s Play Store.

Joe Kleimanhttp://wwww.themedreality.com
Raised in San Diego on theme parks, zoos, and IMAX films, InPark's Senior Correspondent Joe Kleiman would expand his childhood loves into two decades as a projectionist and theater director within the giant screen industry. In addition to his work in commercial and museum operations, Joe has volunteered his time to animal husbandry at leading facilities in California and Texas and has played a leading management role for a number of performing arts companies. Joe previously served as News Editor and has remained a contributing author to InPark Magazine since 2011. HIs writing has also appeared in Sound & Communications, LF Examiner, Jim Hill Media, The Planetarian, Behind the Thrills, and MiceChat His blog, ThemedReality.com takes an unconventional look at the attractions industry. Follow on twitter @ThemesRenewed Joe lives in Sacramento, California with his wife, dog, and a ghost.
Share
Facebook
Twitter
Linkedin
Email
Print
WhatsApp
Pinterest
ReddIt
Tumblr
Previous article
Blueprint Entertainment Joins with University of Münster for New Explorado Adventure Campus
Next article
Film Submissions Now Being Accepted for 2014 GSCA Film Expo