nWave Pictures has acquired the worldwide distribution rights to Feathered Dinosaurs, a giant screen 3D documentary film produced by Saint Thomas Productions. With its production freshly started, the 40-minute film will be released in 2020. 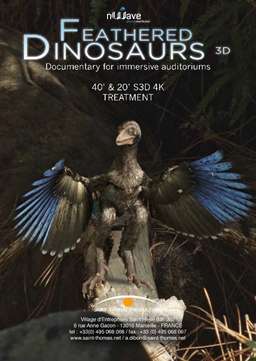 Feathered Dinosaurs will lift the veil on the recent revolution that paleontology is currently undergoing. Since the beginning of the 1990s, thousands of fossils have proved that most dinosaurs had feathers: to seduce, to protect against the cold, to soar and even to fly. There is now no doubt that birds are the direct descendants of a family of carnivorous dinosaurs that included the famous T-Rex.

With Feathered Dinosaurs constructed like a prehistoric safari, producer Bertrand Loyer (A New Prehistory series (2017) Giant Sea Serpent, Meet the Myth (2016)) will take spectators on a voyage a hundred million years into the past and immerse them in the worlds of numerous recently discovered and little-known dinosaur species. It will be an invitation to hunt with the carnivores, dive with the fish-eaters and fly with the insect-eaters.

nWave and Saint Thomas Productions are excited about this collaboration and are looking forward to launching this great film on the market.

“Giant screen theaters are the perfect platform for this revolutionary documentary.” noted Eric Dillens, Chairman of nWave Pictures. “Spectators will be immediately drawn in a universe of pristine quality, mixing state-of-the art 3D animation and spectacular live-shots. Feathered Dinosaurs will present to the public the most recent discoveries on its fascinating protagonists like never before.”

Joe Kleimanhttp://wwww.themedreality.com
Raised in San Diego on theme parks, zoos, and IMAX films, InPark's Senior Correspondent Joe Kleiman would expand his childhood loves into two decades as a projectionist and theater director within the giant screen industry. In addition to his work in commercial and museum operations, Joe has volunteered his time to animal husbandry at leading facilities in California and Texas and has played a leading management role for a number of performing arts companies. Joe previously served as News Editor and has remained a contributing author to InPark Magazine since 2011. HIs writing has also appeared in Sound & Communications, LF Examiner, Jim Hill Media, The Planetarian, Behind the Thrills, and MiceChat His blog, ThemedReality.com takes an unconventional look at the attractions industry. Follow on twitter @ThemesRenewed Joe lives in Sacramento, California with his wife, dog, and a ghost.
Share
Facebook
Twitter
Linkedin
Email
Print
WhatsApp
Pinterest
ReddIt
Tumblr
Previous articleCineplex investing in VRstudios; deal includes up to 40 VR attractions at Cineplex properties
Next articleNew themed land at Wild Adventures to focus on kids and alligators