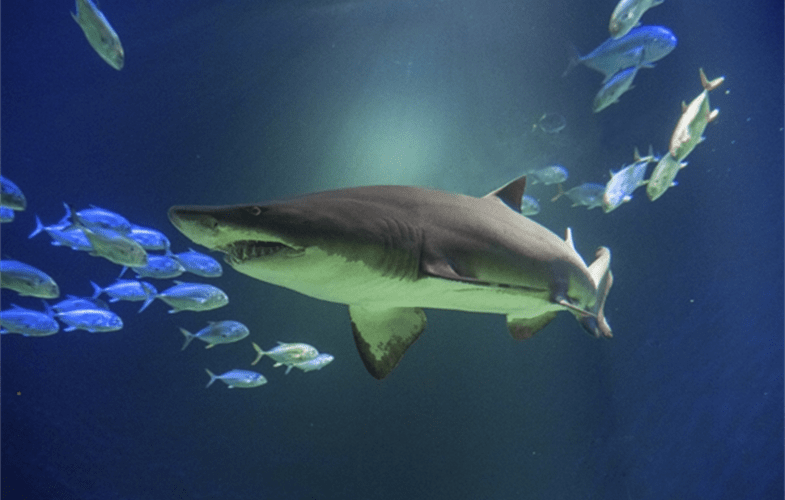 The new exhibit will takes visitors on a journey through nine galleries where they’ll stand eye-to-eye with sharks, rays and hundreds of species of ocean wildlife. As they explore the exhibit, the world deep below the ocean surface is revealed, whether it is in the Coral Reef Tunnel, The New York Bight or the dark and mysterious Hudson Canyon’s Edge with large sand tiger sharks, sandbar sharks, nurse sharks and hundreds of marine species which live off the coast of New York.

Donald Zucker and Barbara Hrbek Zucker Ocean Wonders: Sharks!, a three-story, 57,500-square-foot exhibit building, will drive awareness of the importance of sharks to the health of the world’s oceans; educate visitors about the severe threats sharks face; and inspire guests with the diversity of marine wildlife that exists in the waters around the New York, New Jersey, Connecticut tri-state area. Through cutting-edge and innovative displays, including a shipwreck and shark tagging vessel, the exhibit will create a new generation of conservation stewards. Each year, hundreds of thousands of visitors, and tens of thousands of students in the aquarium’s education programs will learn to value and protect our ocean.

In total, Ocean Wonders: Sharks! will showcase more than 115 marine species, including 18 species of sharks and rays, to tell the 450 million-year-old-story of sharks; their role as top predators; their vulnerability in a world where 100 million sharks every year are lost to unsustainable fishing; and the surprising diversity of sharks and other wildlife in the waters of New York. The exhibit will highlight the work that WCS’ New York Aquarium scientists are doing to protect sharks throughout the region, as well as the conservation efforts of WCS experts globally to protect sharks; and illustrate how the choices we all make in our day-to-day lives affects sharks and their marine habitats.

“The opening of Ocean Wonders: Sharks! is a transformative moment for the New York Aquarium. The exhibit inspires awe and admiration for sharks and opens our visitors’ eyes to what they truly are – keystone species in the world’s ocean which, as top predators, helps to regulate the populations of other species, bringing a vital balance to a healthy ocean. The exhibit will connect millions of visitors with the wildlife and habitats in New York waters and expands the Wildlife Conservation Society’s global commitment to shark and ray conservation,” said WCS CEO and President Cristián Samper.

“We further extend great appreciation to WCS life trustee Barbara Hrbek Zucker and her husband, Donald Zucker, the entire WCS Board of Trustees and other private donors who have generously contributed to the building of Oceans Wonders: Sharks!. Both the public and private supporters of Ocean Wonders: Sharks! have shown strategic leadership advancing the imperative that we must protect sharks, their habitats and our ocean.”

Said Jon Forrest Dohlin, Director of the New York Aquarium and WCS Vice President:, “This exciting new shark exhibit will inspire our visitors to help conserve these amazing animals and awaken them to the reality that the city that never sleeps is surrounded by the sea that never sleeps. With Ocean Wonders: Sharks!, we will bring New Yorkers the miracle of this ocean wilderness surrounded by 20 million people.

“I want to thank all our colleagues throughout WCS who joined in the building of Ocean Wonders: Sharks! during the most difficult time of the aquarium’s history following the destruction wrought by Hurricane Sandy. It is a tremendous accomplishment that has resulted in the most significant exhibit for the New York Aquarium since it first opened in 1896 at Castle Garden in Battery Park.”

Jim Breheny, WCS EVP of Zoos & Aquarium and Director of the Bronx Zoo said, “Ocean Wonders: Sharks! is a perfect example of the higher purpose of zoos and aquariums — the conservation of wildlife and wild places. You can’t go through this exhibit — where you can find yourself just inches from a shark — and not be inspired to join our efforts to save sharks and the ocean.”

Joe Kleimanhttp://wwww.themedreality.com
Raised in San Diego on theme parks, zoos, and IMAX films, Joe Kleiman would expand his childhood loves into two decades as a projectionist and theater director within the giant screen industry. In addition to his work in commercial and museum operations, Joe has volunteered his time to animal husbandry at leading facilities in California and Texas and has played a leading management role for a number of performing arts companies. Joe has been News Editor and contributing author to InPark Magazine since 2011. HIs writing has also appeared in Sound & Communications, LF Examiner, Jim Hill Media, and MiceChat. His blog, ThemedReality.com takes an unconventional look at the attractions industry. Follow on twitter @ThemesRenewed Joe lives in Sacramento, California with his fiancé, two dogs, and a ghost.
Share
Facebook
Twitter
Linkedin
Email
Print
WhatsApp
Pinterest
ReddIt
Tumblr
Previous articleRefurbishment of Europe’s highest wooden coaster begins at Heide Park Resort
Next articleOakland Zoo doubles size with opening of $70 million California Trail on July 12