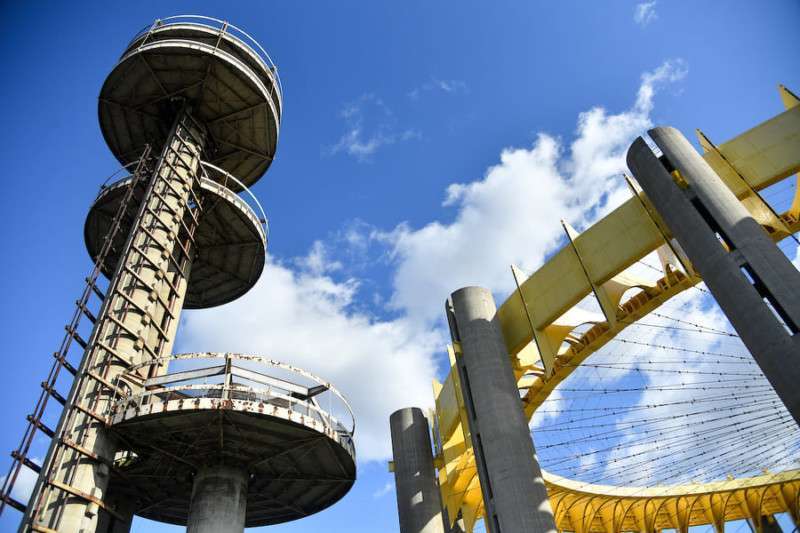 “The New York State Pavilion is an iconic symbol of the 1964 World’s Fair that keeps us connected to our city’s rich history,” said Commissioner Silver. “We are excited to restore this historic structure for the enjoyment of New Yorkers and visitors. Thanks to funding from Borough President Katz, Mayor de Blasio, and Council Member Moya, this treasured landmark will continue to serve as a symbol of Queens for generations to come.”

“The work we are breaking ground on today will go a long way toward restoring the iconic New York State Pavilion to its former glory,” said Queens Borough President Melinda Katz. “This work will enable future generations to continue to enjoy the Pavilion’s distinctive Space Age architecture and be reminded about the important role the 1964-65 World’s Fair played in Queens history. It has been a privilege to work with our partners in government to preserve the Pavilion.”

The project will preserve the iconic structure and add dynamic architectural lighting to enhance the New York State Pavilion experience. Work will include waterproofing of the tower bases, stair replacement, electrical upgrades and structural conservation work on the observation towers. The $24 million project is funded by a $13.1 million allocation from Queens Borough President Melinda Katz, $9 million from Mayor Bill de Blasio, and $1.9 million from Council Member Francisco Moya.

The New York State Pavilion was constructed for the World’s Fair in Flushing Meadows Corona Park. Designed by Philip Johnson, the “Tent of Tomorrow” measures 350 feet by 250 feet, with sixteen 100-foot columns suspending a 50,000 square-foot roof of multi-colored panels. The popular exhibit also held three towers, measuring 60 feet, 150 feet, and 226 feet. The two shorter towers held cafeterias for the fair, and the tallest tower, as the highest point of the fair, held an observation deck. The New York State Pavilion also included the adjacent “Theaterama,” which exhibited pop art works by Andy Warhol and Roy Lichtenstein. The space was converted to the Queens Playhouse in 1972 and continued to operate until 1985.

Joe Kleimanhttp://wwww.themedreality.com
Raised in San Diego on theme parks, zoos, and IMAX films, InPark's Senior Correspondent Joe Kleiman would expand his childhood loves into two decades as a projectionist and theater director within the giant screen industry. In addition to his work in commercial and museum operations, Joe has volunteered his time to animal husbandry at leading facilities in California and Texas and has played a leading management role for a number of performing arts companies. Joe previously served as News Editor and has remained a contributing author to InPark Magazine since 2011. HIs writing has also appeared in Sound & Communications, LF Examiner, Jim Hill Media, The Planetarian, Behind the Thrills, and MiceChat His blog, ThemedReality.com takes an unconventional look at the attractions industry. Follow on twitter @ThemesRenewed Joe lives in Sacramento, California with his wife, dog, and a ghost.
Share
Facebook
Twitter
Linkedin
Email
Print
WhatsApp
Pinterest
ReddIt
Tumblr
Previous article
Celebrate the holidays with FRIENDS in Boston
Next article
RealMotion partners with Smart Monkeys’ ISAAC to turn a guitar-shaped hotel into a Hard Rockin’ show