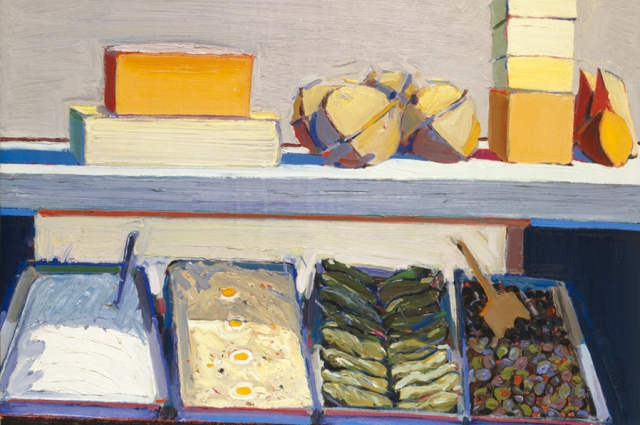 [quote]Fertile Ground is just as interested in how the art came to be as it is in the art itself.  These four moments arose from unique combinations of time, place, and personality. They were creative ‘hothouses’ which flourished, sometimes briefly, changing art in important ways. We hope visitors will recognize times when their own lives were energized by fertile ground.” — OMCA Curator of Photography & Visual Culture Drew Johnson[/quote]

Oakland and San Francisco, CA, USA — The Oakland Museum of California (OMCA) and the San Francisco Museum of Modern Art (SFMOMA) combine their collections for the first time in Fertile Ground: Art and Community in California, an unprecedented exhibition that illuminates local histories and social forces that changed the face of art in—and beyond—the state of California.

Weaving together the museums’ unsurpassed holdings of California art and ephemera, the exhibition tells the stories of four creative communities active in the northern part of the state between the 1930s and the early 2000s. In each case, the exhibition shines a spotlight on artists who had their finger on the pulse of their time, and the grassroots conditions that allowed their ideas to flourish. The exhibition runs September 20, 2014 through April 12, 2015 in OMCA’s Great Hall and features an astounding mix of artworks and historical documents, from monumental paintings to handwritten letters, relating to four key moments in the history of California art:

Curated jointly by Drew Johnson, OMCA Curator of Photography and Visual Culture, and a team from SFMOMA including Janet Bishop, Caitlin Haskell, and Peter Samis, Fertile Ground interweaves the histories and friendships of artists, collectors, curators, and other individual and institutional collaborators against a backdrop of transformative social change. Viewed together, the materials assembled present a rare opportunity to consider what catalyzed these four remarkable outpourings of creativity, social awareness, and arts patronage.

During the heart of the Great Depression, the muralist Diego Rivera and his young wife, painter Frida Kahlo, moved from Mexico to San Francisco. Although they came to the city for Rivera to paint the monumental fresco Allegory of California (1930-31) at the Pacific Stock Exchange, the couple arrived to find a community of like-minded, socially-aware artists that included Dorothea Lange, Sargent Johnson, and the Coit Tower muralists—artists who insisted on the primacy of workers and the rights of the unemployed even as they executed commissions for the Federal government.

Postwar at the California School of Fine Arts

In the years immediately following World War II, artists and administrators active at the California School of Fine Arts (CSFA; now San Francisco Art Institute), played a decisive role in shaping national conversations about advanced painting. CSFA became a critical site where, even after the tenures of the great Abstract Expressionists Clyfford Still and Mark Rothko, debates about the continued relevance of the human figure spurred surprising innovation in the work of David Park and Richard Diebenkorn.

In the late 1950s, the agrarian town of Davis was shaken up by a brand new University of California campus, which included a studio art faculty with painters and sculptors such as Robert Arneson, Wayne Thiebaud, and William T. Wiley, and students including Bruce Nauman. During the remarkable tenure of the founding art faculty, the formerly sleepy town of Davis became a haven for new freedoms of expression, often sourced in the pop objects and imagery of a brand new consumer society.

The most recent moment highlighted in the exhibition takes us to San Francisco’s Mission District during the dot-com boom of the 1990s, when a renegade band of artists including Margaret Kilgallen and Barry McGee formulated an aesthetic of resistance born of handmade traditions, the better to reject the tech-based, capital-intensive society that they feared would steamroll not only their neighborhood, but the human spirit at large.

“It is exciting to be able to share stories in Fertile Ground that can be told in richer, more nuanced ways through our two collections than either museum could tell on its own,” says SFMOMA Curator of Painting and Sculpture Janet Bishop. “SFMOMA has learned a tremendous amount from OMCA’s multidisciplinary approach.”

Fertile Ground: Art and Community in California is made possible in part by generous support from the Oakland Museum Women’s Board.

Fertile Ground: Art and Community in California is part of SFMOMA’s On the Go program of collaborative museum exhibitions and other off-site presentations taking place while its building is temporarily closed for expansion construction through early 2016. While OMCA and SFMOMA have partnered on projects in the past, Fertile Ground represents the deepest collaboration in the shared history of the two institutions.

Joe Kleimanhttp://wwww.themedreality.com
Raised in San Diego on theme parks, zoos, and IMAX films, Joe Kleiman would expand his childhood loves into two decades as a projectionist and theater director within the giant screen industry. In addition to his work in commercial and museum operations, Joe has volunteered his time to animal husbandry at leading facilities in California and Texas and has played a leading management role for a number of performing arts companies. Joe has been News Editor and contributing author to InPark Magazine since 2011. HIs writing has also appeared in Sound & Communications, LF Examiner, Jim Hill Media, and MiceChat. His blog, ThemedReality.com takes an unconventional look at the attractions industry. Follow on twitter @ThemesRenewed Joe lives in Sacramento, California with his fiancé, two dogs, and a ghost.
Share
Facebook
Twitter
Linkedin
Email
Print
WhatsApp
Pinterest
ReddIt
Tumblr
Previous articleNational Aquarium Evaluates Its Future and That of Its Dolphins
Next articleProSlide Whets the Thrill Appetite at Wet’n’Wild Sydney