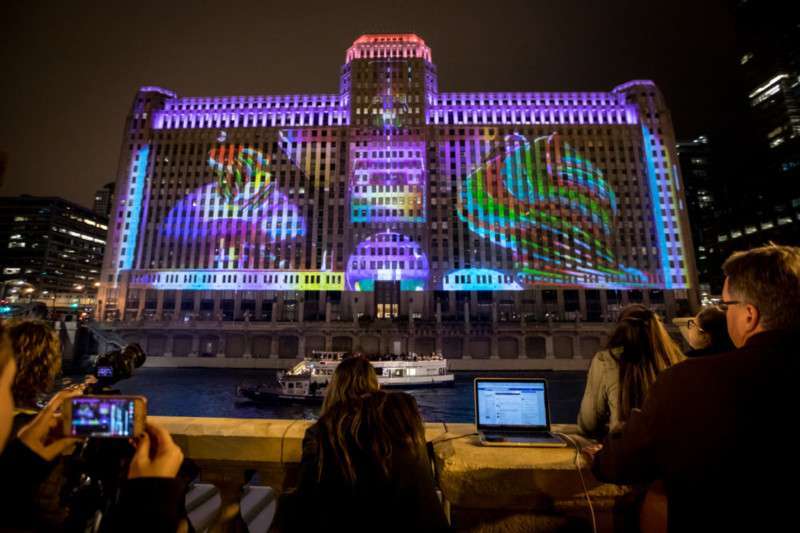 Obscura, known for creating one of a kind immersive experiences, recently launched what is hailed as the world’s largest permanent projection mapping display on Chicago’s theMART, formerly known as the Merchandise Mart. Titled “Art on theMART,” Obscura used 34 Christie Boxer 4K30 projectors to beam over 1 million lumens onto the 2.5 acre south façade of the iconic building. 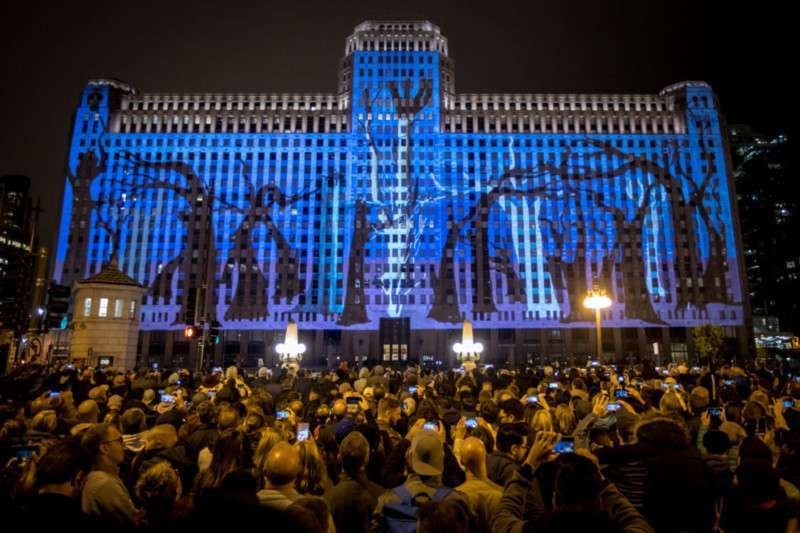 The Windy City is known for its public works of art – from Cloud Gate (aka “The Bean”) to Chicago Picasso – and the owners of theMART, Vornado Realty Trust, approached Obscura to create an attraction that would celebrate this rich heritage, as well as contribute to the ongoing revitalization of the Chicago Riverwalk. With an impressive resume of large scale projection mapping projects including the Vatican and the Empire State building, Obscura was more than up to the task of projecting onto what was once the largest building in the world (with 4 million square feet of floor space and its own zip code until 2008).

“When we took on the project we knew it was a huge building, but I would call it a happy accident when we realized it would be the largest permanent projection mapping display of its kind in the world,” saysWill Chase,head of communications, Obscura. “I think that added to the normal pressure you feel when you take on a project, but with a world class team like ours, we can accomplish practically anything.” 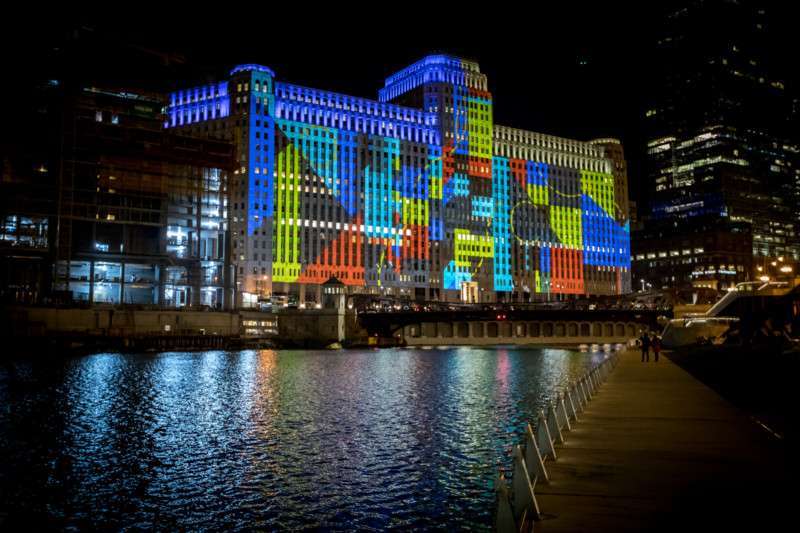 The Obscura team got right to work by creating a digital 3D model of the building from a laser scan to account for the architectural features of theMART and to determine the projector configuration. Obscura also developed a content management solution to provide show control, and to allow theMART curatorial team to easily upload and render the projection mapping content. This included masking the windows with special software so the projectors wouldn’t shine light into the building interior.

To house the 34 Christie Boxer projectors, Obscura worked with Vornado and architectural firm Valerio Dewalt Train Associates (VDTA) to design a custom enclosure located across the Chicago River. “The projectors are housed in an architecturally integrated custom enclosure with a glass curtain wall and all the required mechanical and electrical systems,” says Nathan Houchin,senior technical producer, Obscura Digital. The enclosure protects the projectors from the elements, as the show is scheduled to run from March to December, five nights a week (Wednesday – Sunday). 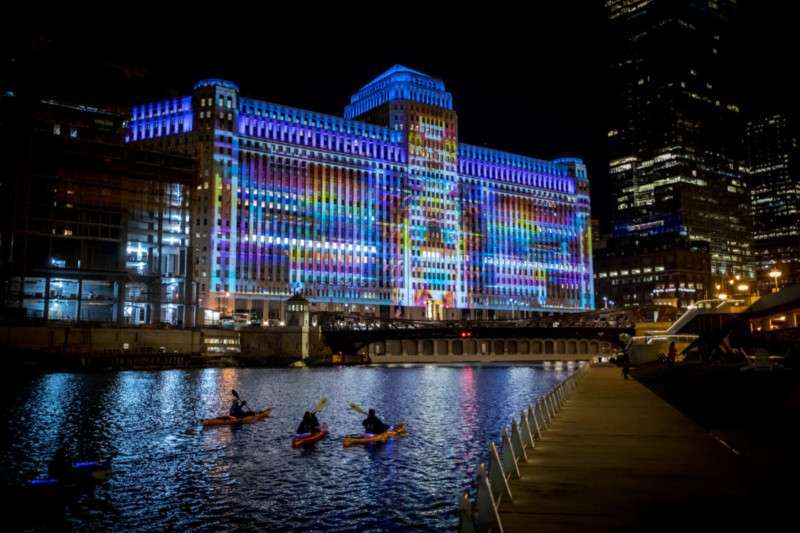 The main channels have 16 projectors each, stacked to increase brightness, with the center channel, covering the center tower, having two projectors stacked. All are blended together to create one seamless image.

With such a demanding show schedule, Obscura knew that they needed high-brightness, reliable projectors capable of managing not only the giant façade, but also the ambient light from street lights, traffic, other buildings, and light reflecting off the Chicago River itself. After performing projector tests, the Christie Boxer 4K30 projectors were the clear and cost effective choice, noted Chase. 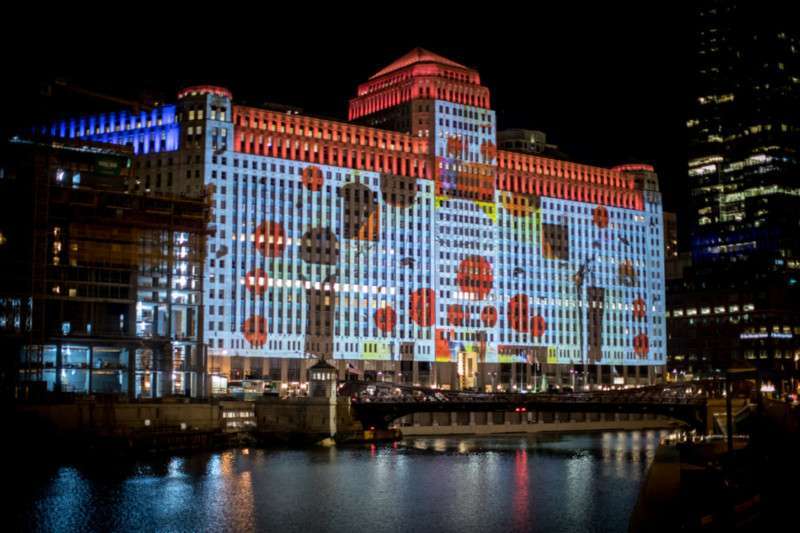 Diana Thater, Zheng Chongbin, Jason Salavon and Jan Tichy – all renowned contemporary artists−were commissioned to create work for the inaugural program, which launched on September 29 and will remain on view through December.Art on theMART selected and commissioned the work by Thater and Chongbin, while Salavon and Tichy were commissioned by the Terra Foundation for American Art and confirmed by an esteemed Curatorial Advisory Board comprised of several of the Chicago’s most distinguished arts and culture leaders.

The reaction to the installation has exceeded expectations. “People were surprised and delighted — and blown away — by the projections, as they transformed theMART’s façade into a massive artistic canvas. We’re very proud to have worked on a project that will bring a new dimension of art and creativity to Chicago for years to come,” says Chase. 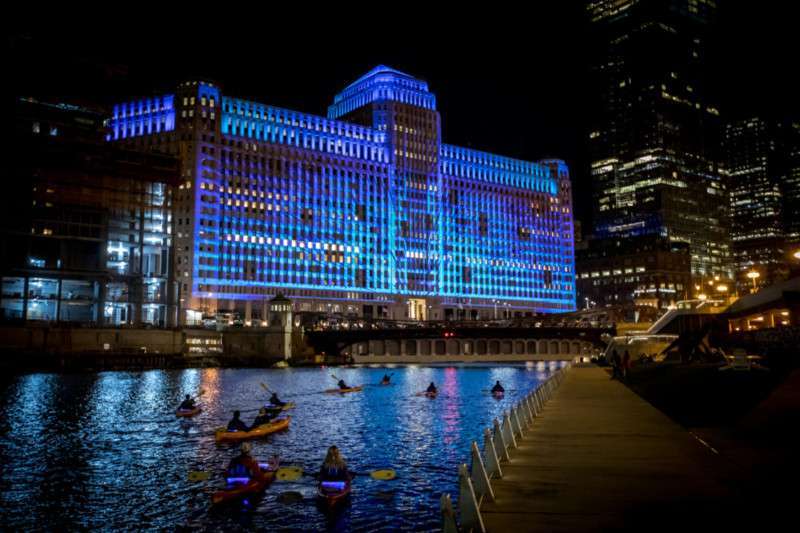 “TheMART and Vornado Realty Trust are thrilled with the success of the inauguration of Art on theMART, a gift to the people of Chicago, who widely embraced this monumental new platform for public art,” said Art on theMART Executive Director Cynthia Noble.“We are proud of the works by the initial risk-taking artists—Diana Thater, Zheng Chongbin, Jason Salavon and Jan Tichy—and look forward to welcoming a range of perspectives over the next thirty years.” She added, “We thank the City of Chicago, especially Mayor Rahm Emanuel, Department of Cultural Affairs and Special Events Commissioner Mark Kelly, 42nd Ward Alderman Brendan Reilly and our launch partners Obscura Digital and the Terra Foundation for American Art.”

Joe Kleimanhttp://wwww.themedreality.com
Raised in San Diego on theme parks, zoos, and IMAX films, InPark's Senior Correspondent Joe Kleiman would expand his childhood loves into two decades as a projectionist and theater director within the giant screen industry. In addition to his work in commercial and museum operations, Joe has volunteered his time to animal husbandry at leading facilities in California and Texas and has played a leading management role for a number of performing arts companies. Joe previously served as News Editor and has remained a contributing author to InPark Magazine since 2011. HIs writing has also appeared in Sound & Communications, LF Examiner, Jim Hill Media, The Planetarian, Behind the Thrills, and MiceChat His blog, ThemedReality.com takes an unconventional look at the attractions industry. Follow on twitter @ThemesRenewed Joe lives in Sacramento, California with his wife, dog, and a ghost.
Share
Facebook
Twitter
Linkedin
Email
Print
WhatsApp
Pinterest
ReddIt
Tumblr
Previous articleAV Stumpfl to exhibit projection screen systems and PIXERA media servers at LDI 2018
Next articleSony Pictures and Two Bit Circus to be among presenters at Entertainment Experience Evolution Conference