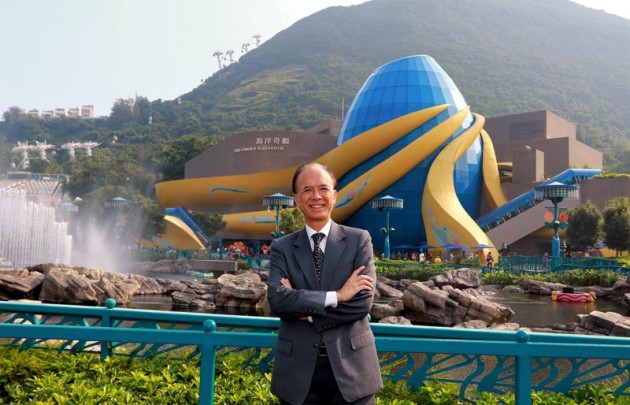 Hong Kong — Ocean Park has announced the appointment of Mr. Matthias Li as the new Chief Executive of Ocean Park Corporation (OPC) effective 1 July 2016. Having served as Deputy Chief Executive of OPC since 2007, Mr. Li will succeed Mr. Tom Mehrmann, who decided to pursue new career opportunities in an advisory capacity after 12 years at the position, and will help with the transition process until 31 July. Ocean Park will explore opportunities to continue benefiting from Mr. Mehrmann’s expertise by engaging his advisory services.

Mr. Li joined Ocean Park as Finance Director and Corproate Secretary in 1994, and has been serving as Deputy Chief Executive and Chief Financial Officer since 2007. He has also been a trustee of Ocean Park Conservation Foundation, Hong Kong since 1995. Over the years, Mr. Li has become a leader in the industry, serving as Vice Chair of the China Association of Amusement Parks and Attractions (CAAPA), Board of Director and Chairman of the Asia Pacific Regional Advisory Committee of the International Association of Amusement Parks and Attractions (IAAPA). He also holds leadership roles in the China Ropeway Association and the National Aquatic Wildlife Conservation Association and its China Aquarium Committee. In 2015, Mr. Li was awarded “Leader of the Chinese Theme Park Industry” by CAAPA in recognition of his contributions to the rapid development of China’s theme park industry, his efforts in promoting the ride safety standards and more.

Mr. Leo Kung, Chairman of Ocean Park, said, “The Board considered a number of highly qualified candidates during our exhaustive 5-month long global search process. In the end, it was obvious to the entire Board that the ideal candidate has been right here in Ocean Park all along. With over 20 years of experience in Ocean Park’s strategic planning, business operations and development, Matthias embodies our core values and understands well our operating system and culture. He not only commands tremendous respect from our entire staff, but also enjoys a strong relationship with our various stakeholders, from the local community to our industry and conservation partners in the Mainland and round the world. As Matthias has been working closely alongside Tom in leading our transformation into an award-winning theme park, the Board has every confidence that under Matthias’ leadership, Ocean Park will continue to evolve into a premier international destination resort. On behalf of the Board, I would like to extend our sincere gratitude to Tom for his exceptional leadership and contributions over the past 12 years.”

Mr. Matthias Li said, “I am honoured by the trust bestowed on me by the Board to lead Hong Kong’s home-grown world-class theme park. Over the past 22 years, I have developed a deep passion for Ocean Park, not only from working alongside Tom and the entire staff to transform a local recreational facility into an international tourist destination, but also from experiencing up-close the pride locals derive from their people’s park.”

During the past 12 years, Ocean Park has successfully completed the Master Redevelopment Plan, which more than doubled the number of attractions and culminated in the Park winning the 2012 Applause Award, the most prestigious international industry award. In 2014, Ocean Park was ranked by TripAdvisor as second among the best theme parks in Asia; and by the TEA/AECOM Global Attractions Attendance Report as first in China, second in Asia and 13th in the world among the best amusement parks and water parks.

Mr. Li added, “My immediate focus is to face the challenges presented by the changes in Hong Kong’s visitor profile and the intense competition in the region. Besides continuing our promotional work in the Mainland, we will step up our efforts in outreaching Asian markets such as Korea, Taiwan, India, Thailand, the Philippines and Indonesia. Korea and India will be our priority targets as they were our top two source markets of Frequent Independent Travellers (FITs), excluding China, in 2014/15. We will also continue to drive local attendance through new promotions and enhanced in-park experiences. Following our March offer of one free child ticket for every adult ticket purchased at 7-Eleven, we will introduce in April a new Premium SmartFun Annual Pass on top of the existing Gold Pass and Silver Pass. Premium Pass members are entitled to a number of enhanced privileges, including unlimited Park entrance and the inclusion of the Ocean FasTrack priority access service, as well as coupons worth more than HK$1,000. Privileges for Gold Pass and Silver Pass memberships will be enhanced as well. Looking further ahead, we are excited by the opportunities presented by the arrival of the MTR South Island Line later this year, the development of the Hong Kong Ocean Park Marriott Hotel and the Water World, an all-weather water park, as well as the progress made on the development of The Fullerton Hotel @ Ocean Park, which will soon be presented to the Town Planning Board for approval, targeting to commence construction in 2017.”

Mr. Tom Mehrmann said, “I am very gratified that the Board has chosen Matthias to be the new Chief Executive of Ocean Park. Matthias has made substantial contributions to the Park’s operation and development over the past 22 years, including playing a major role in establishing the Park’s ‘Big 5’ seasonal events. I have always treasured his counsel and admired his passion for conservation; and I shall work closely with him to ensure a smooth transition process. As I embark on the next phase of my career after 12 tremendous years at Ocean Park, I look forward to the opportunity to contribute to the Park’s development in a different role.”

Mr. Kung concluded, “Knowing that Tom will be starting a new career opportunity advising themed attractions, we very much look forward to the opportunity of working with him in the future, so that Ocean Park can continue to benefit from his experience and insights.”

Joe Kleimanhttp://wwww.themedreality.com
Raised in San Diego on theme parks, zoos, and IMAX films, Joe Kleiman would expand his childhood loves into two decades as a projectionist and theater director within the giant screen industry. In addition to his work in commercial and museum operations, Joe has volunteered his time to animal husbandry at leading facilities in California and Texas and has played a leading management role for a number of performing arts companies. Joe has been News Editor and contributing author to InPark Magazine since 2011. HIs writing has also appeared in Sound & Communications, LF Examiner, Jim Hill Media, and MiceChat. His blog, ThemedReality.com takes an unconventional look at the attractions industry. Follow on twitter @ThemesRenewed Joe lives in Sacramento, California with his fiancé, two dogs, and a ghost.
Share
Facebook
Twitter
Linkedin
Email
Print
WhatsApp
Pinterest
ReddIt
Tumblr
Previous articleTwo Themed Attraction Veterans Named to SeaWorld Entertainment Board of Directors
Next articleJim Ogul on world’s fairs: Astana ’17 hires Hill International; expects 5 M visits