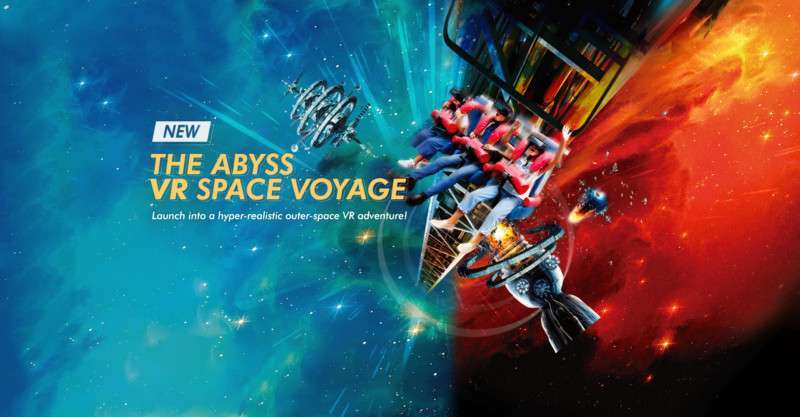 This summer, Ocean Park presents Hong Kong’s first ever virtual reality (VR) free fall ride, The Abyss – VR Space Voyage. As guests put on VR headsets for the upgraded ride, they will see breathtaking views of outer space and experience the adrenaline rush from the free fall during their mission to Saturn’s largest moon – Titan.

Dr Ericsson said, “I am delighted to be involved in this project with Ocean Park. The Abyss – VR Space Voyage has a very pertinent backstory as it concerns humanity looking for an alternative habitat to the earth due to problems in the earth’s environment. The Abyss Space Voyage looks to engage and educate the public about space exploration in a fun way, something which is very close to my heart as an engineer. As we look to inspire the next generation of space scientists and explorers, I hope the ride will trigger the interest of young adults in the subject, while also providing them with a thrilling experience.”

Timothy Ng, Ocean Park’s Executive Director of Operations and Entertainment, said, “Ocean Park is always looking for innovative ways to enhance our guests’ experience. Following the success of our VR Mine Train, we are expanding our VR offerings with The Abyss – VR Space Voyage by converting the existing ride, giving guests a thrilling outer space experience as they plunge to the ground at fantastic speeds. Not only the ride itself, the pre-show section including interactive games and informative video on space facts will also help further our education mission, making the experience complete, educational and fun.”

The story is set in the reality of the earth facing irreversible environmental issues, such as climate change, resulting in the exploration of a new habitable place in the universe. As members of the “Ocean Park Mission Titan” team, guests will be launched into space to investigate Titan. Yet, meteorites strike and guests are sent on a thrilling journey as they evacuate Saturn’s moon and return to the earth.

To prepare space travelers for the voyage to Titan, guests will first go through an educational pre-show experience. With the aid of information boards, they will learn more about the background of Titan exploration. The augmented reality (AR) game that follows includes activities where guests collect resources to build defense systems on Titan, such as rocket silos and shield generators. Guests will also watch a mission briefing video, which fully equips the explorers with the background knowledge.

Joe Kleimanhttp://wwww.themedreality.com
Raised in San Diego on theme parks, zoos, and IMAX films, Joe Kleiman would expand his childhood loves into two decades as a projectionist and theater director within the giant screen industry. In addition to his work in commercial and museum operations, Joe has volunteered his time to animal husbandry at leading facilities in California and Texas and has played a leading management role for a number of performing arts companies. Joe has been News Editor and contributing author to InPark Magazine since 2011. HIs writing has also appeared in Sound & Communications, LF Examiner, Jim Hill Media, and MiceChat. His blog, ThemedReality.com takes an unconventional look at the attractions industry. Follow on twitter @ThemesRenewed Joe lives in Sacramento, California with his fiancé, two dogs, and a ghost.
Share
Facebook
Twitter
Linkedin
Email
Print
WhatsApp
Pinterest
ReddIt
Tumblr
Previous articleChristie ultra-short throw laser projectors bring history of Bilbao Athletic Club to vivid life
Next articleParamount enters new relationship with London Resort