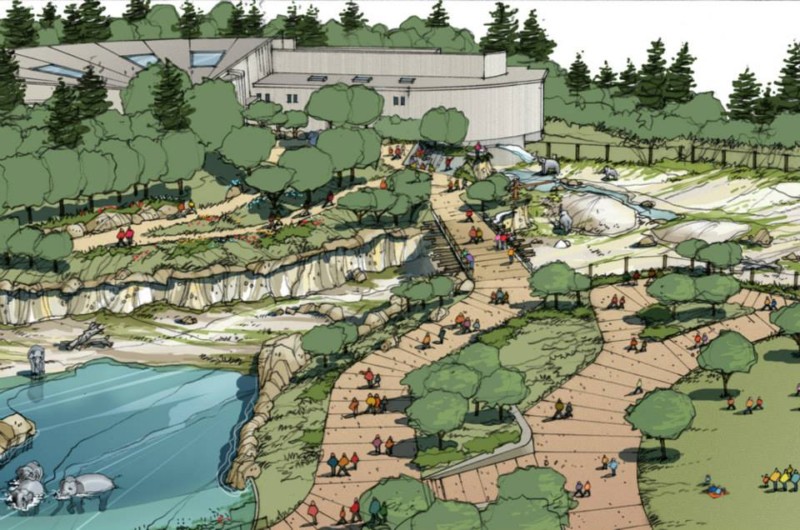 [quote]Elephant Lands is all about elephants having choices and activity. — Kim Smith[/quote]

Portland, OR, USA — Construction of the $57 million Elephant Lands, the most ambitious project in Oregon Zoo history, reached a milestone Feb. 21, as crews completed work on what’s now known as the Encounter Habitat, a sandy field in the southern portion of the habitat, adjacent to the zoo concert lawn.

And on Feb. 22, when Samudra and the rest of Portland’s elephant family ventured into these new digs for the first time, they were taking a big step into history and a new era of animal welfare.

“Samudra strolled out right away,” said Bob Lee, the zoo’s elephant curator. “He only slowed down long enough to eat every piece of fruit and vegetable in his path. Chendra sprinted out close behind, inspiring Sam to quicken his pace and venture even further into the habitat. Rose-Tu was ready to go along, but Lily kept turning back to check on her Auntie Shine, who was a little shy about coming out to play. Once the rest of the elephant family was in the new habitat though, Shine ambled out to join them.”

Lee said the elephant family will be acclimating to the new area at its own pace in the coming weeks, and visitors may catch glimpses of them through construction fences or from the AfriCafe patio across the concert lawn.

“It’s only going to get bigger and better from here,” Lee said.

To keep the herd comfortable during the building of Elephant Lands, animal-care staff and construction managers devised a Tetris-like phasing plan to gradually expand the elephants’ accessible space. The entire habitat — which will be four times larger than the current one — will be completed in fall of 2015.

Elephant Lands, part of the community-supported zoo bond measure, will extend around the eastern edge of the zoo, from south of the current elephant habitat north into the area that formerly housed Elk Meadow.

With rolling meadows, 4-foot-deep sand and one of the world’s largest indoor elephant facilities, the new habitat will also offer unique views of the zoo’s herd. Within Forest Hall, visitors on elevated walkways will view elephants within a vast airy arena lit by filtered sunlight with a backdrop of native fir forest.

“We’ve designed a world-class home that honors this amazing species,” said Kim Smith, zoo director. “The elephants will have more freedom to choose when and what they want to do, and who they want to spend time with. We think it’s going to be a game-changer for elephants worldwide and help raise the bar for animal welfare.”

Joe Kleimanhttp://wwww.themedreality.com
Raised in San Diego on theme parks, zoos, and IMAX films, InPark's Senior Correspondent Joe Kleiman would expand his childhood loves into two decades as a projectionist and theater director within the giant screen industry. In addition to his work in commercial and museum operations, Joe has volunteered his time to animal husbandry at leading facilities in California and Texas and has played a leading management role for a number of performing arts companies. Joe previously served as News Editor and has remained a contributing author to InPark Magazine since 2011. HIs writing has also appeared in Sound & Communications, LF Examiner, Jim Hill Media, The Planetarian, Behind the Thrills, and MiceChat His blog, ThemedReality.com takes an unconventional look at the attractions industry. Follow on twitter @ThemesRenewed Joe lives in Sacramento, California with his wife, dog, and a ghost.
Share
Facebook
Twitter
Linkedin
Email
Print
WhatsApp
Pinterest
ReddIt
Tumblr
Previous articleCONCEPT ART: To Go Where No Spaniard Has Gone Before – Star Trek in Murcia
Next articleGaylord Rockies to Include Indoor and Outdoor Waterpark