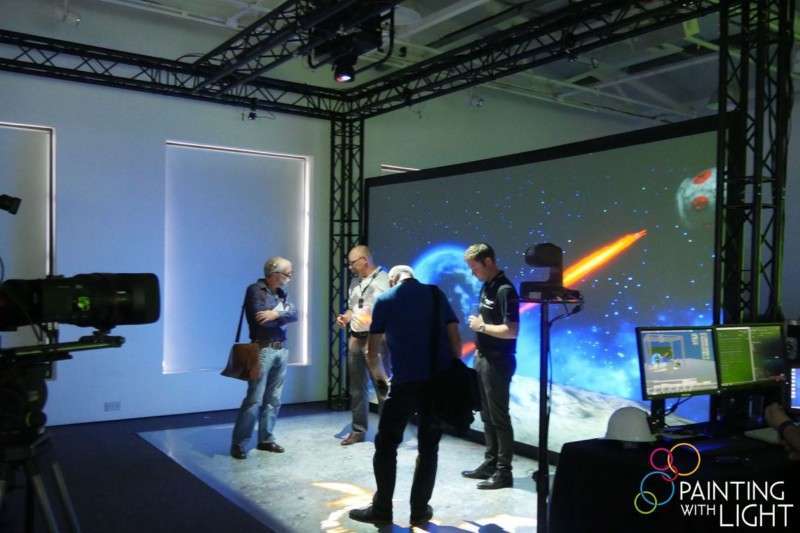 The AV industry delivers few more compelling spectacles than projection mapping – and at ISE 2018, real-time motion tracking company BlackTrax is once again be making a key contribution to what is expected to be yet another visual extravaganza on the Panasonic stand (1-H20).

“Panasonic’s stand has long been a must-see at ISE as the company demonstrates what is possible when creative minds meet advanced technologies, so it’s only natural that BlackTrax be included in our showstopper!” said Harmut Kulessa, European Marketing Manager at Panasonic.

Like last year, the showcase was designed by concept developer Painting with Light, a certified BlackTrax studio based in Belgium. It combines visual art performers, laser projection technology, 3D mapping and tracking, holographs and projection – “so that the lines between what is real and what is virtual will be impossible to distinguish,” said Luc Peumans, CEO and Creative Director at Painting with Light.
BlackTrax is providing its tracking technology, with beacons attached to the fingers of the live performers. Information about the detailed movements of each performer is then passed to a disguise (formerly d3 Technologies) media server, which orchestrates lighting and video to ensure a cue-perfect performance.

“With BlackTrax, no-one misses a cue,” said Marty Cochrane, BlackTrax Product Manager. “Even in the most complex, most demanding shows, everything is where it needs to be, on time, every time, without the possibility of human error.”

BlackTrax is a vision-based system that connects to a range of third party applications, such as robotic lights, media servers, and any other third-party products that accept the RTTrPM open protocol. It can capture and pass positional 3D (X,Y,Z) and 6D rotation (yaw, pitch, roll) data to automation controllers. BlackTrax is acknowledged as the world’s most stable and functional tracking product, and has been deployed in over 8,000 shows globally from the recent Queen + Adam Lambert tour through Cirque du Soleil and the Eurovision Song Contest to major product launches and Live Broadcast shows.

Joe Kleimanhttp://wwww.themedreality.com
Raised in San Diego on theme parks, zoos, and IMAX films, InPark's Senior Correspondent Joe Kleiman would expand his childhood loves into two decades as a projectionist and theater director within the giant screen industry. In addition to his work in commercial and museum operations, Joe has volunteered his time to animal husbandry at leading facilities in California and Texas and has played a leading management role for a number of performing arts companies. Joe previously served as News Editor and has remained a contributing author to InPark Magazine since 2011. HIs writing has also appeared in Sound & Communications, LF Examiner, Jim Hill Media, The Planetarian, Behind the Thrills, and MiceChat His blog, ThemedReality.com takes an unconventional look at the attractions industry. Follow on twitter @ThemesRenewed Joe lives in Sacramento, California with his wife, dog, and a ghost.
Share
Facebook
Twitter
Linkedin
Email
Print
WhatsApp
Pinterest
ReddIt
Tumblr
Previous articleLEGOLAND Florida Resort to Open Great LEGO Race VR Coaster March 23
Next articleChristie Introduces SDVoE Content Delivery for Boxer Projectors