ParadropVR nears one million rides in 2019, will exhibit at IAAPA Expo Asia 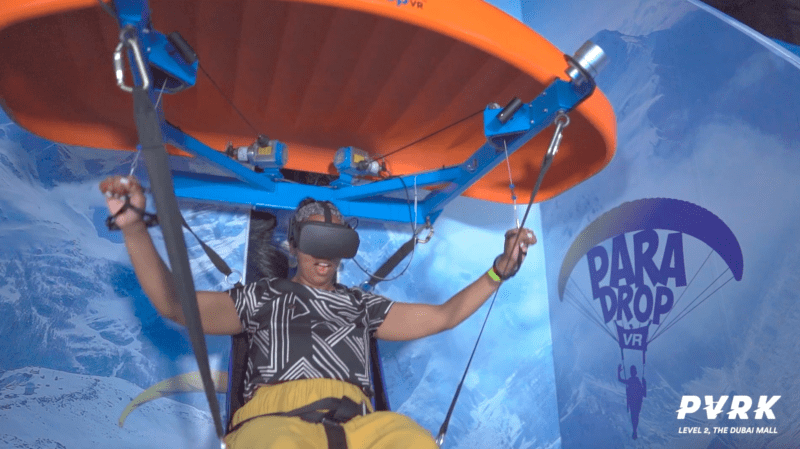 Immersive adventure attraction ParadropVR is on target to hit over one million rides across all its global locations in 2019, according to leisure and entertainment specialist Frontgrid Ltd.

Total ride numbers have received a boost in the second quarter of 2019, thanks to the record-breaking launch of ParadropVR at the VR Park, Dubai. Ride utilization and revenue figures from the immersive adventure attraction have out-performed all other virtual reality attractions since launching at the park in March, operator Emaar Entertainment has revealed.

An increase in guests at existing locations including Universe Science Park, iFLY and Merlin Entertainment’s The Bear Grylls Adventure has also contributed to the strong results, which saw numbers increase by over 70% from Q1 2019.

New ParadropVR installations planned for the remainder of the year are expected to increase numbers further still. The world-first ParadropVR City Flyer is set to launch at the King Power Mahanakhon in Bangkok this summer, with new installations in Malaysia, India, the United Kingdom and the Kingdom of Saudi Arabia due to follow in the second half of 2019.

Frontgrid co-founder and CEO, Matt Wells said: “Since launching our first installation in spring 2017, ParadropVR has consistently exceeded expectations in terms of performance, reliability and crucially – ability to generate revenue and footfall for operators.”

“With strong performance from our existing sites and several more installations launching this year, we are firmly on-track to cement our position as a global leader in the design and implementation of immersive, adventurebased attractions for the location based entertainment and leisure industry.”

“We’re incredibly pleased by these latest results. With number of new themes, concepts and games in development for release in Q4 – 2019 is shaping-up to be a really exciting year for Frontgrid and ParadropVR”.

“We look forward to meeting old and new friends at IAAPA Asia in Shanghai, and to what we hope will be a very successful show”.

Visitors to IAAPA Expo Asia are invited to find out more about ParadropVR by arranging to meet with co-founder and CEO, Matt Wells at the show. ParadropVR will be exhibiting with Simworx on Booth 1650 from June 12th to 14th. To book a time to meet, contact [email protected]

Joe Kleimanhttp://wwww.themedreality.com
Raised in San Diego on theme parks, zoos, and IMAX films, InPark's Senior Correspondent Joe Kleiman would expand his childhood loves into two decades as a projectionist and theater director within the giant screen industry. In addition to his work in commercial and museum operations, Joe has volunteered his time to animal husbandry at leading facilities in California and Texas and has played a leading management role for a number of performing arts companies. Joe previously served as News Editor and has remained a contributing author to InPark Magazine since 2011. HIs writing has also appeared in Sound & Communications, LF Examiner, Jim Hill Media, The Planetarian, Behind the Thrills, and MiceChat His blog, ThemedReality.com takes an unconventional look at the attractions industry. Follow on twitter @ThemesRenewed Joe lives in Sacramento, California with his wife, dog, and a ghost.
Share
Facebook
Twitter
Linkedin
Email
Print
WhatsApp
Pinterest
ReddIt
Tumblr
Previous articleNational Museum of African American History and Culture’s Lonnie Bunch to be next Smithsonian Secretary
Next articleCYBORG Hyper Drive opens at Six Flags New England