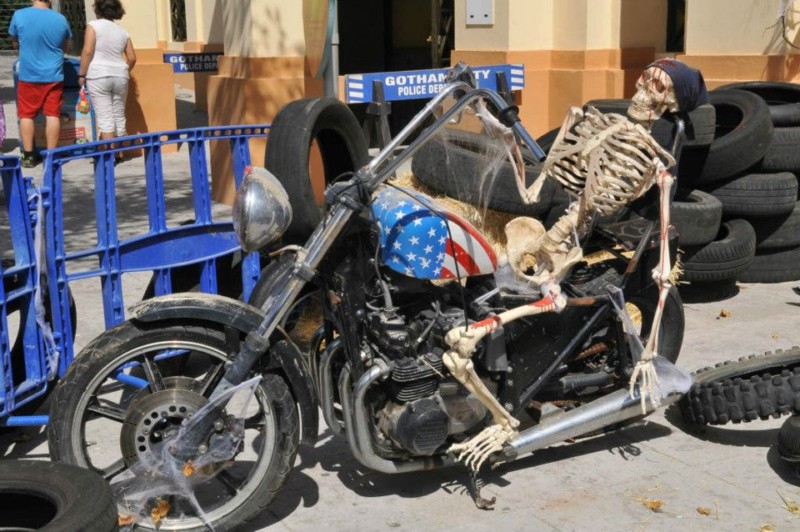 Parque Warner has prepared various events for the whole family to enjoy a fun Halloween party this year! You can delve into the magical and scares of Halloween on an adventure for all ages. At the entrance and throughout the park, pumpkins, corn and ghostly figures will welcome visitors and ask them to take a tour of the most remote and dark corners, inhabited by witches, zombies and ghosts.

If you like horror, the undead and vampires and are wanting you to scream in fear, you are lucky because from October 5 to November 3 they live at Halloween at Parque Warner .  We have 8 new shows for Halloween, and a dinner you can not miss Trick or treat. We’re preparing the park for a living Hollywood movie.

Enjoy, on arrival at the park, a welcome show starring the Warner Bros. animated characters that parade and dance to the rhythm of the best Halloween music. Enjoy the welcome of the most beloved and grab a picture with them after the show.

This terrifying Musical show created exclusively for Parque Warner will make you relive your worst nightmares. A large cast of dancers take us through the underworld, where vampires are about to end humanity. Enjoy the songs marchosas Halloween party and reliving the terror experienced the best songs of this scariest festival of the dead. In addition, many special effects will delight all attendees.

This show has limited capacity, therefore, recommend go to the entrance of the show at least 30 minutes before the start of it and not recommended for children under 10 years.

Discover this new attraction of terror at nightfall, where you can experience extreme terror of the hand of one of the legends of horror movies: Jason Voorhees, the vicious serial murderer who hides behind the gates of Camp Crystal Lake. Relive the most terrifying of the famous saga of Friday the 13th movies and get ready to be scared in this new passage outdoor terror that takes place every night of the Halloween season in Parque Warner.

Do you dare to enter the Camp Blood? It may be that once inside, not get away in time from the hands of the legendary psychopath famous. This attraction is only open when the sun sets and is not recommended for the squeamish, who suffer from claustrophobia or under 13.

The park lake hides a big secret to be unveiled this Halloween finally, this story will be told through pictures and lighting, music, water, and monsters that are responsible for the lake to begin the great parade of fear. Water screen, laser, water fountains and more to the beat of music more terrifyingly fun will be the main references for this multimedia extravaganza that takes place in the lake and in which the main characters are characters the factory horror Warner.

We recall that in order to see this show properly, it should be placed in the palm area of ​​the lagoon, just pull back to the Riddler’s Revenge.

After sweeping the Midwest, the fugitives Wildest Brothers head to the Old West Territory, leaving a trail of destruction in their wake. They have been tried in several states of the Union for almost any crime imaginable, always escaping from the clutches of justice. They usually adorned with skeletons of his victims, is the family brand. FREAK is the largest, and possibly the most violent cannibal. SICK enjoy more with the fear of his victims than anything else in the world. TRICK specializes in hoaxes and scams, which used to bring victims to his brothers. If you see them … Run!

Another year, with fall and winter season, Parque Warner includes within its range of attractions, the new rink. This time it is an indoor ice rink of more than 300 m2 with capacity for 400 people, with own stands where, in the morning, all the public can skate on it, and we then develop shows with characters the factory known Warner.

Dare to skate with your family or friends in this new indoor ice rink will remain open while the weather is inadequate. Remember that it is necessary, par APODER access the ice rink, skates have adequate or hired on rent booths at the entrance of it. The schedule of the same is available in the show program.

We present, for the first time in the history of Parque Warner, the ice show … Halloween! Every day, in the afternoon, in the new indoor ice rink, will run the show for the whole family starring the scariest characters from Warner Bros. The Great Dane Scooby-Doo and the gang of friends star in this show, where they will live an amazing adventure to unlock the mystery of Hotel Nice.

Enjoy with the most entertaining of the factory Warner as Scooby-Doo, Shaggy, Daphne, Wilma and Fred, this new adventure will appeal to both large and small.

Remember, to enjoy this show, suitable for all the family, you need to present at least 30 minutes before the start of the show, as seating is limited.

Every afternoon, in the plaza of Old West Territory, the can-can dancers will go take pictures with attendees and show a little dance. But, when least expected, a horde of undead claims appear and try to attack all these, starting, of course, by the attractive cancaneras.

Discover along with your entire family, the new Halloween haunted maze, made exclusively for all household members. Immerse yourself in this labyrinth walking straw that simulates certain scenes own Halloween theme, as the abandoned cemetery a pumpkin patch and many more, ending in an area where some witches and scarecrows typical tales and stories count Halloween, including the origin of this festival.

The haunted maze is located in the Old West Territory, and open to the public in a special schedule is available upon arrival at the park in the show program.

Enjoy this new puppet show, performed, exclusively, for children of the house. In this show, set in a fantasy forest, all attendees will have fun, watching the story they tell these cute characters.The presentation of the show is provided by Margarita witch, making us an introduction to it, talking about magic potions, spell books and speakers forests.

Enjoy the unique atmosphere of Halloween in Parque Warner . In every corner of our subject areas you can meet the most fun characters (or terrifying, depending on the case). Over 30 different animations passes from the photos with the characters of Warner Bros. most famous (as Batman, the Flintstones or Looney Tunes) to new animations created specifically for the Halloween season as Evil Circus, the boat diabolical family monster in The Freaks, crazy and gravediggers, the girl in the Exorcist, psychos with chainsaws and more.

For the second consecutive year, discover this area of ​​terror outdoors in the Warner Bros. Studios. This year, experience the terror of the hand of terrifying undead which simulates a quarantined area, affected by a life-threatening virus. Gruesome zombies can appear at any time and for any site, therefore, you should not stop you. Meet with the scariest beings and runs when you see on the horizon that are directed towards you. Enjoy the new decoration of the street, where windows and doors have been sealed for safety, and watch out for the gloomy atmosphere at any time could run into one of these horrible creatures lurking in every corner.

This attraction is only open when the sun sets and is not recommended for the squeamish, who suffer from claustrophobia or under 13. For people who do not wish to enjoy this attraction, there has been a diversion alternative is signposted.

To end the scariest day of the year, better than enjoying a massive Halloween parade. The cars of the most famous characters of Warner Bros, a giant spider, a giant pumpkin, a skull, a mortuary full of vampires, hordes of zombies dancing to music, spectra with torches and fire and much more in a parade with more than 50 characters that develops through the main avenues of the park, from the lake area to the square of the park entrance.

Joe Kleimanhttp://wwww.themedreality.com
Raised in San Diego on theme parks, zoos, and IMAX films, InPark's Senior Correspondent Joe Kleiman would expand his childhood loves into two decades as a projectionist and theater director within the giant screen industry. In addition to his work in commercial and museum operations, Joe has volunteered his time to animal husbandry at leading facilities in California and Texas and has played a leading management role for a number of performing arts companies. Joe previously served as News Editor and has remained a contributing author to InPark Magazine since 2011. HIs writing has also appeared in Sound & Communications, LF Examiner, Jim Hill Media, The Planetarian, Behind the Thrills, and MiceChat His blog, ThemedReality.com takes an unconventional look at the attractions industry. Follow on twitter @ThemesRenewed Joe lives in Sacramento, California with his wife, dog, and a ghost.
Share
Facebook
Twitter
Linkedin
Email
Print
WhatsApp
Pinterest
ReddIt
Tumblr
Previous article
ProSlide Wins Leading Edge Award from WWA
Next article
BonBon-Land – Halloween i BonBon-Land