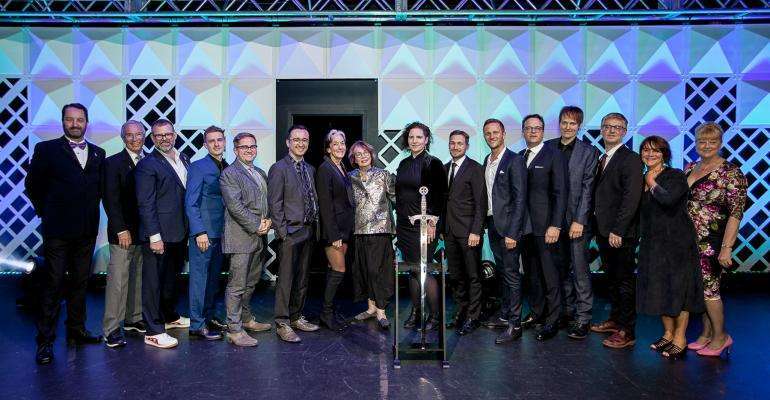 The leading luminaries of the entertainment production industry attended the inaugural Knight of Illumination Awards USA (KOI-USA) on Saturday night in Las Vegas, where the winners were announced at a ceremony and gala dinner.

Three hundred professionals celebrated as 18 lighting and video designers were ‘knighted’ for their creative talent in three categories: Theatre, Live for Broadcast, and Concert Touring & Events. In each category, the winners were chosen by a wholly independent panel of judges, every one an expert in their respective sector.

In addition to the design awards, the Paky Lifetime Recognition Award was also presented. Debuting at KOI-USA, this award is named in fond memory of Pasquale ‘Paky’ Quadri, president and founder of Claypaky. It recognizes an individual who has gone above and beyond to make a huge contribution to the world of lighting and visual design.

On this, the 30th anniversary of the LDI exhibition, the KOI committee unanimously decided to name Patricia MacKay as the recipient of the Paky Lifetime Recognition Award for 2018. As founder of the LDI exhibition and editor and publisher of Theatre Crafts and Lighting Dimensions magazines, the forerunners of Live Design, MacKay was responsible for building the North American entertainment production industry’s leading showcase vehicles. As the founder of ETECH, the industry’s first online news platform, MacKay was also a pioneer of the digital revolution, and has continued her involvement with the industry as a Fellow of the USITT.

Joe Kleimanhttp://wwww.themedreality.com
Raised in San Diego on theme parks, zoos, and IMAX films, InPark's Senior Correspondent Joe Kleiman would expand his childhood loves into two decades as a projectionist and theater director within the giant screen industry. In addition to his work in commercial and museum operations, Joe has volunteered his time to animal husbandry at leading facilities in California and Texas and has played a leading management role for a number of performing arts companies. Joe previously served as News Editor and has remained a contributing author to InPark Magazine since 2011. HIs writing has also appeared in Sound & Communications, LF Examiner, Jim Hill Media, The Planetarian, Behind the Thrills, and MiceChat His blog, ThemedReality.com takes an unconventional look at the attractions industry. Follow on twitter @ThemesRenewed Joe lives in Sacramento, California with his wife, dog, and a ghost.
Share
Facebook
Twitter
Linkedin
Email
Print
WhatsApp
Pinterest
ReddIt
Tumblr
Previous articleDavid Price authors new book on his father Harrison “Buzz” Price
Next articleIAAPA Leadership Conference 2019 to showcase popular UAE attractions