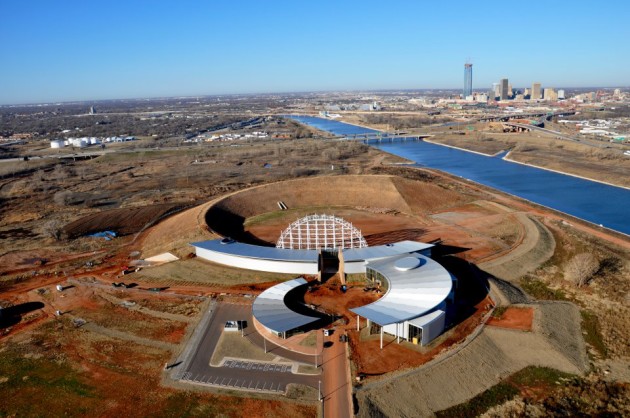 St Louis, MO, USA — As the State of Oklahoma and Oklahoma City negotiate the future of the under-construction American Indian Cultural Center and Museum and its land, the City has retained St. Louis consulting and design firm PGAV to evaluate options for the future of the property.

“We enjoyed working with the City officials and City staff on the Bricktown assignment and are pleased to see the successful development that occurred as a result of that work and the City’s vision,” said John Brancaglione, vice president at PGAV and consulting team lead. “This project presents an array of challenges in assisting the City with the critical decisions it must make, and we’re eager to help the City take on those challenges.”

PGAV serves as a powerful and unique ally in analyzing the future of the property, both in terms of its regional economic influence as well as potential future uses for the facility and grounds. The firm brings five decades of successful experience in economic development strategy for communities around the world and regionally, such as the Missouri DREAM project and the City of Chicago. In addition, PGAV has designed and consulted for hundreds of individual museums, zoos, aquariums, resorts, and theme parks across the globe, such as Space Shuttle Atlantis at the Kennedy Space Center, Table Rock Welcome Center at Niagara Falls, and the Georgia Aquarium.

Over the course of the next three months, PGAV will be meeting with key City officials and evaluating the existing facility and surrounding area to develop specific recommendations relative to the viability of its future commercial development. The team will be analyzing the ability of future development to support required infrastructure and site preparation work, contribute to operations of the Center, and to generate additional capital costs necessary to complete the Center.

PGAV will be developing recommendations that can help the area succeed commercially given either of two potential outcomes: the completion and opening of the fully operational museum and cultural center, or the adaptive reuse of the existing structure and grounds.

“Over the course of our five decades of practice, PGAV has addressed numerous regional economic development opportunities across the country,” said Brancaglione. “In Oklahoma City, we previously helped analyze and recommend strategies for 25 acres of Bricktown located in Downtown.” PGAV has additionally conducted similar studies for Patriot’s Point near Charleston, South Carolina; the Buncombe Tourism Development Authority in Asheville, NC; and St. Johns County in Florida. PGAV has conducted development strategy and economic analysis assignments throughout the country including more than 20 separate locations throughout the City of Chicago and in Australia and New Zealand.

PGAV will be presenting its study and recommendations to Oklahoma City this December.

Joe Kleimanhttp://wwww.themedreality.com
Raised in San Diego on theme parks, zoos, and IMAX films, InPark's Senior Correspondent Joe Kleiman would expand his childhood loves into two decades as a projectionist and theater director within the giant screen industry. In addition to his work in commercial and museum operations, Joe has volunteered his time to animal husbandry at leading facilities in California and Texas and has played a leading management role for a number of performing arts companies. Joe previously served as News Editor and has remained a contributing author to InPark Magazine since 2011. HIs writing has also appeared in Sound & Communications, LF Examiner, Jim Hill Media, The Planetarian, Behind the Thrills, and MiceChat His blog, ThemedReality.com takes an unconventional look at the attractions industry. Follow on twitter @ThemesRenewed Joe lives in Sacramento, California with his wife, dog, and a ghost.
Share
Facebook
Twitter
Linkedin
Email
Print
WhatsApp
Pinterest
ReddIt
Tumblr
Previous articleTEA Announces Arielle Rassel as New Chair of TEA NextGen Committee
Next articleDisney, Evolution Media Partners, and China Media Capital Newest Investors in Jaunt VR