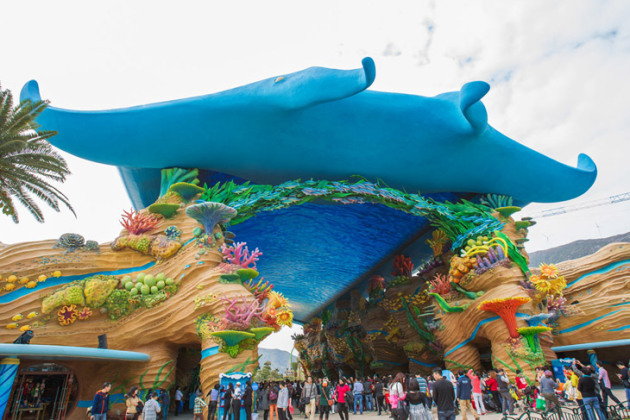 “Chimelong Ocean Kingdom raises the bar for other Chinese park developers and demonstrates how much can be achieved with a combination of Western design and Chinese execution,” said Steve Birket, TEA president. “[The park] is distinguished by its uplifting message of unity and diversity, and its pioneering East-West collaboration.” “Being associated with this Thea Award is special, as it represents success in the new context of China,” says Al Cross, PGAV Destinations VP and project lead. “Our other Thea Awards similarly recognized innovation and boldness – Wild Arctic, Discovery Cove, Georgia Aquarium – and now we have Ocean Kingdom. We are incredibly happy for Chimelong, and we are proud to be part of it.” Ocean Kingdom is home to thousands of animals and boasts numerous rides, attractions, retail, and dining. Numerous other incredible attractions include the massive and immersive digital manta ray entry tunnel; the towering whale shark sculpture at the center of Ocean Park; and a wholly unique attraction which combines a roller coaster and a live polar bear exhibit.

Chimelong Ocean Kingdom serves as PGAV Destination’s first full theme park design in Asia, having previously master-planned and designed the Grand Aquarium at Hong Kong’s Ocean Park and an attraction at the Museum of Qin Terra-cotta Warriors and Horses in Xi’an, China.