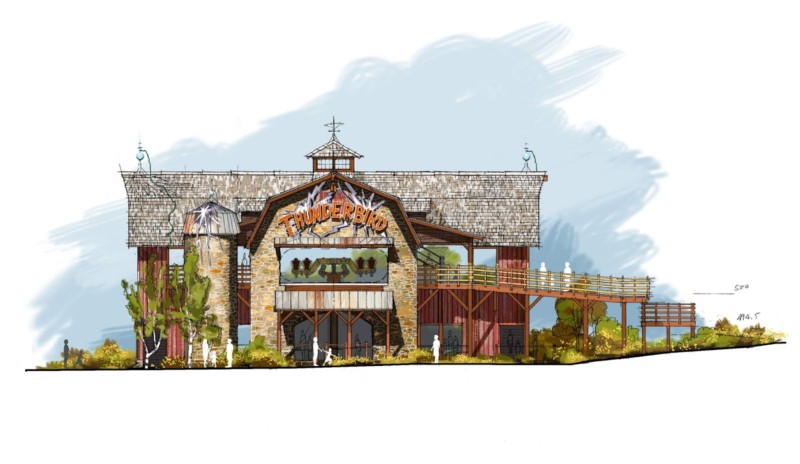 St. Louis, MO,USA (August 19, 2014) – PGAV Destinations is proud to announce that it has developed the buildings, theming, and site development for Holiday World’s newest attraction, Thunderbird, marking the firm’s involvement in a third record-setting, wing-coaster project.After months of secrecy behind the “66 Days At Sea” tease campaign, Thunderbird was at last revealed by Holiday World in late July, 2014. The $22m coaster will be the nation’s first launched wing coaster, accelerating from 0 – 60 m.p.h. in 3.5 seconds, reaching a grand height of 140 feet and lasting 78 seconds. Since opening back in 1946 as the nation’s first theme park, Holiday World is marking its first major steel roller coaster with Thunderbird.

“With the attraction being situated in the Thanksgiving section of Holiday World, we’ve designed Thunderbird’s landscaping and structures to reflect rich, beautiful farmland,” says Ned Diestelkamp, vice president at PGAV Destinations. “The attraction’s main building will be a two-story traditional barn, complete with vertical lap siding, wood shake shingles, and beautiful stonework throughout, exemplified with a massive stone silo.”

“As with many of our designs, Thunderbird started with a rich story about the origin of the ride and facilities,” says Mike Linenbroker, PGAV attraction designer. “We leveraged a number of the principles found in our recent Storytelling publication, and seamlessly wove a tale into every aspect of the experience.”

The weathered and rugged building will show evidence of the Thunderbird’s ever looming presence with gouged claw marks in the walls and burns left from lightning strikes. As riders stand in line, the coaster will actually launch right over them, building the excitement and anticipation of their own heart-pounding adventure. One of the most authentic features will be an antique wagon, which guests will queue around on the lower level of the building. PGAV Destinations’ design tradition is to provide immersive theming for all attraction visitors; so Thunderbird won’t just be fun and beautiful for the riders: it will be thrilling for all nearby park guests as well. As visitors walk around Thunderbird’s exhilarating layout, they’ll be treated to glimpses of the coaster bursting through the tress during some of its most thrilling loops and barrel roles. The vibrant landscaping will echo a thriving farm, full of foliage that reflects hardy crops and flowering plants that will last year-round. The attraction will naturally blend with the Thanksgiving section and the existing forestry with warm hues of browns and oranges, natural materials, and aged farm equipment such as barrels, crates, and wagons.

Two major additional structures populate the attraction including the “Will Power” building and the double fly-through barn. The Power building will serve as the flywheel building and a tribute to the late Holiday World president Will Koch, the visionary leader who began dreaming up the park’s first major steel coaster almost a decade ago. The “double fly through barn” will have the coaster racing through as wood splinters explode in every direction, making an incredibly tight turn, and crashing back again through the barn’s roof and walls.

PGAV Destinations has previously worked with Holiday World as the concept and attraction designer behind three new attractions that opened in spring 2014: a reimagining of Mrs. Klaus’ Kitchen; the brand new Safari Outpost retail outlet in the Splashin’ Safari waterpark; and the new Wildebeestro café, complementing the world’s four-year-running #1 Water Park Ride, Wildebeest.

Joe Kleimanhttp://wwww.themedreality.com
Raised in San Diego on theme parks, zoos, and IMAX films, InPark's Senior Correspondent Joe Kleiman would expand his childhood loves into two decades as a projectionist and theater director within the giant screen industry. In addition to his work in commercial and museum operations, Joe has volunteered his time to animal husbandry at leading facilities in California and Texas and has played a leading management role for a number of performing arts companies. Joe previously served as News Editor and has remained a contributing author to InPark Magazine since 2011. HIs writing has also appeared in Sound & Communications, LF Examiner, Jim Hill Media, The Planetarian, Behind the Thrills, and MiceChat His blog, ThemedReality.com takes an unconventional look at the attractions industry. Follow on twitter @ThemesRenewed Joe lives in Sacramento, California with his wife, dog, and a ghost.
Share
Facebook
Twitter
Linkedin
Email
Print
WhatsApp
Pinterest
ReddIt
Tumblr
Previous articleDavid Aion Joins AES as Director of Business Development
Next articleWanda Group Purchases Two Tower Rides from S&S For Chinese Parks