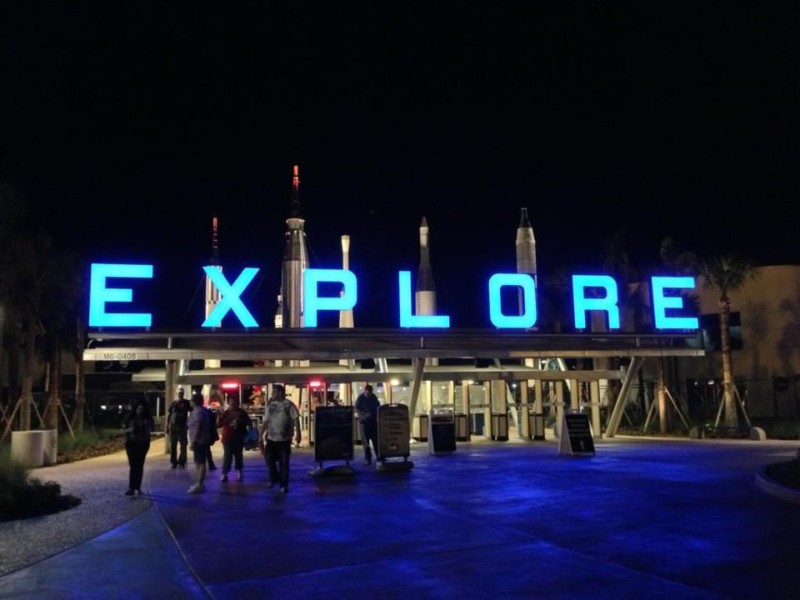 The $16m project is the first phase of a 10-year master plan developed by PGAV Destinations, preceding the opening of the new $100m home for the space shuttle Atlantis later this year.

“The entry experience at any destination is one of the most important moments you have with your guests,” explains PGAV Destinations principal Mike Konzen. “You only have one chance to make a crucial first impression that sets the tone for their entire day.”

Working in tandem with Kennedy Space Center Visitor Complex operators Delaware North Companies Parks & Resorts, PGAV Destinations’ design incorporates numerous thrilling elements into the entry experience. The strongest of which is the complete redirection of foot-traffic entering and exiting Kennedy Space Center: guests are now directed through the Rocket Garden, dwarfed by the towering powerhouses of Titan, Redstone, Atlas, and Saturn 1B rockets that propelled capsules into space. Combined with these brand-new intriguing elements is the theme of “explore,” interwoven throughout the design imagery of the entry experience – melding with Kennedy Space Center Visitor Complex’s over-arching brand. Among many elements is a fountain show themed to a space shuttle launch, an 18-foot glass model of Mars, a pathway constructed of the same Tennessee river rock which the “crawler” moves along to carry rockets from the Vehicle Assembly Building to the launch pad, and an entire themed lay-out that evokes the lift-off of space shuttles.

“From the very outset, every single aspect of our design goal was to be “fitting to the arrival to the world’s greatest space port,” adds PGAV Destinations project lead Emily Howard. “After seeing the reactions by the guests and the Kennedy Space Center Visitor Complex team at its opening, I think we’ve hit that mark.”

Kennedy Space Center Visitor Complex features many attractions and year-round interactive programs, including meeting real astronauts. The standard bus tour, included with admission, explores the history of the Apollo moon and space shuttle programs with panoramic views of Kennedy Space Center, the VAB’s exterior and a stop at the Apollo/Saturn V Center, where visitors see an authentic 363-foot Saturn V moon rocket and relive the historic Apollo missions that saw man land on the moon.

Joe Kleimanhttp://wwww.themedreality.com
Raised in San Diego on theme parks, zoos, and IMAX films, Joe Kleiman would expand his childhood loves into two decades as a projectionist and theater director within the giant screen industry. In addition to his work in commercial and museum operations, Joe has volunteered his time to animal husbandry at leading facilities in California and Texas and has played a leading management role for a number of performing arts companies. Joe has been News Editor and contributing author to InPark Magazine since 2011. HIs writing has also appeared in Sound & Communications, LF Examiner, Jim Hill Media, and MiceChat. His blog, ThemedReality.com takes an unconventional look at the attractions industry. Follow on twitter @ThemesRenewed Joe lives in Sacramento, California with his fiancé, two dogs, and a ghost.
Share
Facebook
Twitter
Linkedin
Email
Print
WhatsApp
Pinterest
ReddIt
Tumblr
Previous articleElectrosonic Announces Promotion of Rob Smith to Sales Manager of Cultural Entertainment and Leisure
Next articleKalahari Resorts Set to Open Third Resort In Pocono Mountains