The worlds of Pixar will get a new home at Disney California Adventure Park when Pixar Pier opens in summer 2018, transforming the area that is now Paradise Pier with the new Incredicoaster, four new imaginative neighborhoods, plus entertainment, themed food and beverage, and merchandise. Guests will experience Pixar stories and characters in new ways on this waterfront pier at the Disneyland Resort.

Pixar Pier, a permanent land along the southern shore of Paradise Bay, will debut during Pixar Fest, a limited-time event that begins April 13, 2018. As a new land, Pixar Pier will introduce the new Incredicoaster plus four neighborhoods where guests step into beloved Pixar stories.

The first neighborhood is inspired by Disney·Pixar’s “The Incredibles” and it will open in summer 2018 with the Incredicoaster. Permanently transformed from the attraction that is now California Screamin’, Incredicoaster will invite guests into a mid-century-modern-style loading area where they board vehicles with a distinctive, new look. New character moments, new scenes and special effects, and a new musical score will connect the attraction’s story to Pixar’s “The Incredibles 2,” which opens in theaters June 14, 2018. 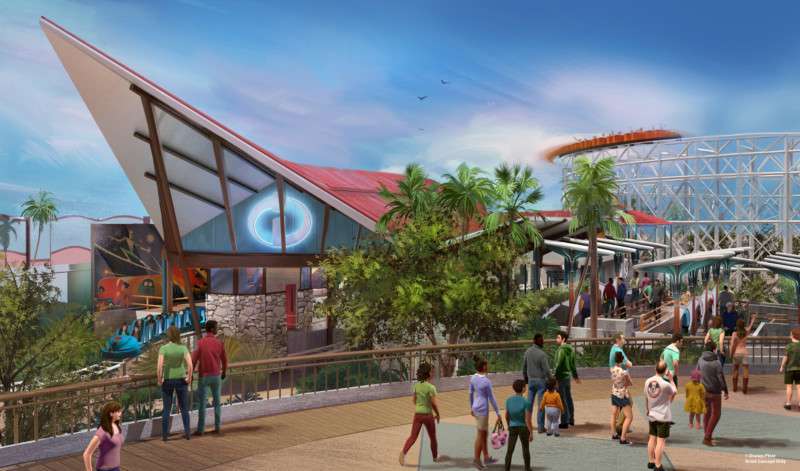 A fourth new neighborhood will celebrate a collection of guest-favorite Pixar stories. Mickey’s Fun Wheel will be themed with a new look and each of the 24 gondolas will showcase a different Pixar character. The iconic face of Mickey Mouse will continue appear on the Paradise Bay side of the wheel. At the Games of the Boardwalk, which currently includes a game called Bullseye Stallion Stampede, guests will find that all the midway games will be inspired by Pixar characters. New games are expected to include characters from “A Bug’s Life,” “La Luna” and “WALL·E.”

To prepare for these big changes, several attractions will close Jan. 8: California Screamin’, Mickey’s Fun Wheel, Games of the Boardwalk and Sideshow Shirts.

The opening of Pixar Pier will add to Pixar Fest, a celebration that begins April 13, 2018. Pixar Fest will include the new fireworks show, “Together Forever – A Pixar Nighttime Spectacular;” the return of “Pixar Play Parade,” appearing for the first time at Disneyland Park; the return of “Paint the Night,” performing this time at Disney California Adventure, and new elements added to each of those parades. In addition, guests will find friends from Disney•Pixar films, creatively themed food and beverage items and merchandise that’s exclusive to Pixar Fest. All of these changes add to the existing attractions and entertainment that feature many favorite Pixar characters and stories at both Disneyland Park and Disney California Adventure.

Joe Kleimanhttp://wwww.themedreality.com
Raised in San Diego on theme parks, zoos, and IMAX films, InPark's Senior Correspondent Joe Kleiman would expand his childhood loves into two decades as a projectionist and theater director within the giant screen industry. In addition to his work in commercial and museum operations, Joe has volunteered his time to animal husbandry at leading facilities in California and Texas and has played a leading management role for a number of performing arts companies. Joe previously served as News Editor and has remained a contributing author to InPark Magazine since 2011. HIs writing has also appeared in Sound & Communications, LF Examiner, Jim Hill Media, The Planetarian, Behind the Thrills, and MiceChat His blog, ThemedReality.com takes an unconventional look at the attractions industry. Follow on twitter @ThemesRenewed Joe lives in Sacramento, California with his wife, dog, and a ghost.
Share
Facebook
Twitter
Linkedin
Email
Print
WhatsApp
Pinterest
ReddIt
Tumblr
Previous article
Ryan Miziker to Produce 24th Annual TEA Thea Awards Gala
Next article
Cedar Fair Reports Record Revenues for Q3 2017