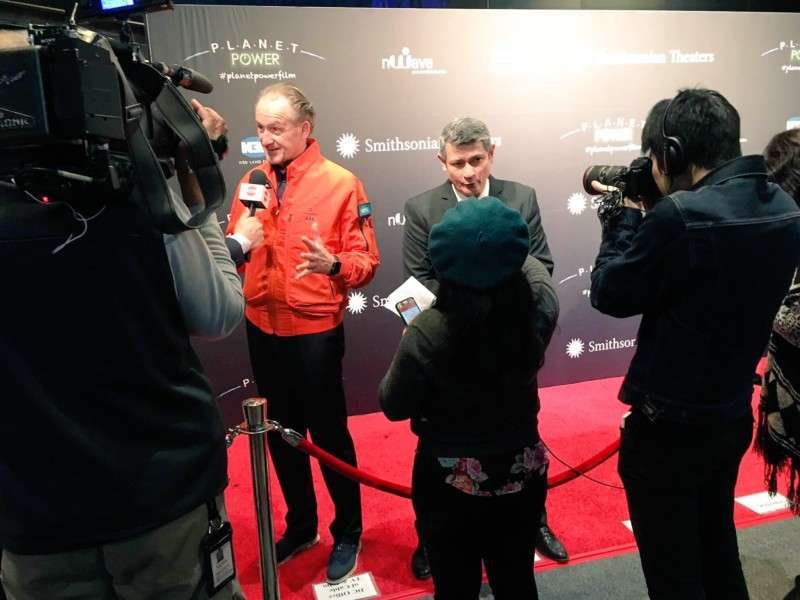 The newest giant screen film from N3D LAND Films and nWave Pictures Distribution, Planet Power, held its world premiere at Smithsonian’s National Air and Space Museum Lockheed Martin IMAX Theater March 22. Exploring the history of electricity, the film looks back at scientists who changed the world, like Faraday, Franklin, Edison, and Tesla. The film also takes a glimpse into the future, following the journey of modern-day adventurers Bertrand Piccard and André Borschberg, the inspirational team behind the record-breaking Solar Impulse, as they pilot the first plane capable of perpetual flight, powered only by the sun.

The film also explores the challenges ahead: how to meet the growing energy needs of our industrialized world while also protecting the health of our planet. By harnessing abundant renewable natural resources and applying innovative new technologies, the next generation of scientists and adventurers are working to create a sustainable and cleaner energy future.

“An IMAX 3D film is an innovative and very entertaining way of storytelling, and I am sure that it is the medium that best matches the importance and greatness of what we are trying to accomplish,” said Bertrand Piccard, Solar Impulse.

“Planet Power weaves a story of science and adventure that we hope inspires and thrills our audiences. With a unique mix of chalk animation, CGI, archival footage and spectacular aerials, and featuring an emotional musical score, the film uses the immersive giant-screen experience to its full advantage”, said Janine Baker, SVP of nWave Pictures Distribution.

Joe Kleimanhttp://wwww.themedreality.com
Raised in San Diego on theme parks, zoos, and IMAX films, InPark's Senior Correspondent Joe Kleiman would expand his childhood loves into two decades as a projectionist and theater director within the giant screen industry. In addition to his work in commercial and museum operations, Joe has volunteered his time to animal husbandry at leading facilities in California and Texas and has played a leading management role for a number of performing arts companies. Joe previously served as News Editor and has remained a contributing author to InPark Magazine since 2011. HIs writing has also appeared in Sound & Communications, LF Examiner, Jim Hill Media, The Planetarian, Behind the Thrills, and MiceChat His blog, ThemedReality.com takes an unconventional look at the attractions industry. Follow on twitter @ThemesRenewed Joe lives in Sacramento, California with his wife, dog, and a ghost.
Share
Facebook
Twitter
Linkedin
Email
Print
WhatsApp
Pinterest
ReddIt
Tumblr
Previous article
UK Seeking National Pavilion Designer for EXPO 2020 Dubai
Next article
Six Flags News: Turner Partnership in China, Batman Backwards in St Louis, VR Drop of Doom in LA