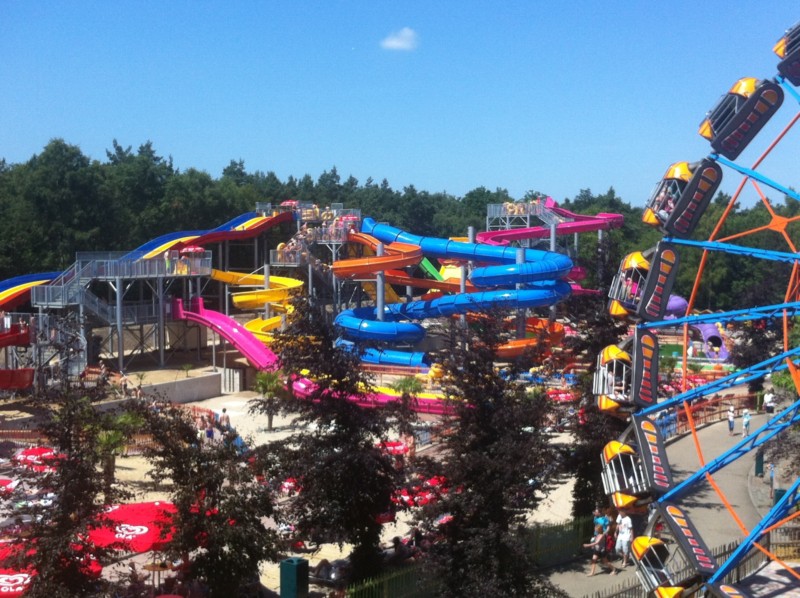 Istanbul, Turkey — Avonturenpark in Hellendoorn, Netherlands, expanded to include the new Aquaventura Slidepark offering a variety of waterslides and aquatic attractions for visitors of all ages. Designed and installed by Polin, Turkey, the new features are part of a more than $4 million (€3 million), 16,404-square-foot (5,000-square-meter) expansion that opened in July 2013.

Avonturenpark is one of several amusement parks owned by Looping Group. Located in the center of Overijssel, the fourth-largest province in the Netherlands, the theme park already offered more than 30 rides and shows before Laurent Bruloy, Looping Group’s CEO, suggested the idea of adding the waterpark components.

After relocating several existing attractions, crews from Polin began installing 11 new waterslides. Polin produced each of the new water slides using the latest resin-transfer molding (RTM) manufacturing technology, which creates a smooth, shiny finish on both interiors and exteriors of a slide’s tubes. One important fact about the park is that all the waterslides end in  dry-out (run-out) sections. There are no splash pools. Some of the new waterslides include: Rafting Slide – Black Hole Combination, Wave Slide, Body Slide, Black Hole, Compact Slide, Wide Slide, Multislide.

Avonturenpark General Manager Lyan van den Bosch explained the importance of offering features that continue to attract tweens and youngsters who visit the park with friends. “Adding the slide park to our existing park simply broadens the current target group,” she said.

Waterparks are a perfect addition, Laurent Bruloy, Looping Group’s CEO, says. After all, the company is always looking for new opportunities to enhance each of its parks’ offerings. “We always have plans for additions to the parks and will definitely keep on investing in them in the coming years,” he said.

Obviously, the addition of the slide park concept has proven that such a forward-thinking attitude pays off. In 2014, this new “slidepark concept” by Looping Group will be open at Isla Magica Park in Spain.

Joe Kleimanhttp://wwww.themedreality.com
Raised in San Diego on theme parks, zoos, and IMAX films, InPark's Senior Correspondent Joe Kleiman would expand his childhood loves into two decades as a projectionist and theater director within the giant screen industry. In addition to his work in commercial and museum operations, Joe has volunteered his time to animal husbandry at leading facilities in California and Texas and has played a leading management role for a number of performing arts companies. Joe previously served as News Editor and has remained a contributing author to InPark Magazine since 2011. HIs writing has also appeared in Sound & Communications, LF Examiner, Jim Hill Media, The Planetarian, Behind the Thrills, and MiceChat His blog, ThemedReality.com takes an unconventional look at the attractions industry. Follow on twitter @ThemesRenewed Joe lives in Sacramento, California with his wife, dog, and a ghost.
Share
Facebook
Twitter
Linkedin
Email
Print
WhatsApp
Pinterest
ReddIt
Tumblr
Previous articleIAAPA Leadership Conference 2014 to Visit Santa Cruz Beach Boardwalk
Next articleGateway Provides Ticketing Access to Panama Canal Visitors