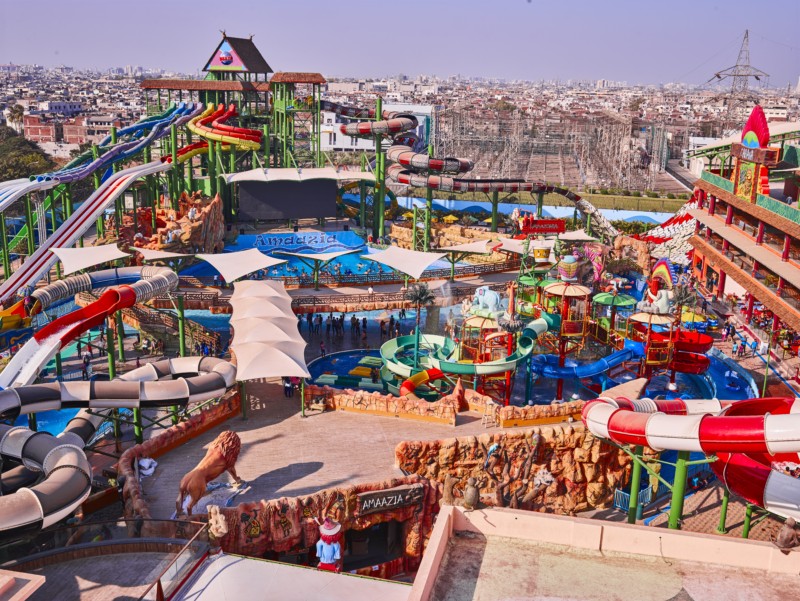 Polin Waterparks‘ King Cobra was among the new waterslides that premiered at the new Amaazia Amusement Park in Surat, India in December 2016.

The waterpark portion of Amaazia, which covers 4.5 acres (nearly 2 hectares) and can accommodate up to 3,000 visitors daily, is the first section of the multi-varied amusement park to open. Along with the first King Cobra, the park also offers the largest wave pool in the region. The second phase of the facility will include a full-scale family entertainment center that caters to people ages 2 to 70. These new sections – which will feature a Bollywood theme – include an indoor amusement park, bird park, snow park, shopping mall, hotel, banquet halls, rooms for weddings and other functions, a three-screen cinema and “7D” theater.

The chief minister of the Gujarat State in India inaugurated the park in December 2016 with a host of other dignitaries in attendance, including the deputy chief minister and popular singer Badshah, who composed and sang Amaazia’s theme song. Sanjay Movalia, executive director of Rajhans Group, and Alpesh Kotadia, executive director of Rajgreen Group, also attended the inauguration.

The new park is owned by the Rajgreen Group of Companies, one of the fastest-growing business conglomerates in India. The park’s development was estimated at US$26,327,500 (€25,000,000). Amaazia will eventually cover 16 acres (6.5 hectares). The facility is being developed by Sanderson Group, an international thematic entertainment design and construction corporation. Sanderson was first set up in Australia and now has its headquarters in Malaysia. The firm is recognized for successfully delivering projects for entertainment giants such as Disney, Universal Studios, DreamWorks, Nickelodeon, Sea World, Ripley’s, Chimelong, Meraas, Village Roadshow and Fox Studios, among many others.

Early visitors to the new waterpark described it as the “best experience of my life,” “world-class” and “awesome.” Special comments singled out the award winning King Cobra waterslide. The other waterslides are all uniquely designed for the park. Most of them are fusion, combination waterslides that offer thrilling ride experience. At the same time, all the waterslides are RTM manufactuıred and feature natural lights and special patterns. Polin waterpark rides at Amaazia include:

King Cobra. Guests can ride either singly or with another person as they race through a circular path of twists, turns and surprises. The heart-pounding ride gives guests an extra surge of excitement as they shoot up a nearly vertical slope before sliding backwards, several times, before exiting the ride.

Looping Rocket. This attraction features a unique “launch capsule” 73 feet in the air with a trap door that opens to send riders through a high-speed, horizontal and literally heart-pounding 360-degree loop.

Freefall and Body Slide Combo Waterslide. The Freefall section of this attraction offers an exhilarating drop for guests who want to experience the thrill of a freefall without the danger. Connected to it is an open slide that ensures a safe, smooth ride requiring no mats with a wide variety of design options and slide paths.

Twister Racer and Windigo Combo. The Twister Racer is a four-lane multi slide that blends speed with twisting turns as multiple tubes intertwine to create a thrill-slide experience. Merged into its design is Polin’s Windigo, a sophisticated thrill ride that sends guests through side-by-side enclosed tubes that spread out to create geometrical curving patterns high above the ground.

Black Hole. This attraction is a part-open/part-closed slide in which guests enjoy the full effects of Polin’s Natural Light Effects technology, which creates a visual feast for guests. The visual experience is created by water sluicing through the tubes and interacting with sunlight.

Uphill Navigatour and Blackhole Combo. Guests sliding along the Navigatour’s breathtaking 135-meter (443-feet) path slip in and out of the light as they experience an amazing light show. In the Blackhole portion of the ride, guests continue along a path offast-changing colors and designs in a high-speed trip through multiple turns and inclines.

Black Hole & Turbolance Combo. The ride starts slowly in the Black Hole section of this fused slide but quickly picks up velocity to deliver a high-speed adventure before connecting to Polin’s Turbo Lance extreme slide. On this section of the ride, guests experience a steep drop that propels them steeply up a giant vertical slide before they are rushed backwards down the slope, flying over a hill and ending in a splash pool.

Space Boat. One of Polin’s most popular extreme slides, the Space Boat combines the excitement of the Space Hole and the Black Hole. Guests begin the ride via the Black Hole’s high-speed,enclosed tube slide, slipping into a swirling vortex of multiple turns and inclines, including dizzying changes in lighting and colors. They are discharged into a huge, open bowl where centrifugal force whirls them around the insides until they drop through the center and experience a breathtaking splash below.

Kubilay Alpdogan, Director of Sales & Design of Polin Waterparks, says that working with such esteemed leaders in the entertainment industry enables Polin Waterparks to put new clients at ease, knowing they are in partnership with the world’s best. “Being able to work alongside firms such as the Rajgreen Group and Sanderson is another feather in our cap, and these parternships help us raise the bar for the entire amusement industry.”

Joe Kleimanhttp://wwww.themedreality.com
Raised in San Diego on theme parks, zoos, and IMAX films, InPark's Senior Correspondent Joe Kleiman would expand his childhood loves into two decades as a projectionist and theater director within the giant screen industry. In addition to his work in commercial and museum operations, Joe has volunteered his time to animal husbandry at leading facilities in California and Texas and has played a leading management role for a number of performing arts companies. Joe previously served as News Editor and has remained a contributing author to InPark Magazine since 2011. HIs writing has also appeared in Sound & Communications, LF Examiner, Jim Hill Media, The Planetarian, Behind the Thrills, and MiceChat His blog, ThemedReality.com takes an unconventional look at the attractions industry. Follow on twitter @ThemesRenewed Joe lives in Sacramento, California with his wife, dog, and a ghost.
Share
Facebook
Twitter
Linkedin
Email
Print
WhatsApp
Pinterest
ReddIt
Tumblr
Previous articlePixar and VR Pioneers to Keynote at InfoComm 2017’s TIDE Conference
Next articleMain Street Design Provides Interpretive Planning & Design for Florida: Mission Everglades at Zoo Miami