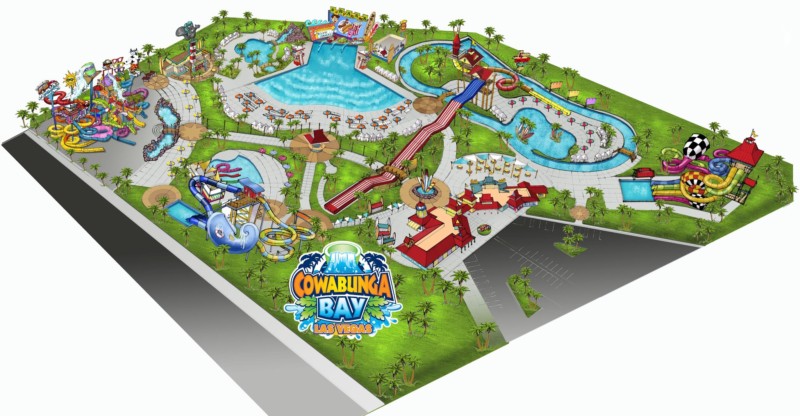 Istanbul, Turkey (April 15, 2014) – Construction issues may have delayed the opening of Las Vegas’ newest waterpark. But when Cowabunga Bay opens early this summer, guests will get to experience a ride never before offered anywhere else in the world. 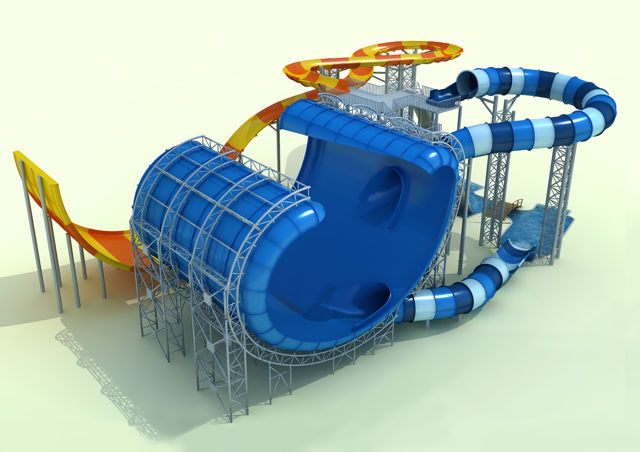 Among its many attractions will be the world’s first Surf Safari waterslide. Cowabunga Bay is marketing the ride under the name Wild Surf. Polin designed and created the attraction exclusively for Cowabunga Bay. The giant slide features a four-person raft that begins with a long, rushing trip through the dark followed by a dizzying 55-foot drop into the world’s largest manmade parabolic “wave.” Riders twist and turn along the ride’s path, speeding through unexpected changes in momentum until they shoot through the wave’s crest, get drenched by a water shower spilling from the lip of the wave and slide from side to side, forwards and backwards, before splashing into the pool below.

Shane Huish, one of the original investors in Cowabunga Bay who is now the park’s general manager, is also general manager of the Cowabunga Bay Water Park in Draper, Utah. His family runs three family fun centers, two in suburban Seattle and one near Portland, Ore. He says he was excited about the Surf Safari’s unique slide path, plus the fact that the attraction gives guests a longer riding experience compared to slides with similar features.

“It offers a creative twist to a ride that already offers lots of great heart-pounding excitement,” he said. “Plus, it presents an added thrill to guests waiting in line at the top of the slide tower. From their vantage point, they get a bird’s-eye view of what’s in store as they look down into the funnel and see the riders zipping around inside.”

Originally, Cowabunga Bay’s owners planned to open the park on Memorial Day 2013. But soon after the $23 million park’s December 2012 ribbon-cutting, crews digging into the site hit a layer of caliche. This naturally occurring sedimentary rock is similar to concrete, and its presence slowed construction as workers labored to dig through the hardened material. To complicate matters, the delivery of critical steel-support structures for the slides was delayed.

As management looked at the construction schedule, it became clear that they would be unable to open until late in the summer at the earliest. Thus, rather than maintaining the original fast-paced construction plan, only to be open for a short time before having to close for the season, those in charge decided to postpone the park’s inauguration until the following year.

While the park also underwent changes in ownership that August, those issues never impacted the park’s planned opening for summer 2014. 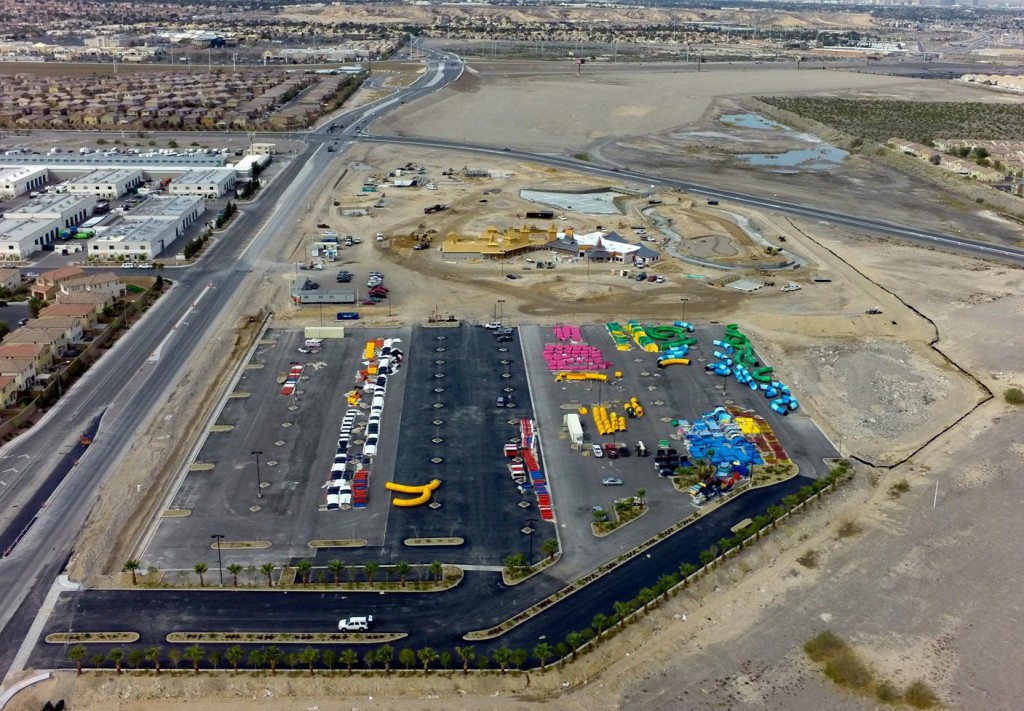 Segmented into three areas, the 23-acre site near Galleria Drive and Gibson Road in the city of Henderson will include:

–Aloha Shores, a Hawaiian-themed family-friendly area that includes the Cowabunga Kids Cove, a large play area for kids. The kids’ area will feature a giant, heated shallow pool with 10 mini waterslides, waterfalls, tipping buckets and the Guppy Racer, a scaled-down version of the park’s giant racer slide. The area is accessed via one controlled entrance and exit and will feature seating, shade and rental cabanas for adults.

–The Boardwalk, which pays tribute to Atlantic City and the Jersey Shore.

The park, which is being master-planned and plumbed for future expansion, will feature dozens of other rides and attractions in addition to the Wild Surf. The attractions include:

–Surf-a-Rama Wave Pool.Set amidst a 1950’s drive-in theater, this 35,000-square-foot wave pool-one of the largest in Nevada and the centerpiece of the park-will rock heated water into waves up to 4 feet high. Little ones can splash and play as waves break on the beach.

–Zuma ZOOMa. Designed for thrill seekers, this slide (Polin’s Looping Rocket) the park’s tallest attraction features a unique “launch capsule” 73 feet in the air with a trap door on which riders stand. When the door drops open, riders are sent on a thrilling adventure via a high-speed horizontal 360-degree loop.

–Surfin’ USA. This one-of-a-kind racing slide (Polin’s Uphil multisurf)- allows six guests at a time to plunge face-first downhill from the 55 foot start point, then it’s up and over a unique speed bump finale.

–Beach Blanket Banzai. This giant raft slide (Polin’s Family Rafting) allows up to four family members and friends to ride together down 600 feet of twist, turns and drops before a gushing finale.

–Rock-a-Hoola.Riders brave a 300-foot-long slide (Polin’sSpace Boat) before entering a giant bowl and whirling around for several revolutions before a thrilling splashdown.

–Surf-A-Go-Go. This 600-foot-long slide (Polin’s Space Shuttle) features two giant “rebound chambers” that cause rider’s to climb the walls and rebound from side to side.

–Boardwalk Bay. Relaxation rules in this care-free pool. Guests will splash in playful fountains or just enjoy the sun as they float their cares away. 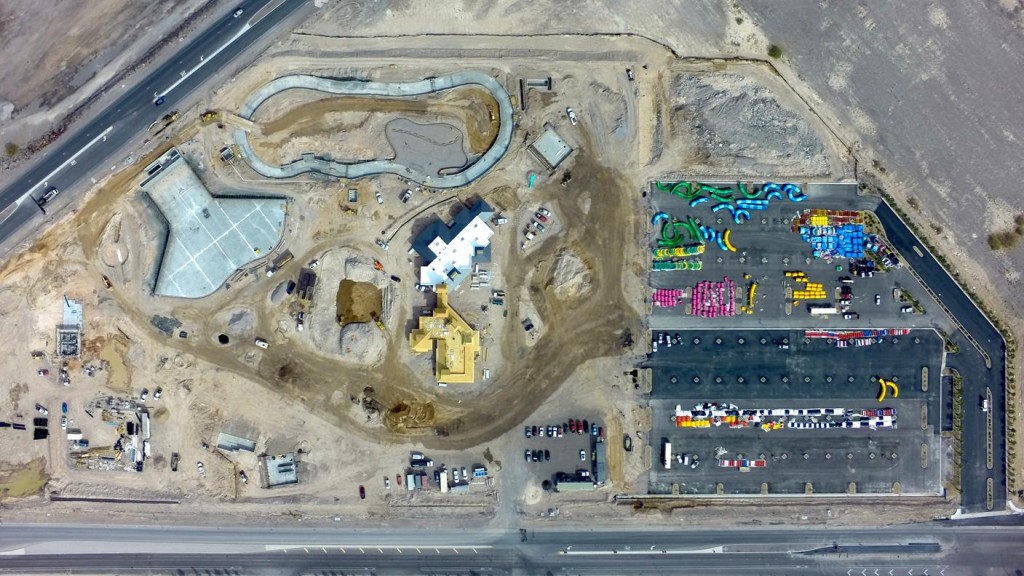 General Manager Huish said that an ongoing issue he had faced at the original Cowabunga Bay waterpark in Utah was oxidation of the slides’ finishes. So when he saw the patented Magic Shine finish that Polin adds to all of its slides, he was immediately convinced he had found the right aquatics design firm with which to partner on the Nevada project.

Polin creates the finish, which is smooth and shiny on both sides of each waterslide component, using resin transfer molding (RTM) technology, which is a specialized and the latest composites production technique using closed-molded technology. The important thing is that it is not only about the look, the RTM manufactured waterslides are also physically superior waterslides.

Joe Kleimanhttp://wwww.themedreality.com
Raised in San Diego on theme parks, zoos, and IMAX films, Joe Kleiman would expand his childhood loves into two decades as a projectionist and theater director within the giant screen industry. In addition to his work in commercial and museum operations, Joe has volunteered his time to animal husbandry at leading facilities in California and Texas and has played a leading management role for a number of performing arts companies. Joe has been News Editor and contributing author to InPark Magazine since 2011. HIs writing has also appeared in Sound & Communications, LF Examiner, Jim Hill Media, and MiceChat. His blog, ThemedReality.com takes an unconventional look at the attractions industry. Follow on twitter @ThemesRenewed Joe lives in Sacramento, California with his fiancé, two dogs, and a ghost.
Share
Facebook
Twitter
Linkedin
Email
Print
WhatsApp
Pinterest
ReddIt
Tumblr
Previous articleAttractions Based On Fox’s “Ice Age” Franchise Headed to Indonesian Theme Park
Next articleVIDEO: Behind the Scenes of New Ratatouille Trackless Dark Ride at Disneyland Paris