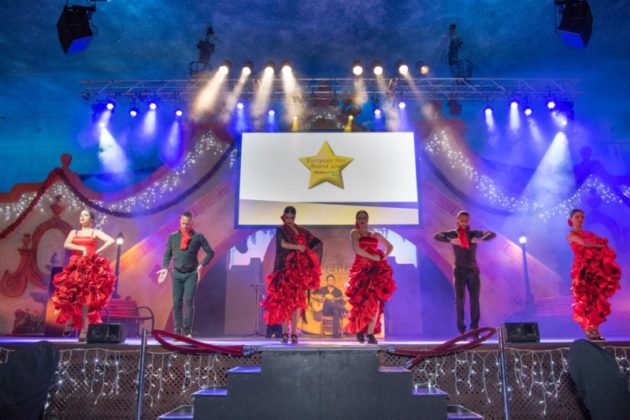 Dilovasi, Turkey  — For the fifth year in a row, Polin Waterparks has been honored with multiple European Star Awards in the category of “Europe’s Best Waterslides.” Polin Waterparks received this recognition at this year’s Euro Attractions Show (EAS) during a special ceremony on Sept. 19, 2016, at PortAventura World in Barcelona, Spain. The event took place the evening before EAS – the largest attractions exhibition in the European amusement industry – officially kicked off on Sept. 20.

Park operators and manufacturers were awarded their prizes personally after an independent, international trade jury voted for and ranked the most remarkable attractions, waterslides, roller coasters and theme parks in Europe.

“We’re as proud today as the very first time we won a European Star Award,” she adds. “We take these awards very seriously, because they are official recognition of our dedication to delivering innovative, game-changing attractions. We will continue to focus on designing the most creative waterslides that pique customers’ interests and ensure we maintain the trust of our partner parks. And we will never stop innovating, because people’s interests will never stop evolving. So we will continue to evolve, too.

“Of course,” she continues, “We couldn’t achieve these honors without the dedicated, collaborative efforts of our partner parks. They provide the insight and inspiration for all we do. So we’re very grateful for their trust in us. That’s ultimately our highest award,” she explains, “that our clients continue to choose us repeatedly. So we send our congratulations to all of them, as well as to all of the other winners!”

Awarded since the beginning

Each year since its inception, the European Star Awards has honored Polin Waterparks 12 times.

The first year the European Star Awards were announced, in 2012, Polin won First Place in the category of “Europe’s Best Waterslides” for its King Cobra attraction at Aqualand Frejus in France. Since then, Polin has continued to rack up wins in the annual competition, which is hosted by Kirmes & Park Revue magazine.

While several Polin waterslides have been honored over these five years, the ride that continues to gain accolades at the annual award ceremony is Polin’s King Cobra waterslide. King Cobra stands out for four primary reasons:

① Unique appearance. It is the first and the only waterslide in the World that has its own fiberglass theme built in itself. While many parks customize their King Cobra to match their themes, others continue to install the ride with its original design: bold red, black and white scales with a ferocious cobra head that reaches an imposing height of 50 feet (15.24 meters).

② Thrilling riding experience. King Cobra’s configuration enables two double tubes (4 riders) to race along a circular path filled with twists and turns, catapulting them through open and closed tubes before they confront a heart-pounding plunge nearly 25 feet (8 meters) and accelerate up to 32 mph (51 km/h).

③ Resin transfer molding (RTM) manufacturing. The ride – like all of Polin’s waterslides- is made viaRTM, a latest composites manufacturing technique that creates slide components that are smooth and shiny on both sides with zero rough edges and perfect component alignment.

④ Special effects. The ride itself is enough to become addictive for many guests. But when parks add Polin’s unique extra effects – such as fog, sound and lighting – the ride’s thrills are magnified.

The parks at which Polin’s King Cobra was recognized for 2016 were:

Aqua Fantasy, Turkey, Sixth Place in “Europe’s Best Water Slides” for the “Super Combo” Waterslide. (Aqua Fantasy has the special honor of launching one of Polin’s newest signature attractions: its first Sphere, another innovative product that is gaining growing popularity. Aqua Fantasy is considered one of the most prominent waterparks in Turkey.)

Previous European Star Award honors that Polin has received include:

King Cobra,First Place in “Europe’s Best Waterslide.” (This was the third time in four years that King Cobra earned this top distinction.)

Istralandia, Croatia, Fifth Place in “Europe’s Best Water Parks.” (Istralandia was the first waterpark ever built in Croatia and recently expanded with the addition of two new waterslides from Polin this year.)

Riviera Aquapark at Maxx Royal Resort, Turkey, Tenth Place in “Europe’s Best Water Parks.”(Maxx Royal Resort is one of the most prestigious waterparks resorts in Turkey.)

Joe Kleimanhttp://wwww.themedreality.com
Raised in San Diego on theme parks, zoos, and IMAX films, InPark's Senior Correspondent Joe Kleiman would expand his childhood loves into two decades as a projectionist and theater director within the giant screen industry. In addition to his work in commercial and museum operations, Joe has volunteered his time to animal husbandry at leading facilities in California and Texas and has played a leading management role for a number of performing arts companies. Joe previously served as News Editor and has remained a contributing author to InPark Magazine since 2011. HIs writing has also appeared in Sound & Communications, LF Examiner, Jim Hill Media, The Planetarian, Behind the Thrills, and MiceChat His blog, ThemedReality.com takes an unconventional look at the attractions industry. Follow on twitter @ThemesRenewed Joe lives in Sacramento, California with his wife, dog, and a ghost.
Share
Facebook
Twitter
Linkedin
Email
Print
WhatsApp
Pinterest
ReddIt
Tumblr
Previous articleCedar Fair Closes FEARVR Virtual Reality Horror Experiences at Three Parks
Next articleDeborah Eicher Joins Scruffy Dog as Commercial Director