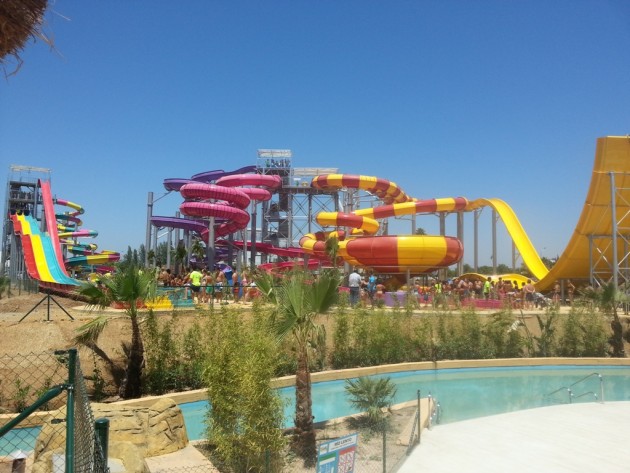 Istanbul, Turkey (August 29, 2014) — Looping Group, a growing company with headquarters in Merlimont, France, is closely examining what features its parks will require to keep guests consistently returning year after year. And, like the most successful parks around the world-but particularly in Europe right now-that answer involves the expansion or addition of a waterpark.

The management team at Looping Group, which owns nine leisure parks in Europe, explains its plan as “combining an organic and dynamic external-growth strategy.” Its goal is to become one of the leading European management groups in the regional parks sector. 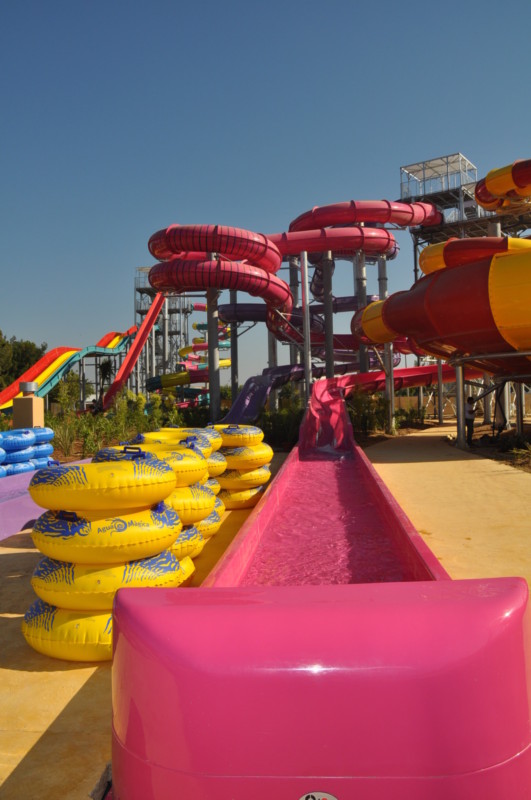 Recently, Looping Group proved its commitment to that strategy when-for the second straight year-it inaugurated a new waterpark addition to one of its facilities, this time at Isla Magica in Seville, Spain.

The Looping Group kickstarted is focus on aquatic attractions last year when it expanded its Avonturenpark in Hellendoorn, Netherlands, to include the new Aquaventura Slidepark. Designed and installed by Polin Waterparks, the new waterpark features were part of a more than $4 million (€3 million), 16,404-square-foot (5,000-square-meter) expansion of the facility. 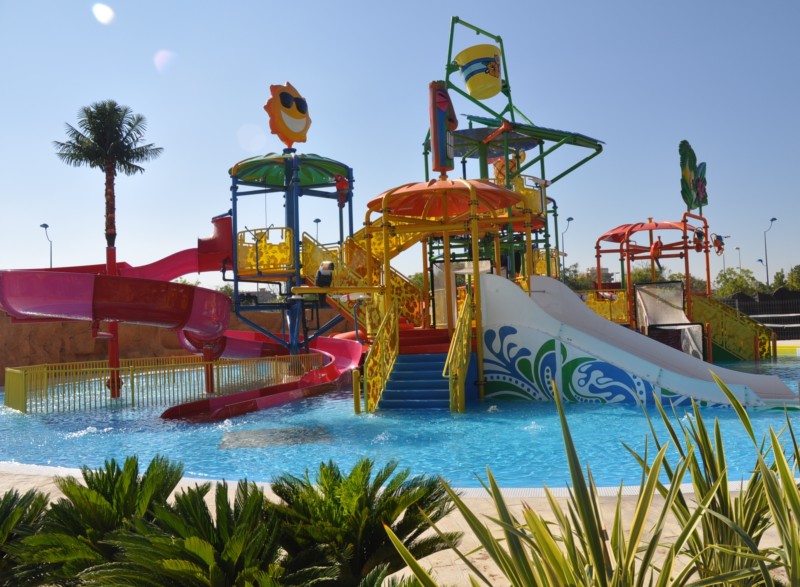 This year, the Looping Group again partnered with Polin for its $6.5 million (€5 million) expansion of Isla Magica, a facility of which it gained ownership in 2013. Open since 1997, the theme park – which is divided into seven different themes that represent various eras in Spanish history during the 16th century – offers comedy theaters; live entertainment with water, lasers, fire and music; sail-boat rides; and two-story carousels. At the time Looping Group took over, however, the park was in danger of closing. The Looping Group determined that it could revitalize the themepark by adapting some new management techniques, controlling the budget more closely and, most importantly, introducing an innovative waterpark to regain guests’ interest.

This time, however, CEO Laurent Bruloy decided he wanted to do more than add standard water slides. At the new Aqua Magica waterpark, Bruloy chose to install several of Polin’s signature rides. 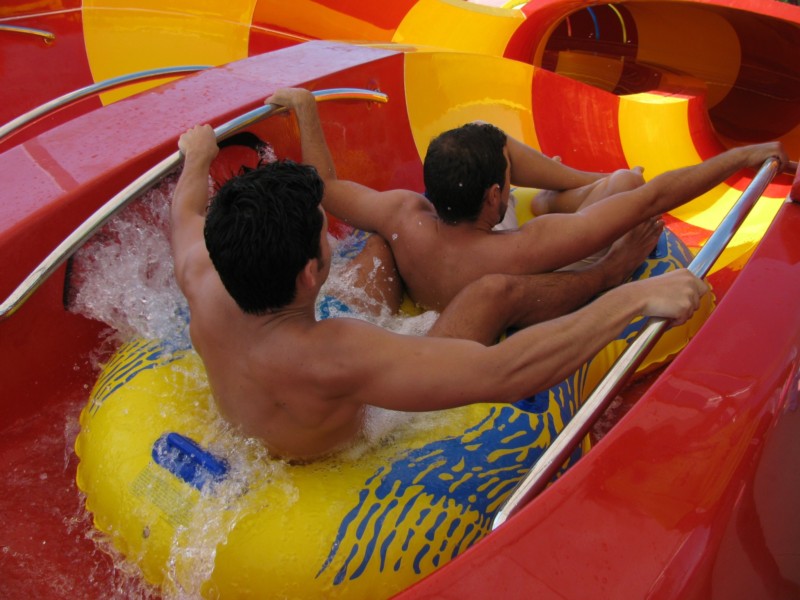 “We wanted to invest in attractions that would not only excite local residents and entice them to come back many times over the summer season,” Bruloy says, “but that would also intrigue visitors from outside the area. We know that these waterslides will help build guest loyalty because they are unique and thrilling. Plus, we’ll provide an actual beach experience with our wave pool in an area of Span that is far from the coast.

“In essence,” he added, “we’re offering an experience that can’t be found anywhere else in Seville.”

Aqua Magica features a select group of slides designed to let guests challenge one another and themselves by upping the adrenaline factor. All of the slides feature Polin’s exclusive resin-transfer molding (RTM) manufacturing technology, which makes the slides appealing not only to the riders but also to guests on the ground because both the interior and exterior of the tubes are smooth and shiny. Additioanlly, the RTM manufactured slides are also physcilally superior. 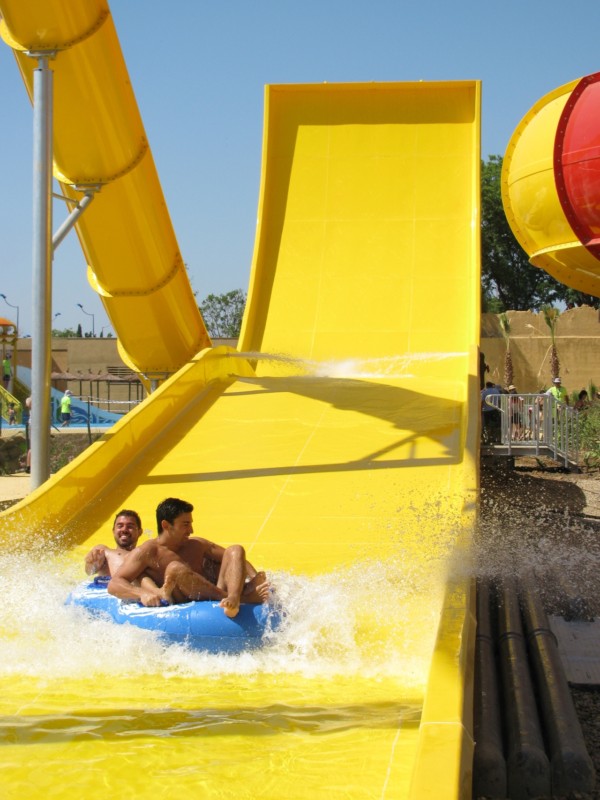 “If you give guests slides and other water rides that offer real thrills and excitement – adrenaline-pumping experiences that they can’t get anywhere else – then it’s definitely possible to keep them coming back again and again,” Cruz explains. “And that allows even a short season to be extremely profitable. Plus, waterslides and water play structure are appealing to families who might not otherwise be interested in the ‘typical’ theme park experience,” he adds. “After all, a waterpark allows guests to spend much more time together than most theme parks. They can ride many of the slides as a group. They can splash together in the wave pool or float along in the leisure river. And they can let little ones entertain themselves with the interactive gadgets and gizmos of the kids’ water playground.

“Those are experiences you just can’t get at a dry theme park,” he adds. 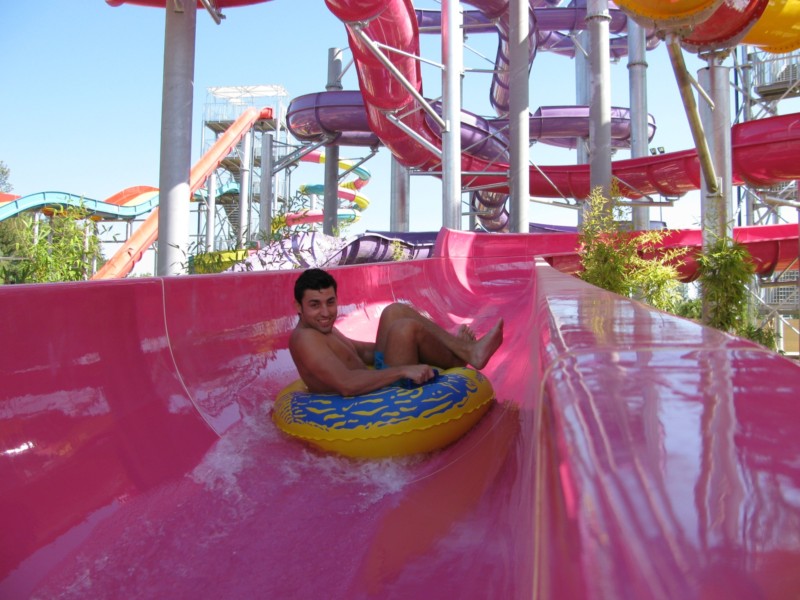 Looping Group’s understanding of the benefits that waterpark add to a traditional theme park comes from the expertise provided by several key members of the firm’s management team. Pierre Cathala and Arnaud Coste formerly managed other well known waterparks.

Their knowledge has come in handy since the waterpark had its inauguration on July 3 and opened to the public on July 10. The park – more than 215,000 square feet (20,000 square meters) in size – has been busy; it can accommodate about 4,000 people daily. (The main park typically sees about 600,000 visitors annually.) And crowds have been steady.

Management doesn’t expect those numbers to change until the waterpark closes for the season in late September. Nor does Looping Group expect to slow its expansion plans when it comes to adding new waterparks, slide parks as they call at its other properties. After all, next summer is just around the corner.

Joe Kleimanhttp://wwww.themedreality.com
Raised in San Diego on theme parks, zoos, and IMAX films, Joe Kleiman would expand his childhood loves into two decades as a projectionist and theater director within the giant screen industry. In addition to his work in commercial and museum operations, Joe has volunteered his time to animal husbandry at leading facilities in California and Texas and has played a leading management role for a number of performing arts companies. Joe has been News Editor and contributing author to InPark Magazine since 2011. HIs writing has also appeared in Sound & Communications, LF Examiner, Jim Hill Media, and MiceChat. His blog, ThemedReality.com takes an unconventional look at the attractions industry. Follow on twitter @ThemesRenewed Joe lives in Sacramento, California with his fiancé, two dogs, and a ghost.
Share
Facebook
Twitter
Linkedin
Email
Print
WhatsApp
Pinterest
ReddIt
Tumblr
Previous articleIAAPA’s Euro Attractions Show to Feature Largest Exhibition Floor and Most Exhibitors in Show History
Next articleCedar Point’s Mantis Stand-Up Coaster Prepares to Creep Away Into the Sunset