Polin Waterparks and Legends of Aqua Waterpark at The Land of Legends Theme Park were honored to receive the Leading Edge Award earlier this week during the World Waterpark Association (WWA) Symposium & Trade Show.

Presented by WWA Chairman of the Board Steve Miklosi during the show’s General Session at the Palm Beach County Convention Center in West Palm Beach, FL., on October 17th, 2017, the award was in “recognition of a park and supplier member who, through their combined efforts, have brought a project, product, service or program to fruition, thereby creating industry innovation and leadership.”

Polin’s partner in receiving the award, the Land of Legends Theme Park in Antalya, Turkey, is the first Turkish theme park – and first in the EMEA (Europe, Middle East and Africa) region of the world – to ever be honored with a Leading Edge Award. The Land of Legends features a long and varied list of attractions – from a five-star hotel to a dolphinarium, a wildlife park, a theme park and its Legend of Aqua Waterpark that sets the park apart. 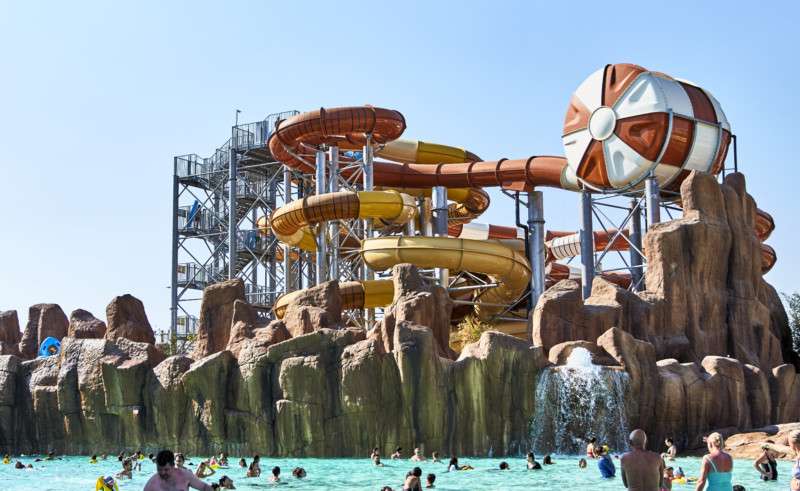 Sohret Pakis, the Director of Marketing and Communications for Polin Waterparks, says her company considers the project to be a highpoint among its achievements in 2016. “It’s truly our ‘project of the year,” she says. “The waterpark part of the project was a huge and truly unique project and one of which we are immensely proud both in terms of design and experience and also in terms of the wide variety of waterpark attractions. We truly congratulate this amazing park with full heart. This award is so well deserved for the Land of Legends.”

Pinar Pehlivan, Marketing Director of The Land of Legends, accepted the award at the ceremony alongside Sohret Pakis, Polin’s Director of Marketing & Communications and Kubilay Alpdogan, Director of Sales and Design. She added: “It is a humbling experience to be considered among the best when so many other outstanding companies and projects also were being recognized. I would like to congratulate all winners.” she said. “The honor is especially rewarding considering that the Land of Legends is new and is already planning to expand. The Land of Legends is adding a new hyper coaster set to open May 2018.”

Joe Kleimanhttp://wwww.themedreality.com
Raised in San Diego on theme parks, zoos, and IMAX films, InPark's Senior Correspondent Joe Kleiman would expand his childhood loves into two decades as a projectionist and theater director within the giant screen industry. In addition to his work in commercial and museum operations, Joe has volunteered his time to animal husbandry at leading facilities in California and Texas and has played a leading management role for a number of performing arts companies. Joe previously served as News Editor and has remained a contributing author to InPark Magazine since 2011. HIs writing has also appeared in Sound & Communications, LF Examiner, Jim Hill Media, The Planetarian, Behind the Thrills, and MiceChat His blog, ThemedReality.com takes an unconventional look at the attractions industry. Follow on twitter @ThemesRenewed Joe lives in Sacramento, California with his wife, dog, and a ghost.
Share
Facebook
Twitter
Linkedin
Email
Print
WhatsApp
Pinterest
ReddIt
Tumblr
Previous article
ADG’s Twin Tides Dual Entry Wave Pool Earns Leading Edge Award While CEO Is Inducted Into WWA Hall of Fame
Next article
SimEx-Iwerks Builds the Ultimate Treehouse for Bronx Zoo