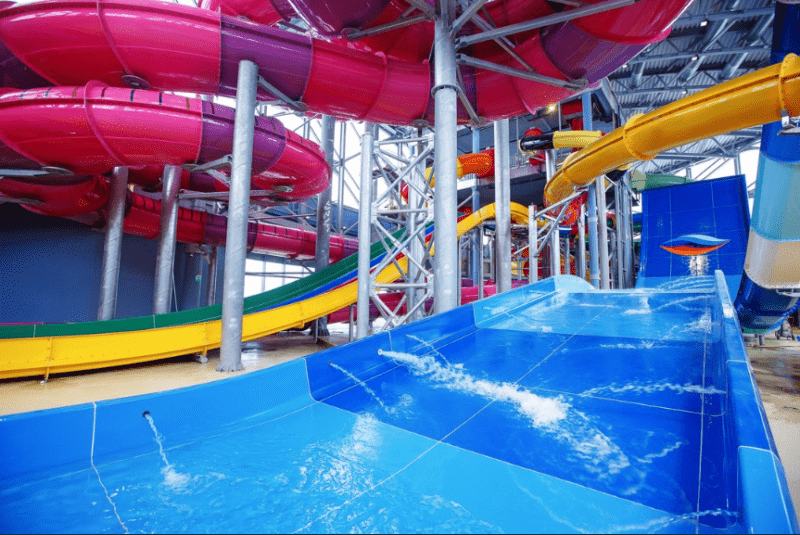 The growing waterpark industry in Russia led Polin Waterparks (Turkey) to open an office in the country several years ago specifically to manage the development of these facilities and serve the waterpark industry in the region the best way possible. Polin Waterparks’ latest Project, Leto Leto Aqua Park which is the largest water park in Russia in Tyumen city was completed after 3 years of work. Polin has worked with local investment group Sibentel Holding on the facility.

On June 7, in the regional center, the Leto Leto aqua park hosted several hundred people within the framework of the technical opening. Officially, the work of the entertainment complex started on June 8. The launch of the complex was attended personally by the provincial governor of the region.

Before pressing the start button of the water park, Alexander Moore inspected the entertainment complex built by the holding company Sibintel. Together with Moore, the speaker of the regional Duma Sergey Korepanov, Senator Stepan Kirichuk, ex-Governor of Yamal Yuriy Neelov, other deputies and officials, including the four deputy governors of the Tyumen region, took a walk in the water park.

In the water park, there are dozens of water attractions and the air temperature is about 28-29 degrees. The total length of all the water slides is over 1 km and the height of the most extreme of them reaches 21 meters. There is also an enormous wave pool of 750 m2 with four programmable modes, a 570 m3 Lazy River with 3 km per hour flow speed and one of the biggest kids zone in Russia of total area 1300 m2 , a large children’s area and a bistro. The waterpark can host up to 2500 guests daily . Nearby is a four-star hotel with a gourmet restaurant. Both the hotel and the water park are fully adapted for people with disabilities.

Among the 10+ waterslides completed for the more than 10,000-square-meter (107,000-square-feet) facility are three of Polin Waterparks’ most popular: Turbolance, Windigo and Magic Hole.

During the opening ceremony of the first stage of the water park, the acting governor of the Tyumen region Alexander Moore noted that the water park “Leto Leto” is a very beautiful and necessary facility for Tyumen and the region.

“I am sure that it will become one of the most favorite places for family recreation for Tyumen citizens and guests of the regional capital, will turn into a point of attraction for tourists from other regions of the country. The government of the Tyumen region creates comfortable conditions for investors in all areas of our economy. The creation of an aqua park is yet another confirmation of the correctness of such a strategy, “Moore concluded, thanking the company Sibintel-holding “for the successful implementation of a large-scale investment project.

Selim Doguoglu, General Manager of the Russian office of Polin Waterparks, says Polin focuses on creating rides that deliver thrilling adrenaline rushes that keep guests coming back. “It’s a real honor to know that our attractions are helping our partners like Leto Leto Aquapark not just satisfy their patrons but gain their enduring affection,” he says. “It’s truly satisfying to see the comments guests make after experiencing our designs. We know we’ve succeeded when guests rate our partners’ parks with their highest reviews.”

Joe Kleimanhttp://wwww.themedreality.com
Raised in San Diego on theme parks, zoos, and IMAX films, Joe Kleiman would expand his childhood loves into two decades as a projectionist and theater director within the giant screen industry. In addition to his work in commercial and museum operations, Joe has volunteered his time to animal husbandry at leading facilities in California and Texas and has played a leading management role for a number of performing arts companies. Joe has been News Editor and contributing author to InPark Magazine since 2011. HIs writing has also appeared in Sound & Communications, LF Examiner, Jim Hill Media, and MiceChat. His blog, ThemedReality.com takes an unconventional look at the attractions industry. Follow on twitter @ThemesRenewed Joe lives in Sacramento, California with his fiancé, two dogs, and a ghost.
Share
Facebook
Twitter
Linkedin
Email
Print
WhatsApp
Pinterest
ReddIt
Tumblr
Previous articleConstruction begins on Holocaust & Humanity Center at Cincinnati’s Union Terminal
Next articleLEGOLAND California Resort guests dive into a new kind of adventure